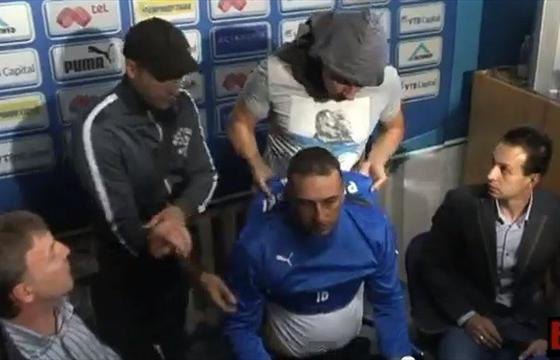 Bulgaria is a seldom discussed hot bed of football hooliganism.

Ultras have shown that the scourge is present in modern football by invading a press conference which saw Levski Sofia unveil new manager Ivaylo Petev this week and physically remove him from the venue.

The club had sacked Serbian Slavisa Jokanović earlier in the day (Tuesday) following a poorer than expected start to the 2013-’14 season.

The Ultras are said to believe that Petev is a  supporter of fierce city rivals CSKA Sofia, and therefore he is not welcome at the club by them.

With Petev’s first press conference at the Georgi Asparuhov stadium apparently going according to plan, several dozen hooded fans barged in and started to shout:  “You’re not welcome here. Get up, undress the shirt and go. Levski will not play under you as coach.”

With no security officials present, the fans then stripped Petev to the waist before ushering him out of the news conference and confronting shocked Levski chief executive Nasko Sirakov – a crowd favourite and the club’s all-time leading scorer.

In the aftermath of the incident Sirakov announced his resignation from the club stating: “This is the hardest day in my life,” in a heavily policed conference room. “But I wonder if there’s a place in the world where the fans choose the coach.”

“It’a stain on our club, this is unprecedented… But we stand behind our decision – Ivaylo Petev is the new coach of Levski,” Batkov told reporters.

The Blues, as Levski – one of the two most popular clubs in the country are known, are sixth in the standings with 19 points from the opening 12 games of the season, nine points behind leaders Ludogorets.

Petev, fired by Ludogorets after a surprise defeat in the opening round of the domestic championship, is Levski’s fourth coach this year after former Levski players Ilian Iliev and Nikolay Mitov and Jokanović.

Petev will have to deal with a hugely demanding and impatient fan base in attempting to guide The Blues to their first league title since 2009.

Sports radio shows in Bulgaria have been awash with the news as well as with fans of Levski phoning in and urging the return of the old coach Jokanović and demanding an explanation from Nasko Sirakov as to why Petev was appointed to the post in the first place. It remains to be seen whether a police investigation will be launched in relation to Tuesday’s incident.