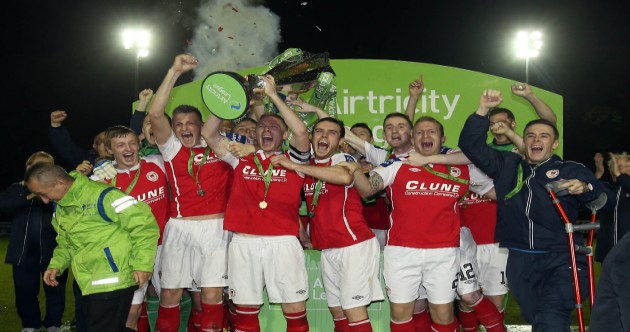 As the old saying goes, reaching the top of the mountain is one thing but staying at the summit is an entirely different ball game and that is the task the stares 2013 Airtricity League Champions, St.Patrick’s Athletic right in the face ahead of the new campaign.

Liam Buckley will once again take the reins at the Stadium of Light for the 2014 League of Ireland season but perhaps never has there been such expectation and excitement surrounding the “Saints” going into a new year with big name signings such as Mark Quigley and Irish international, Keith Fahey adding to the already hugely impressive Pats armour from last season.

With the Inchicore based side playing competitive games in the Leinster Senior Cup (against Dundalk too, so expect an extra edge in that ever growing rivalry game), Setanta Sports Cup and the re-established Presidents Cup against last season’s league runners up, Sligo Rovers, “Bucko’s” men should come into the new league campaign sharper than most League of Ireland sides and this could play a role in helping the “Saints” establish an early lead over their title rivals, of which there could be up to five teams involved in the title tussle this season with Sligo, Dundalk, Derry and Shamrock Rovers all expected to challenge in 2014.

The Champions open the 2014 Airtricity League title defence with a very tough looking away trip to Turners Cross, a ground they suffered one of only two defeats on last season before successive home games to UCD AFC and Limerick FC respectively. Derry City (A), Dundalk (H) and Bray Wanderers (A) make up the Dublin sides opening six league games with those middle two fixtures against last season’s main challengers of Derry and Dundalk real mouth-watering prospects for followers of the domestic game.

It’s more of a case of who’s back rather than who’s new for St.Patrick’s Athletic supporters this season as club legend, Keith Fahey returns alongside the mercurial talent of Mark Quigly while the additions of Lee Lynch and Conor McCormack really does add a whole new dimension to the Pat’s midfield this season.

The loss of rock solid centre-half, Connor Kenna brought an early blow to the Richmond Park faithful during the off-season, especially considering the “Saints” consistency in the back four last season and ability to keep clean sheets was one of the driving forces behind their league triumph in 2013. However, the addition of the greatly experienced Ken Oman and the forward thinking central defender, Derek Foran gives manager Liam Buckley plenty of options again in his defence this season with star performers Ger O’Brien and Ian Bermingham both retained during the close season.

While Killian Brennan took most of the acclaim in the Pats midfield last year for his match winning and in turn title winning performances week in week out, none of that would have been possible without the showings from Greg Bolger in the engine room as he did all of the dirty work and allowed Brennan to shine. The addition of McCormack, who showed what he can do during league winning campaigns in 2010 and ’11 at Rovers, will give Buckley peace of mind should the likes of Bolger miss games through injury or suspension this season while Keith Fahey and Lee Lynch can pass the ball to death if they please in oppositions final third.

In the build-up to last season, most of the leagues pundits stated their concerns that St.Pat’s may not have what it takes in terms of out and out goal scoring strikers to claim silverware in 2013 and while the Champions may have lost Anto “Bisto” Flood to emigration ahead of this term they have added one of the country’s most talented attacking players in striker, Mark Quigley. Despite a torrid time in Tallaght last season, Quigley’s title winning form of two years ago with Sligo Rovers was more than enough to convince Liam Buckley to give him another shot at Richmond Park and with the supply lines open to him in this St.Pat’s team, he should flourish once again at his former club.

Free-flowing, open and attractive football is the only way the game will be played at Richmond Park this season so expect very little change in that aspect from Liam Buckley’s troops. However, with the addition of Fahey and Quigley and to a lesser extent, Foran (who loves to play it out from the back and get forward himself) and Lynch, we may see the “Saints” play at an even higher tempo this term and attempt to get the ball into the opposition half much much quicker, similar to the slight tweak in tactics we saw from Michael Laudraup at Swansea when he took over from Brendan Rogers two seasons ago.

No surprises here with the returning “Saints” hero, Keith Fahey potentially being the key between a good and a great season for the defending Champions. The motivation to build on his 16 international caps is sure to drive the English League Cup winner on to top performances this season with Athletic and should he add goals to his already top passing ability, League of Ireland defences could be in for a torrid time in 2014.

At this stage we are all aware of the talent that is Chris Forrester and St.Pat’s fans will be expecting an even better showing from the young winger this season but it is the addition of Lee Lynch that has really caught my eye as the former Sligo Rovers midfielder really is a passing machine with long range “zingers” just as simple for him as a square five-yard pass.

Still only twenty-two-years-old, Lynch holds two Irish underage caps to his credit and it’s not difficult to see how he earned himself fifty-seven league appearances for a fantastic Sligo Rovers side in the last two seasons as his ball retention and play making skills really are a joy to watch while the nine goals registered in that time period also illustrate he is capable of adding that dimension of the game to his attributes as he continues to develop in the coming years.

This is one of the best midfields constructed in recent memory by Liam Buckley and with one title under their belt it should now be a lot easier come the cut and thrust games towards the tail-end of the campaign for St.Pat’s to deal with the pressure. I can’t look past St.Patrick’s Athletic for the league title again this season, although “Bucko” will have to show his man management and squad rotation skills in 2014 as he attempts to juggle league, cup and European adventures with expectation at an all-time high in Inchicore.