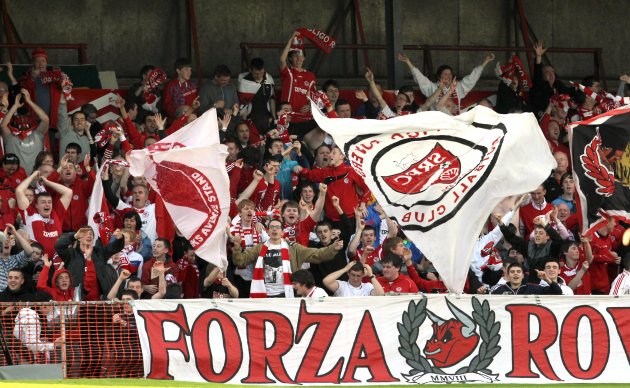 Truth be told, it was always going to be an arduous task for Sligo Rovers to retain their league title last season. And so it proved as it was a superior St Patrick’s Athletic outfit who instead took home the crown as the chasing pack wilted in the closing stages. Despite the fact that Rovers began the league campaign excellently by storming to an impressive eight match winning streak, their powers began to wane noticeably towards the business end of the league season .

Of course, finishing third is still nothing to be sniffed at and the self-belief to better that performance remains as strong as ever.

In a league that can often be quite unpredictable from year to year, Sligo Rovers look as though they are on the right road to finding that all-important consistency. And with a very talented core group of players at his disposal, Ian Baraclough has the right utensils to win back the trophy they lost so disappointingly last year.

Their opening friendly fixture of the season recently played against a newly set up Galway FC side ended in a shock 5-3 loss in Mervue. To lose against a fresh First Division team who haven’t had much time to settle together and gel may not be the best preparation ahead of the new season but it’s still difficult to bet against The Bit O’ Red pushing all the way to knock St Pat’s off their perch, particularly considering they won the reverse tie 2-1 at the Showgrounds quite recently.

An inability to defeat the Premier Division’s eventual winners at any stage in the league provides us with a little insight into the psychological battle that could turn out to be an important factor over the course of the year. If Sligo can prove they’ve done enough to close the gap when the sides meet in gameweek 11, they’ll feel far more upbeat as the season unfolds. Of course, before that they face a testing opening day fixture at home against First Division champions Athlone Town which they’ll be keen to navigate past without too much difficulty.

Realising that some freshening up was clearly needed in the wake of their limp relinquishing of the title, Baraclough has drafted in a number of exciting players to boost their hopes of once again winning some silverware.

Importantly, Sligo have held on to most of the players that have proven to be very vital cogs over the seasons – although a number of key departures will likely have Baraclough fretting over the tactics whiteboard in the run-up to their initial competitive fixtures. With a host of key players renewing their contracts already, many fans will be glad to hear that the new additions are likely to get tremendous guidance from those that already know the ropes. Many of their new signings will gladly lap up much of the title-chasing wisdom that the likes of Rafael Cretaro and others can bestow upon them.

With an FAI Ford Cup triumph still fresh in the supporters’ collective minds, it will be vital to remember exactly what these players are capable of, and with that, the new arrivals are likely to feed off their confidence and self-belief as Sligo look to build up ahead of steam coming in to March.

With Ruairi Keating, the Sligo Rovers U 19 side’s top scorer, joining their ranks, the 2012 champions have done their best to add some fire-power to their ranks. Although still young and not having fully developed his all-round game, it will be interesting to see exactly what he can bring to the table in Ireland’s top tier. If he can show some steady signs of progress in pre-season, it’s possible he’ll see some first team game-time as a substitute come the new season. Exciting times for the striker, no doubt.

And that’s just one good example of the type of progress that Baraclough and his backroom staff are constantly striving for. News of an all-weather pitch and other state-of-the-art, modern features on their way to the Showgrounds over the next few months is another sign of just how focused all involved are in pushing for sustained development.

Keen to get the ball down and pass it around whenever possible, Sligo Rovers have a penchant for playing some rather attractive football. Never a side to give up and let a match pass them by as underlined by their never-say-die attitude in the FAI Cup final, they possess a level of tenacity that has often benefited them when others would relent.

Should they successfully combine their polished play with their great attitude, Sligo will prove a tough nut to crack once more. Losing cup hero Anthony Elding to Cork City means that they are down a proven goalscorer, but with some new blood coming through as well as a strong spine still present in the squad, they have some promising back-up to make up for his absence.

Elding notched up a dozen of Sligo’s goals (he was their top scorer), so it is a sizeable gap to fill and one that they will need to address and resolve quickly if they are to convert the chances their skilled midfield are more than capable of serving up. The move of Lee Lynch to rivals St Pats is also an intriguing transfer that could take some time to replace.

Joseph Ndo has been a constant source of good fortune over the past few seasons and this year should prove no different. At 37 years of age, Ndo still looks a player with bags of class to offer – his displays in the red of Sligo are often nothing short of poetic as he glides between the midfield and attack, always on the lookout for a goal-scoring opportunity or to create a chance for a well positioned team-mate.

With Ndo in their squad, Sligo often have the edge when it comes to winning the midfield battle and although they may have to conserve his talents a little more this season than at any stage previously it’s possible his impact will be even bigger than ever before when he does line-out.

A former Coupe de France winner and already well versed in the art of how to win an Irish league title, the Cameroonian star should once again pop up with more than his fair share of stand-out performances.

His recent goal from a corner in Sligo’s loss against Tommy Dunne’s Galway FC provides us with a timely reminder of just how capable Ndo is of putting his stamp on any given contest – exactly how much he has left in the tank, however, remains to be seen.

New signing Eric Odhiambo is the one to watch for the Bit O’ Red this forthcoming season. At 24 years of age, he still has his best years ahead of him while Baraclough will be looking to ignite a career that had begun to stagnate in recent times. Having not really been offered ample opportunity to impress at any of his former clubs, the English player will be keen to demonstrate to the Showgrounds faithful exactly what he’s capable of when given game time.

Clearly, there is a real chance for the former Invernesss Caledonian Thistle winger to force his way into the starting line-up. Already, he’s he hit the ground running.

Bagging a tremendous hat-trick in Sligo’s 4-1 victory over Crusaders in the Setanta Cup has shown everybody involved at the club exactly what he has in his locker.

It will certainly be no harm for all at the Showgrounds to have a lively flanker amongst their ranks as they look to strengthen all aspects of their game, and vitally his arrival could potentially add an unknown element to the side as they look to wrong-foot their opponents at every possible turn. If he can chip in with some teasing deliveries along the way as well as continuing to improve on the goal-scoring dimension of his game, Odhiambo could turn out to be the revelation of the season and a really astute January purchase.

Last season, it was their performances against title rivals that really let them down, and although there wasn’t that much to separate them from top spot, dropping eight points against St Pat’s can be viewed as one of the main reasons they failed to keep the pressure on right up to the wire. And with Liam Buckley strengthening his side with the marquee signing of local hero and Ireland international Keith Fahey, Sligo have their work cut out for them once more.

However, a new season brings fresh challenges for everyone and while we’ll know a little more about the main contenders come the mid-way point of the season one can already expect Sligo to be in amongst the top three whenpush comes to shove. A burden on Danny North up front is a real cause for concern, however, so expect Rovers to look  to their midfield for supplementary goals as well as giving extra run-outs to some younger starlets. For their fans, they’ll be confident they can topple St Pat’s but a weakness in the goal-scoring department might just come back to haunt them. Watch this space.