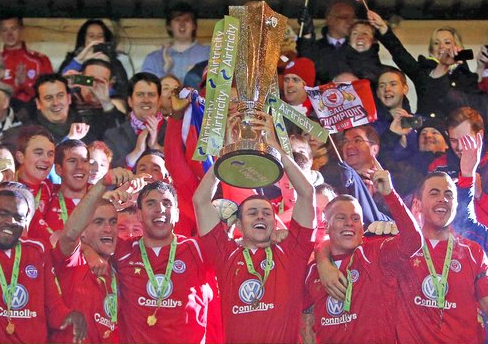 Pre-season guides are usually strange things. They’re full of platitudes and clichés, with “X team have big hopes this year” and “Y club should fear the worst” doing the rounds a lot.

One of the more interesting parts of a pre-season guide is when a fan is asked for their hopes. You’ll get wild optimism – “I think we’ll win the league, and beat [insert rival here] 4-0, twice” and you’ll get people who are always going to see the worst in their club – “we’ve got no hope, no money and no fans: we’re going down”.

League of Ireland pre-season guides are an even more peculiar things. It’s not that they’re particularly interesting – they’re just as cliché-ridden, for the most part. But the clichés change. The one you’ll hear most often is a variation on this: “my only hope for the season is that no team goes bust”.

Of course, that’s not their only hope. Most people want to fill their stadium, win the league and thrash local rivals. Among Irish fans though, there is a genuine feeling of fatigue though. Fans are sick of lurching from one crisis to the next, sick of asterisks on the league table.

Whisper it, but there might just be some hope of finishing 2013 with as many league clubs as started the season. The FAI seem to be a bit more strict with licensing this season, having been burnt by the Monaghan United debacle last season.

Dundalk were only granted a conditional licence to compete in the Premier Division, amid concerns over their new ownership. From the outside looking in, it seems like most clubs have abandoned the short-sightedness of the past.

On the pitch, there is much to be optimistic about. The last three seasons have seen incremental growth in media coverage, although this hasn’t been really reflected in general attendance figures yet. Last season saw Sligo Rovers win their first league title in 35 years, playing to a packed Showgrounds and enjoying massive support across the north-west.

St. Pat’s, Drogheda United, Derry City and Cork City all had relatively successful seasons, and a fairly exciting season took the bad taste out of what was a pretty bad summer for Irish football otherwise.

Those two sides aren’t perfect – Shamrock Rovers could suffer if Mark Quigley or Ciaran Kilduff doesn’t step up to fill Gary Twigg’s boots and the Bit o’Red look like they might rely a lot on Danny North up front – but both are good bets to win the league.

Of the other three, St. Pat’s look the best-equipped to mount a serious challenge this season. Liam Buckley has added to an already strong squad, with Conan Byrne, Shane McFaul and Killian Brennan replacing the Tallaght-bound James Chambers and Sean O’Connor. The Saints won admirers last season by playing attractive passing football, but suffered through inconsistency. If they find form early in the season, and manage to sustain it, they’ll be a match for anyone in the league.

Drogheda United were last season’s surprise package, but a repeat of their second-placed finish would be an equally big surprise. Mick Cooke has bought well, with the likes of Gary O’Neill and David Cassidy augmenting the talented Drogs squad. A top four finish seems attainable, given their strength in depth, but when faced with tougher opposition Drogs might just fall short.

An FAI Cup win and a rallying finish to last season put gloss on a fairly mediocre campaign for Derry City, with the Candystripes well off fourth place. Expectations are always high around the Brandywell, and the retention of Barry McNamee and Stephen McLaughlin (whose moves to Nottingham Forest broke down in the off season) should buoy those hopes. They have a strong starting side, with Declan Devine adding some depth in the transfer market, but City might be tested by the sheer amount of matches – especially with the prospect of a Europa League run in sight.

Below the top five, it’s really anybody’s guess. There’s always room for a surprise package in the Airtricity League, as Drogheda showed last season. Bray Wanderers, UCD and Limerick will be aiming to stay up. UCD and Bray have ample experience of relegation fights, but both have lost key players in the off season.

UCD have a habit of unearthing talented players from their scholarship programme, but they will need a few of those players to shine if they are to stay up. The Seagulls, meanwhile, still have a number of players like Marty Waters who are capable of scoring. Whether they can stop going goals in is another matter altogether though – only Dundalk conceded more last season.

Speaking of Dundalk, they aren’t expected to be quite as forlorn as last season. New ownership, a new manager in Stephen Kenny and the arrival of players like Keith Ward and Richie Towell have given new hope to Dundalk. It wouldn’t be a surprise if they were to flirt with relegation this season, but mid-table seems feasible.

Limerick are another side with a wave of optimism swweeping over them. Thomond Park will be their home the season and while they would do very well to even fill it to a quarter of its 26,500 capacity, playing in the home of Munster rugby still represents a massive PR coup for Limerick. The Shannonsiders had a strong side when they won promotion last season and the addition of Danny Galbraith should help them stay up.

Of the other sides; Cork City, Shelbourne and Bohemians, any could make a challenge for European competition if they stay injury-free and find good form. With bad luck, though, any of the three clubs could be sucked in to a relegation fight. Cork City look best-equipped. The arrival of Daryl Kavanagh and Danny Furlong should lend the Rebels more craft in attack, but they will still rely on the returned Denis Behan to replace the goals of Davin O’Neill and Vinny Sullivan. Behan has a fairly good record on Leeside, but he wasn’t exactly mercurial last season in the First Division for Limerick.
Shelbourne had a fairly mixed season last year in most onlookers’ eyes and could be in for more of the same. While survival was the aim in their first year back in the Premier Division, many fans weren’t happy with their eighth-placed finish. This season, club stalwarts like Dean Delany and David Cassidy have left, being replaced by new players. Shels do seem to have a better mix of young and old now, but their hopes will hinge on their new players gelling together quickly.

Most of Bohemians’ young squad have stuck around, with the likes of Stephen Traynor, Roberto Lopes and Keith Buckley all set to play in red-and-black again this season. Aaron Callaghan has signed the duo of Dean Delany and Stephen Paisley from Shels, who should bring solidity – although Evan McMillan is still a big loss in defence.

At this early stage, the signs are encouraging that this might just be a very good season for Irish domestic football. There’s always the chance that any club will plunge into financial crisis – but for now, optimism can reign.

For more thoughts on the League of Ireland in 2013, check out our latest podcast.