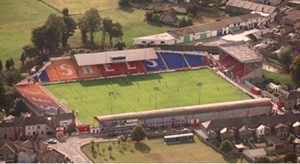 “Isn’t that just typical of the Premier League?” barked Sky Sports’ Martin Tyler moments after Arsenal, having trailed for most of the match, pulled back to within a goal of their tie with Everton last Saturday.

It’s a familiar refrain in the most heavily-marketed league in world football, where any event from the most mundane to the most unlikely is proclaimed to be a unique event in contrast to other leagues in Europe where, presumably, all games are settled by the hour mark and the two sides agree to shake hands and begin their warm-down early.

The phrase “typical League of Ireland” carries altogether more negative connotations: for instance, when a game is abandoned because the penalty spot, having been dug up early in the evening, hasn’t been replaced to the satisfaction of the referee.

Or, after a floodlight failure, fans are left sitting in the ground half an hour after the scheduled kick off, oblivious to whether the game is due to go ahead, while Gardaí are busy turning away late arrivals as the match has already been abandoned.

Or, when a club is fined the guts of two home gate receipts after, in spite of repeated warnings from UEFA official and appeals from stewards and club representatives, a small group of fans insist upon waving a banned flag and undo much of the positive publicity their title charge has hitherto generated.

Whatever about the rights and wrongs of UEFA’s decision to levy an €18,000 fine on Dundalk after a small – and unrepresentative – pocket of individuals affiliated to the Shed Side Army supporters’ group chose to fly a Palestinian flag during their home European tie with Hajduk Split, the fallout compounds the damage of what had already been a depressing couple of weeks for football in Ireland.

The League of Ireland is the victim of a serious image problem, helped in no part by the public’s worship of English football, and it says far too much about Irish football that the only way the domestic league can grace the back pages of national newspapers is when an embarrassing event occurs like the postponement of Bohemians’ league tie with Shamrock Rovers or Dundalk’s inability to rein in their own fans.

The greatest shame is that these repeated off-field transgressions – compounded this week by the postponement of Shelbourne’s FAI Cup replay with St Patrick’s Athletic after the floodlights at Tolka Park failed and smoke was seen rising from the generators – deflects from what has been the most exciting and high-quality league season in recent memory.

Stephen Kenny’s young side lost the aforementioned clash with Hajduk at Oriel Park 2-0, despite having dominated proceedings, and went on to win the away leg 2-1 and only narrowly lose out 3-2 on aggregate, a tie they arguably deserved to win despite their vastly inferior financial resources.

As Bohemians and Shamrock Rovers fans trudged home from Dalymount Park, the former St Patrick’s Athletic assistant coach Martin Russell was busy guiding his new club Limerick to a deserved 1-0 win over the defending champions in Richmond Park, effectively ending their defence of their league title.

Cork City – the surprise package of the league season and boasting in their ranks the Premier League-bound right-back Brian Lenihan – had been pegged back by a resilient Bray Wanderers team, while free-scoring Dundalk were forced to scrap for a late equaliser at Sligo, who have recovered from a devastating start to the season to once again resemble the side who’ve won a league or cup in each of the last four seasons.

Shamrock Rovers, meanwhile, having ended their ill-suited relationship with manager Trevor Croly, have spent big and recruited Pat Fenlon – the most-decorated currently active coach in Irish soccer – to revive their ailing season, and in spite of a poor draw at bottom-placed Athlone he has already overseen an upturn in his underperforming side’s fortunes.

Scouts from top English clubs and beyond, as well as national team managerial duo Martin O’Neill and Roy Keane, are regular visitors to Oriel Park, Turner’s Cross and Richmond Park, and it’s likely that players like Christy Fagan, Richie Towell and Andy Boyle will follow Lenihan across the Irish Sea in the coming months.

With the destination of the Premier Division trophy still very much in the balance – and terrific football being played across the board – this should be a time of celebration for the League of Ireland, and the long-suffering Irish football fan should be able to speak with pride about the action that’s taking place on fields up and down the country.

Instead, match reports are buried behind bad news stories. Dalymount Park, for decades the home of Irish football, is struggling to put on two games in a calendar week. Tolka Park, just up the road, is even worse. Condemned stands and third-world facilities pockmark both arenas.

Stephen Kenny has worked miracles in a town where fans, barely two years ago, were contemplating the demise of their famous football club as they faced relegation and an insurmountable funding shortfall. Now, they play in front of crowds drunk on genuinely exciting modern football rather than inferior Harp lager.

But with so much positive action taking place on the field of play, it’s a shame that the fields themselves are so woefully inadequate – Bohemians haven’t employed a groundsman in two years, and Tolka likely hasn’t had one for close to a decade – and off-field events continue to dominate the image of domestic football.

It’s a situation the clubs must take a large chunk of the responsibility for, but the national association has a role to play as well if the talent within the league is to be fully realised, or if we’re forever doomed to be a feeder state for the lower leagues in England, and just the “typical” League of Ireland.