Recent pop and science culture have coined the term ‘Lazarus’ as an apparent restoration to life.

The original term was based on a figure from the bible, Lazarus of Bethany, the man who the great trailblazer Jesus supposedly restored to life four days after his death.

Since then, it has featured in another great trailbrazer’s work, David Bowie as well as fellow musicians The Boo Radleys, Chimaira and Placebo.

It has featured in popular literature, most notably Sylia Plath, and in television, featuring in the series The X Files. Now it will refer to the revival of Galway United FC. 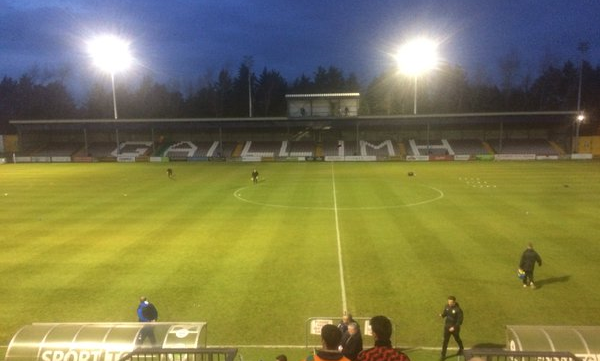 On March 11th 2016, Galway United are top of the Airtricity Premier Division after beating Bray Wanderers 4-0 at the same ground. A club which collapsed and folded re-emerged from their death to top the premier table in two years.

Manager Tommy Dunne has been leading that recovery. When asked about the turnaround Dunne said:

We’ve been trying to progress the club, I think everybody who was involved, particularly the people originally that were put together to put the entity back and get Galway football back going, you’d have to congratulate them.

I think the work that’s been done off the pitch, as much as what we’re doing on the pitch, is great. We’re a club, we’re trying to be united, like the name.

People in Galway when they look at their sports they want their teams, Connacht, the footballers, the hurlers, they want to win. That’s why we do it, we want to win. We’re not here to make up the numbers.

For the home side this was dominant, flowing, energetic football. Groundsman Noel Connolly’s dedication to his craft resulted in an ideal playing surface.  Yet Bray Wanderers were resolute in the face of sustained pressure and got to half-time without conceding.

As much as remaining level was down to Bray’s doggedness it was also due to Galway’s inability to convert chances. First Colm Horgan and Gary Shanahan linked up well to force an early corner.

On the opposing wing, Kevin Devaney’s powerful runs had Sean Harding in real trouble. Persistent pressure forced Peter Cherrie into some acrobatic saves while Conor Kenna picked up an early yellow after cutting down a through on goal Shanahan.

The impact of last season’s star man Jake Keegan’s departure has been well discussed however on the basis of this game, United have found a suitable replacement in Kevin Devaney. His positive attributes are infinite, technically brilliant, fast, hard-working and accurate.

Galway continued to ruthlessly attack the flanks, pelting the Bray goal with numerous crosses. Vinny Faherty spurned several chances, the best of which involved a cross from Devaney towards the back-post which found Faherty unmarked. Yet he enigmatically headed wide.

It was much the same after the break. Galway persisted with the wide attacks, Bray continued to hold on. The whole affair was like a lion stalking it’s visibly inferior, yet exasperating, prey. The sense of inevitability was over-powering.

Technically this approach was perfect. Over-laps were created, up front Curran and Faherty ran intelligent lines. It was intricate, incisive build-up that was hindered by a consistent knack of failing to hit the target.

Thus this encouraging attitude was to no avail. The attractive gymnast that is Galway would intricately sway across the mat with genius creativity and allure, only to clip its own heel at the finish and collapse into an incomplete heap at the feet of the judges.

That trend continued right until the hour mark. But then Devaney got his and his teams deserved reward when he collected a throw at the edge of the box, turned and rolled the ball back towards the goal before coolly slotting the ball into the fair corner.

Rather than accept this blow lying down, Bray fought back and created quite a few chances of their own. Hugh Douglas went close with a header from a corner that glanced the post.

A lopping cross looked destined for an unmarked Karl Moore on the edge of the six-yard box only for Shanahan to skilfully intercept having ran forty yards back to get there.

Galway dug in and eventually cut loose in the final six minutes. First, a Colm Horgan cross was turned in by Paul Finnegan for an own goal.

Vinny Faherty finally found the target when Bray goalkeeper Peter Cherrie came out to meet a through ball only to fail and watch helplessly as Faherty’s chip careered over his head.

Sub Ruairi Keating completed the rout when Captain Ryan Connolly squared the ball back and his deflected effort fired past Cherrie and inside the near post.

For Bray Wanderers, it is two loses from two now. They were not helped by early injuries and encouragement can be sought in the fact that the new arrivals look like shrewd recruits.

For Galway United, It is the first time in quite a while that chants of “we’re going to win the league” have rung out around Terryland and not been met with ironic laughter. It is early days, but early indicators point towards a promising season in the west.

If there is any negative from this miraculous revival it is this. On that day in 2014 the attendance was 2418. Tonight it was 1627.

Jesus is reported to have called “Lazarus, come out” to instigate his revival, and Tommy Dunne has in fact urged the very same consistently of the local population. (Calling Galway people out, not Lazarus as that wouldn’t make any sense at all.)

The club’s recent recruitment looks to have added enviable strength to the squad and they are poised for a successful campaign, but the fan-base, while loyal, remains small.

Let the people come out and rejoice, for Lazarus resides in Galway.