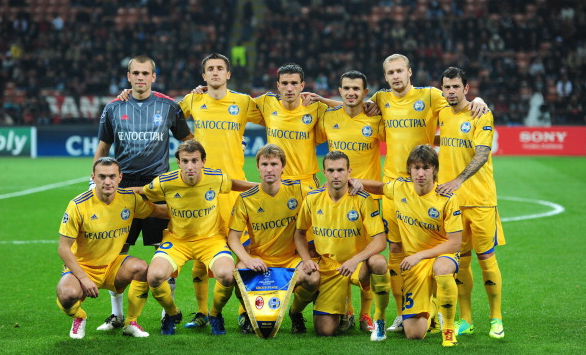 Any town or city worth it’s salt in Russia will have at least one store selling Belarussian products, either textile or dairy.  Traditionally a rural-based economy with powerful pockets of industry, the fertile soils, so fought over by empires through history, have begun to flourish with footballing talent that are gaining more plaudits abroad than their big neighbours to the east.  And what has been happening there may well give a little guidance to our own league and clubs back in Ireland.

In the 2003-4 Champions League qualifiers Bohemian FC beat BATE Borisov  3-1 on aggregate which shone a bright light on how the club was developing.  Just to win a first league title (in 1999) showed how far they’d come having been a 3rd tier team in 1996.  A second title in 2002 allowed them to play the Irish champions and for the following 3 seasons the hattrick eluded them.  The club didn’t waver, they built from a very well structured youth system and bringing in position specific players to not lose sight of the long term view of being self-sufficient and profitable.  In that one sentence most Irish and UK followers of football will be lost by the words: “very well structured youth system”, “long term view”, “self-sufficient” and “profitable”.  What is an anathema to many is not so to the President of the club Anatoli Kapski.  A chance meeting with the man at the Kremlin Cup tennis tournament last year came almost a year after I’d listened to a leading Irish coach extol the virtues of the BATE Borisov model to investors in an effort to keep his own club alive.  The investors bought it and if not for a politically motivated trigger finger, an Irish club could well have “done a BATE”.  With solid start up, wisely used investment, there is no reason why not.

Relating the tale to the BATE owner he laughed and told me of how almost 2 decades earlier he’d seen the USSR collapse and Belarus become a financially and politically insecure country with an identity crisis.  He viewed sports as being a way to unify the people and while many stars had previously come from the republic, a lack of investment was crumbling facilities into the black soil.  Bankrupt in 1996, the works team of the Borisov Works of Automobile and Tractor Electrical Equipment factory, had no glorious history (apart from 3 Belarus Republic titles in the 1970’s) to draw upon from it’s 23 year existence so that Anatoli began to map out a future free of hang ups of entitled/big club syndrome.  As one of the factory heads (now one of the owners) he worked a parallel model.  Invest in a senior side to get up to the top level of the new Belarus football pyramid, yet keep young players in the area and make them ready for the 1st team.  A blueprint was set out that the head coach of the senior team would set down a tactical plan for all the youth sides to follow, that he would oversee the coaching of the coaches and have daily reports from the youth section.  This, the BATE President said, was the making of the club.  All head coaches are signed to a minimum 4 year contract and the club commit to the coach, and his plan.  He said he was ridiculed when he appointed the unknown Yuri Puntus in 1996.  Those who knew better laughed at the coaches lack of playing and coaching experience, though Anatoli liked his mentality.  Puntus agreed with the model and given his background in technology and engineering, he saw the business in a very clear light.  Money can be thrown at senior players, or at fancy academies, but the machine didn’t work unless supporters bought into it, sponsors liked what they saw, and fuel, in the form of young local players, was refined to high octane.

Successive promotions in 1996 and 1997 brought BATE to the top table where the provincial side playing in a tiny stadium were expected to be whipping boys.  They shocked the nation by finishing 2nd with the smallest budget in the league.  A quick investment saw them win the league in 1998 but suffer a severe 12-1 aggregate loss to Lokomotiv Moscow in the UEFA Cup.  Until the end of Yuri’s tenure in 2004  BATE never finished lower than 3rd in the league, with that 2nd title in 2002, and grew little by little in European competition.  The loss to Bohs in their opening match in 2003 was matched by an immediate exit in 2004 to Dinamo Tbilisi and Anatoli saw that a new man was needed to head up the project.  Financially the club were breaking even and while crowds were rarely above 4,000 for home matches, the 2nd generation of youth players were breaking through the ranks.  Puntus’ assistant stepped up to the role (having been half a year as a caretaker) and Igor Kriushenko established BATE as THE club in Belarus.  A 5th place finish in 2005 was brushed over by the double in 2006.  Kriushenko led the club to the title again in 2007 and this year the club are in pole position to complete a 7-1n-a-row and hand them their 9th title, 2 more than capital giants Dinamo Minsk.  It was Dinamo who snatched Igor from BATE in a controversial move, and when it didn’t pay off immediately he was let go.  Igor showed his mettle in Russia by winning promotion with Sibir Novosibrisk to the Premier League and to the Cup final.

In true, shall we say, Liverpool bootroom style the man who took up the mantle had joined the club for their first year in the top flight. Victor Goncharenko was 30 when he took over and took the club to the promised land in 2008-9, making history in the process.  With tight wins over Valur (Iceland), Anderlecht (Belgium) and Levski Sofia (Bulgaria) BATE made it to the Champions League group stage and what a group they got!  Real Madrid, Juventus and Zenit meant big crowds at home and so the Dinamo stadium in Minsk was opened for the cause.  Draws home and away with Juve, and an away draw with Zenit meant 3 points and enough money to run the club for a decade, according to the President.  At 31 Goncharenko became the youngest head coach of a team in the Champions League and he did this with almost an entirely local group of players.  The next season they dropped into the Europa League group stage and faced Everton and Benfica.  A year later and they were once again in the Europa League groups and finished behind Dinamo Kiev to make the knockout stages and lost 2-2 on away goals to Paris St. Germain.  In 2011-12 the Champions League Group once again looked after BATE with Barcelona and Milan as opponents.  This year they’re in the play-off with an Israeli side (and leading after the first leg).  Victor is still in charge and has taken a Brazilian, Maycon, on loan to bolster the attack as well as re-signing ex-Arsenal player Alexander Hleb.  Along with Maycon the club have just 2 other foreigners, Marko Simic (a 25 year old Serbian central defender) and Zaven Badoyan (a 22 year old Armenian winger).

So where has it all gone right?  Anatoli Kapski said it is very simple.  1.  Make a strong initial investment, 2. Combine your youth and senior structures, 3. Trust your coach, 4. Engage the community, 5. Don’t panic, 6. Engage the local government.  With a population base of just 150,000 to draw on BATE have been able to compete with bigger and wealthier clubs, Kapski said that they do this by re-investing in youth and facilities.  In a country where sports represent the way out for young people, it has value.  Belarus currently have the top female tennis player in the World, another in the top 100 and a stream of talented Juniors making an impact lower down the ranks (including 2 who train out of Dublin).  President Lukashenko has an unenviable task trying to develop a country which still suffers from the Chernobyl disaster (the Fathers of Hleb and Goncharenko both suffered from working after the reactor explosion).  An IMF dig out last year stabilised the country and while sports have had to face cutbacks, the government have continued to focus on sports, art and culture to provide their 9 million plus citizens with a distraction, and pride.

At the summit of Belarussian football National Team Coach,  Georgi Kondratiev, was the leading striker with Dinamo Minsk when they won the USSR top flight in 1982 and cut his teeth with his old club as a coach before moving into the Federation youth structure.  He guided the Under-21’s to the European Championship Finals in 2009 (where they failed to make the knockout stages) and again in 2011 where they played sparkling football and were very unlucky to lose in extra-time to eventual winners Spain.  They did beat the Czechs to qualify for this Summer’s Olympics where Kondratiev led them to losses against Brazil and Egypt after an opening win against New Zealand.  Kondratiev has stated that the aim for the upcoming World Cup qualifying campaign is to finish 3rd and with Spain and France in the group it looks a very sensible goal.  Georgia and Finland will prove no pushovers though with the experienced Yuri Zhevnov skippering the side goals will not be given up easily.  Belarussian players are scattered throughout the Russian leagues and further afield while the bulk of players are home-based.  And this is where a political angle is going to stymie progress.

BATE are being pushed on the domestic front by Gomel (Liverpool’s victims in this years Europa League) and Soligorsk, while Dinamo continue with managerial merry-go-rounds and internal bickering.  Dinamo will be lucky to qualify for European football next year and have a relatively weak squad, yet the National team is staffed by their ex-coaches and players (current and past).  Not since Yuri Puntus in 2006-7 has a National team coach been without the strings of the Dinamo-led Federation and this is a stick beating Kondratiev’s back.  Should he take a chance on Gomel’s passmaster Dzmitry Platonaw or rock-solid Ihar Kuzmyanok, Georgi will be proving he is not just a Federation man.  He had his under-age teams play an open, tough and attractive brand of football, this month’s friendly win in Armenia was more of the same.  The general feeling in Belarussian sports media and the football community is that if he wants to make Belarus more competitive he has to remove the Dinamo burden.

Five years on from that aggregate loss to the Irish Champions BATE have been twice in Group Stages of both premier European competitions while Bohs have won just 1 of 9 European ties, suffered an economic meltdown and are rebuilding under the guidance of Aaron Callaghan.  BATE have a production line of talent that (given the starting base) competes well with the European heavyweights and the club compare far better in the bang for buck stakes.  In a country where sports are seen as a complement to life – whether on the farm or in the factory – their top football club have proven that an investment now in youth and community have rather attractive payouts further down the line.  Maybe not just dairy, textile and Academy products are making good as exports, the proven ideas of how to grow a football club might just catch on in places where such ideas are badly needed.

One thought on “Land of milk and vests – Belarus rising”