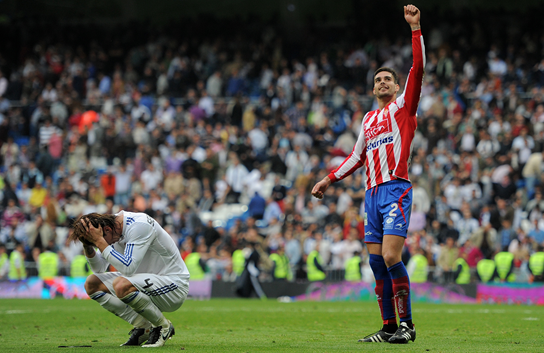 When José Mourinho decided to pick a fight with Manolo Preciado back in September, who would have predicted that the gruff Sporting técnico would have the last laugh in deciding the destination of this year’s championship, destroying the longest undefeated home league managerial record in history in the process? Not many, is the answer; Joseph Sexton is back to tell us why La Liga really is done and dusted this this time.

It had to happen. Nothing lasts forever. But what a ride it was. No other coach in the history of the sport could boast of such an achievement as that of of José Felix Mourinho; and it’s unlikely anyone else will. 150 home games. 0 defeats. From a 3-2 reversal exactly one month into his tenure at FC Porto on 23 February 2002, until Sporting Gijón rolled into the Bernabéu the day after April fool’s in 2011. 9 years, 1 months, and 10 days it took. And it was fitting that it was Manolo Preciado, the rugged, no-nonsense Sporting coach, who was in the opposite banquillo when the unthinkable occurred.

Let’s cast our minds back to last autumn, to the genesis of the simmering feud between the pair. Mourinho, as brash, brazen and outspoken as ever decides to tear Preciado a new one. His rival’s crime? To have fielded a weakened team at the Camp Nou. Never mind that Sporting had really put it up to Barcelona, coming away with a creditable 1-0 defeat. Mou was on the warpath. Only, this time, he’d picked the wrong target.

Mourinho, in no uncertain terms, accused the proud Cantabrian of effectively throwing the game. This fits, of course, neatly into the claims of pro-Barça bias to which the Madrid press appear forever beholden, and which the irascible Portuguese has done nothing to dampen. Sporting, he effectively said, had won the league for Barcelona. 6 months later, this statement would be proven correct; just not in the manner which Mourinho might have expected.

To begin with, Preciado was non-plussed. But in the build-up to last November’s meeting between the sides, as Mourinho kept on chipping away, he finally exploded. “Listen, when I heard this first I thought maybe he was misquoted. But now with no humility, and no retraction he keeps talking this crap? Who does this bastard think he is? If Real won’t tell him how he should carry himself, I’ll be more than happy to. He’s a smartarse.”. A “canalla”. A “see-you-next-Tuesday”.

What ensued next was entirely predictable. With Mourinho conveniently serving a touchline ban, the crowd bayed for blood. Plucky Sporting played out of their skins. As it was, Aitor Karanka, no shrinking violet himself prowled the visiting technical zone with all the menace of a girl guide. The action on the pitch was fierce, at turns brutal, but always compelling. Sporting could have won it; in the end, Madrid did. But only just. And the war wasn’t over either.

Mourinho scampered to his team bus, after gracelessly flicking an index finger at Preciado. Preciado, for his part, still incensed at the insinuation that his side had rolled over for Barcelona had bellowed at Karanka on the final whistle “I hope they beat you bastards five-nil”. How prescient.

In the lead-up to this week’s game, Mourinho tried a differently tack, seeking to downplay the rift at every opportunity. Speaking at a press conference on Thursday, he deflected suggestions that his relationship with Preciado would make this an extra spicy encounter. “No, this is a game just like every other. We turn up, we play, then we go home. It will be calm. But yes, it is a game just like any other game, and this means we must win”.

No chance. Real Madrid might have lacked Cristiano Ronaldo, Marcelo, Xabi Alonso and the resurgent Karim Benzema. Ozil scarcely resembled the impish schemer behind the side’s best work in recent weeks, and Angel Di Maria picked up where he left off on international duty against the US. But is this an excuse for the poverty of performance on display? Hardly. And besides, Gijón were missing as many of a dozen of their first-team selection.
And if it had to be Preciado and Sporting, then it had to be Miguel de las Cuevas to net the winner. A former Atlético Madrid man, albeit not one of much import. A talented attacking midfielder who used to turn out for the national team at underage level, but whose career has never really quite gotten off the ground. An underdog, in other words; an outsider. But one with a burning desire to put Goliath back in his place, and he did just that when he cut inside ten minutes from the end to beat Iker Casillas, leaving the Bernabéu stunned into silence.

Yes, maybe it was supposed to end like this. Mourinho has been telling the world what it already knows over the last month, that Real Madrid’s margin for error in this title race was zero. Five points they lay behind Barcelona, but that was really six; the 5-0 thrashing at the Camp Nou offering Barça an insuperable head-to-head advantage over the meringue. That meant that not only would Real have to beat Barcelona in their coming league encounter- which is at least some way feasible- but they would also have to rely on Barcelona losing another two games in the run-in. Along with winning every single one of their remaining games. Which was never really likely to happen, and now will not be happening.

Preciado ran onto to turf and punched the air, and who could blame him? This unexpected bounty of a result sees his side move a step closer to retaining their status in the top flight. He had had the balls to stand up to the special one’s mind games, throw the verbals back at him, and come up smelling of roses. He had done what more than 100 coaches had failed to do in the last eleven years- vanquish Mourinho on home turf in the league.

No more mind games, no more allegations, no more petty vindictiveness. Mourinho, who- for all his fits of pique (contrived or otherwise)- remains the supreme politician went straight to Sporting’s changing room to graciously congratulate his opponents, a gesture that had Preciado (never short on words anyway) effusive in his praise for his erstwhile bête noire.

Of course, attention will now switch to the Champions League where Real will host a Tottenham Hotspur side in stuttering form. And yet, there exists a suspicion that Real might fear the London outfit somewhat; or, at least, fear them more than they might have a few weeks back, where they had something resembling a fully-fit starting eleven. All those injury doubts, as mentioned above. In that press conference on Thursday, Mourinho had said that his medical department had told Ronaldo would be back for the game against Bilbao; ditto Marcelo, Alonso, and Benzema. Yet he then went onto say that he would decide- to overrule, should he wish- the final matter of who and who is not fit to start. And yes, that includes Cristiano Ronaldo. It would be a surprise if we do not see the forward return for this one. As for Mourinho’s mischievous claims that he might set his stall out for a 0-0; well, yes, this remains a possibility, and all the more so given the lack of fitness of so many key creative zones of the team. And yes, Tottenham did produce a shut-out of sorts against Milan in the last round. But, but, but… I wouldn’t bet your money on it staying scoreless.

On Friday, Italian state television station dropped the the bombshell that wasn’t quite a bombshell. In short, quote emerged from a piece- which Barcelona had requested remain strictly off the record- that Pep Guardiola had hinted of his impending desire to quit his at the Camp Nou. This was swiftly denied, but then RAI released the VT of their little walk and talk.

Apart from bringing on an intense pang of envy in seeing the man converse more articulately in Italian than this reporter can probably manage in his own native English, the most striking thing about the piece was that, while it was new, it sort of wasn’t new at all. Or, to be more clear; it was nothing, at least in general terms, that we hadn’t heard Pep Guardiola articulate elsewhere, on several occasions over the last 12 months. Rather, it was the degree, the tone of certainty, and the sense of resignation that he would be going sooner rather than later that stood out. But, here we have a young man, running a team playing the most intensive football on earth, who won it all at the first swipe, and will forever be weighed down the the immense pressure that his incredible success must inevitably bring. A man who no longer has that full head of cropped hair, which now includes some grey; above all, a man who has already gone on the record to say that the job puts him under immense strain.

On the field, Barcelona once again did the business. Villarreal, once again, gave them a right game of it. But in the end, the champions prevailed, smashing the ball home to all but guarantee that the league title will remain in Catalonia for a third successive season.

Apologies are in order for the rest of the league. Things have been happening outside of the big two, you know. Things like Roberto Soldado sticking four past his former employers Getafe to secure Valencia’s position in the final automatic Champions League berth. Thing like Bilbao cutting Almería adrift at the foot of the table despite the hosts taking the lead through Pablo Piatti on a Monday night encounter that finished 3-1 in favour of the Basque side. Things like Deportivo scoring more than once, and Hércules winning on the road for the first time since that shocker at the Camp Nou. Things like Sevilla’s meteoric rise up the table mirroring the abject collapse of Espanyol as the second half of the season progresses. Things like the temperature rising in a relegation battle that still leaves all of the final 10 teams in peril, and nobody- not even Almería- without a fighting chance. Things, in short, which we will have ample time to focus on over the next 8 matchday’s now that, once and for, the other league between the top two looks to have been firmly concluded, once and for all.