Title rivals MOL Fehérvár and Ferencváros played out an enthralling 1-1 draw in their first encounter of the season on Halloween night in Székesfehérvár.

Fixtures between MOL Fehérvár and Ferencváros have intensified in recent years given the competition of the two clubs for major honours; between them, they have claimed five of the last six domestic championships.

An interesting element to consider in this modern rivalry is that MOL Fehérvár represent a unique challenge to the capital city Budapest, where more than 90 Hungarian Nemzeti Bajnokság (NB1) titles have ended up. 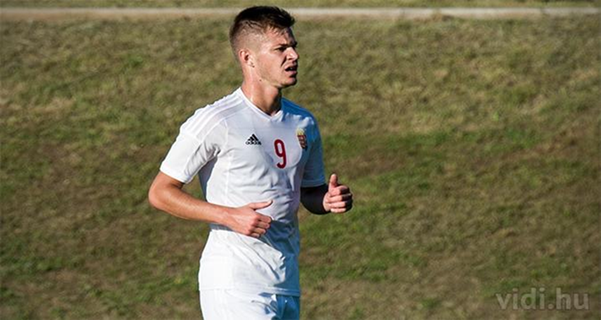 Fehérvár’s ambition to wrest supremacy away from Ferencváros can perhaps be derived from the roots of city. Székesfehérvár – translating to ‘white castle and throne’ – was built up by the first Hungarian king as the capital of the Hungarian kingdom.

The motive is clear for Fehérvár: a tricky task to establish themselves as the team to beat and bring the championship crown back to the white castle; it is a challenge worthy of a city which boasts a history of crowning kings.

Few players understand the nature of the uphill plight as intensely as Székesfehérvár native Krisztián Géresi. The winger has climbed a lurched ladder to recover from a nightmare injury which might have ended his career prematurely had he not been so determined.

‘I am not just a player of Fehérvár, I am a fan of Vidi’ 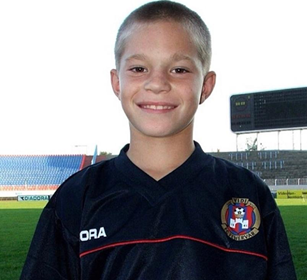 Joining the Vidi academy aged four, Géresi progressed through the system and acknowledges the traditions and history of the club.

We are reminded of the history and the club’s values; we have passionate fans that get crazy for success.

Fehérvár, recognised then as Videoton, made their mark on European football by reaching the UEFA Cup Final in 1984/85, beating Manchester United and Paris Saint-Germain en route but ultimately losing 3-1 on aggregate to Real Madrid. 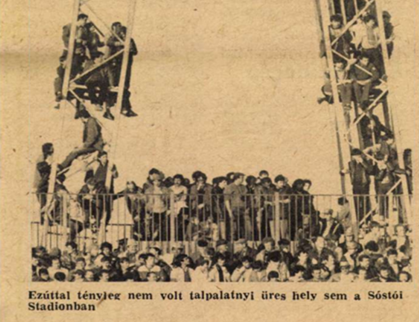 ‘No room at the Sostoi stadium’: Image courtesy of MOLFehérvárfc.hu

Determined fans found any way possible to witness the UEFA Cup final as Real Madrid visited Székesfehérvár in the first leg. Los Blancos claimed a 3-0 win, and despite a spirited Vidi winning 1-0 at the Bernabéu, the Spanish giants triumphed on aggregate. 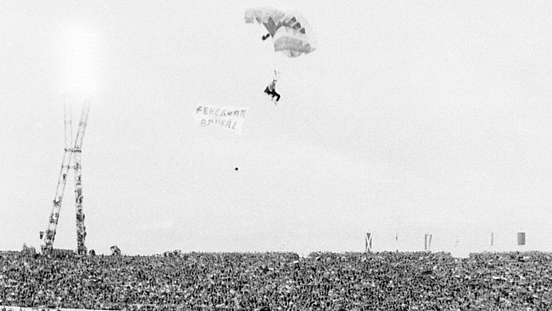 Members of that ‘84/’85 team coached us as we moved through the ranks, they would teach us that with the right attitude you can beat the big teams.

Krisztián racked up 26 goals in 67 academy games from midfield, earning him a call-up to the first team and national U21 side in 2016.

Reflecting on the opportunity to represent his country at age-grade level, Geresi added:

When making my debut I was inspired by [Manchester United forward Marcus] Rashford and the start he made. Today, I admire what he does on and off the pitch.

Dazzling for the academy and impressing for the first team, interests were piqued abroad as Géresi’s career was building traction, meaning a call up to the national side was the natural progression.

In devastating contrast, the next chapter for Géresi would instead follow a script wreathed in mystery and misfortune – a chronic spine problem had been intensifying for Krisztián in the winter months of 2017.

The pain started to grow; I was missing more games and when I did play it was with physical and mental stress.

A brace of assists and a goal against Debrecen was achieved ‘through pure adrenaline’, but in a top of the table clash against title rivals Ferencváros, Krisztián was substituted after 52 minutes. It would be 1023 days before he would next start a game for Fehérvár.

‘The pain with no name’

When I was replaced against Ferencváros, my waist hurt, but the truth is it had been far from perfect   for a long time; months of physiotherapy and professional observation ensued but proved futile.

All of the specialists had the same opinion, build up the lower back and the pain will go away. It would not go away, I felt there was something they just could not find.

Krisztián’s contribution up to the point of injury was, however, enough to earn him a league winner’s medal that season. 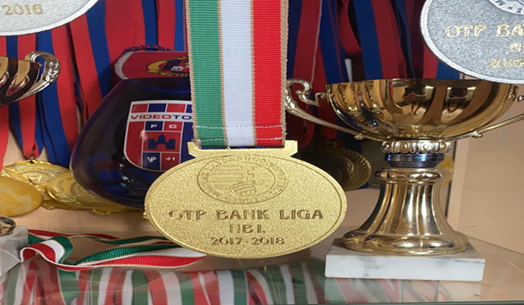 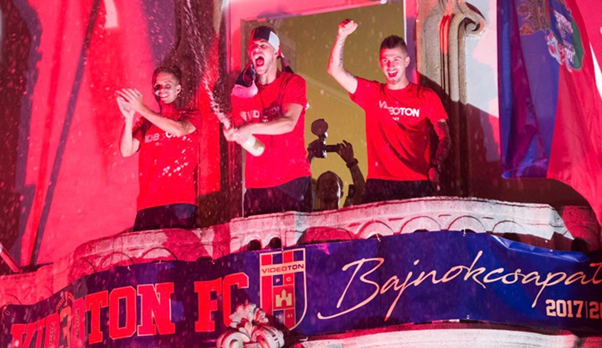 The lack of treatment and diagnosis meant Krisztián was forced to miss the whole 2018/19 season.

When Krisztián was asked which single game he would most like to have played in, one fixture quickly springs to mind: ‘the Chelsea game’.

Fehérvár, that season recognised as MOL Vidi FC, reached the Europa League group stage in that campaign and entered the final round of fixtures needing to better BATE Borisov’s result to progress to the knockout phase. Their opponents, a cerebral ‘Sarri-ball’ Chelsea side, had edged a 1-0 win in the reverse fixture at Stamford Bridge.

It was hard for me to watch while my brothers fought on the pitch together, I am competitive. I want to help them and play.

The game ended in a 2-2 stalemate, which left Fehérvár two points adrift of BATE, who would go on to play against Arsenal in the next round. 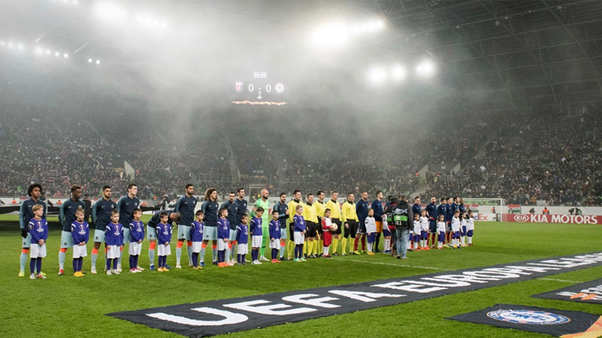 ‘The fans were electric that night’

Injuries can be a cause of despondency for athletes. Clouds of uncertainty gather and form frustration and doubt, confidence drains. Arsène Wenger once said of confidence ‘you go up by stairs and down by lift’. For Krisztián, during this time, the lift was not moving.

The hardest part was the uncertainty. I never knew if I would be on the pitch again.

Words of reassurance from Ferenc Csongrádi proved valuable. Nicknamed ‘The Emperor’, the Fehérvár legend captained the side to their UEFA Cup final despite also suffering from a spinal injury in his early twenties. After 18 months Krisztián at long last received a diagnosis from Dr Áron Lazáry.

The problem was caused by micromovements between my two vertebrae, my disc in my spine between L5-S1 vertebra was ruined.

The solution would be spine surgery. 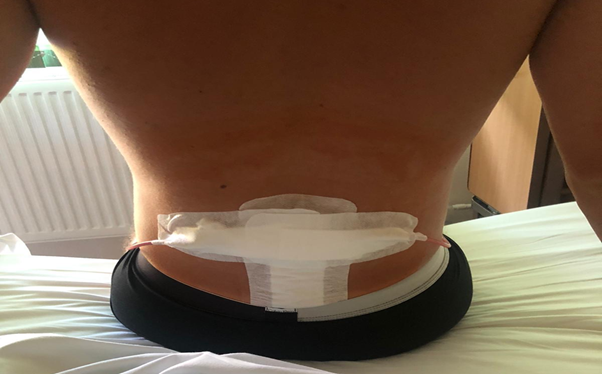 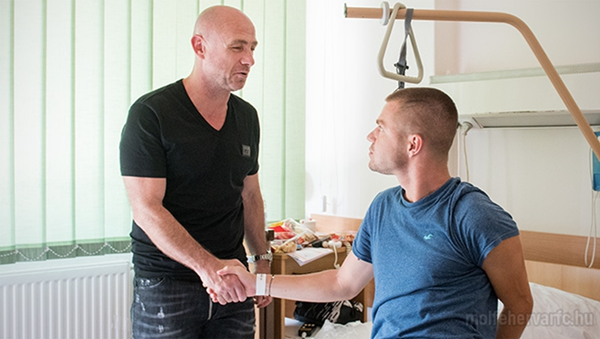 Géresi went through with the operation to remove the disc and two vertebras; the surgery was successful and Krisztián entered a recovery period of four months. But with a focus on the spine operation and rehabilitation training, another problem, undetected, began to simmer. Barely a blink back into training, Krisztián faced a further setback.

Something was wrong. I had a sharp pain in my groin. I couldn’t believe the doctors could tell me nothing, I was upset and angry, another pain with no diagnosis. This was the hardest moment, I felt like I was in a hole.

‘My girlfriend helped me remain positive’

Suffering a new injury so soon after recovering from an 18-month absence was further compounded by further lack of clarity. Faith and persistence were rewarded when national team physio Fehér József organised sessions with a specialist in Germany.

The groin hernia was discovered and in fact had been developing since March, but remained undiagnosed because of the spinal injury. With the correct diagnosis, Krisztián was scheduled for surgery in January. The operation in Germany was completed successfully. 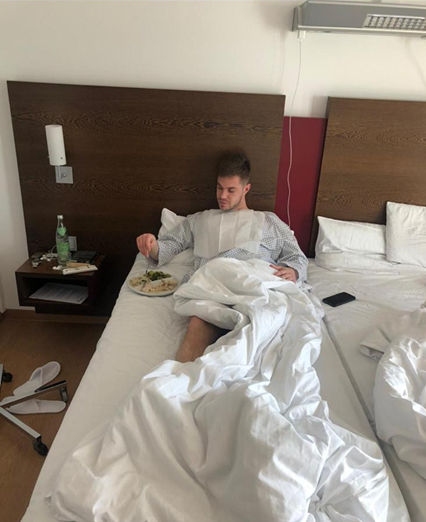 Krisztián, who stayed in Dorfen for two months to undergo rehabilitation training with József, admitted:

Every day was hard, my father was the person who believed in the healing more than me, he brought me to the specialist even if I didn’t want to go. 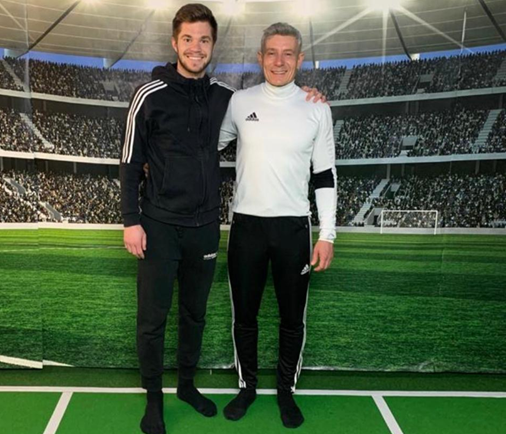 Géresi and József during rehabilitation training: Image courtesy of Géresi

In May 2020, after 30 months, eight physiotherapists and two operations, Krisztián was declared fully fit for senior training. The clouds had parted, and the grass was still green.

When I realised I was completely healthy I felt reborn. I sent messages to everybody when I came home, it was unbelievable. I cannot forget that feeling.

Krisztián made his first official appearance as a substitute in the Europa League qualifier, scoring a penalty in their shootout win over Bohemians. This was followed by a first official start in more than 1000 days, an outing in the Magyar Kupa (the Hungarian national cup), a game in which he bagged an assist and fired a 20-yard snapshot into the roof of the net.

The climb back fuelled an unshakable self-belief, and equipped him with staunch ferocity.

Mentally, I am stronger than ever.

When asked about his career ambitions, Krisztián identified short- and long-term goals:

I want to rediscover my form and play as many games as possible, I also want to realise my targets of winning titles and playing in European competition.

Above all, I want to enjoy every single moment on the pitch.

As for this season, Fehérvár look to satiate their ambition by winning the league and reclaiming the Magyar Kupa they surrendered last season, having lifted it in 2018/19.

Fehérvár can only boast two Magyar Kupa triumphs but Géresi underlined the importance of adding a third:

It is a very important competition for us, we hope to keep adding trophies. 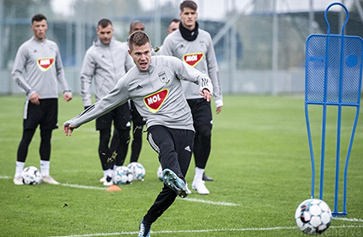 For Krisztián, the Magyar Kupa offered him a platform to showcase his recovery at a competitive level.

Krisztián hopes to play an important role this season and most recently contributed a brace of assists, including a pass when with the same touch he controlled a crossfield ball and deftly steered it into the path of team-mate and Hungarian international Nemanja Nikolic.

On words of encouragement to those suffering through long-term injury, Krisztián said:

You have to find motivation in yourself. Ultimately you are the one going through the process, it is important to surround yourself with people that have a positive influence on you.

Krisztián’s journey highlights the importance of perseverance and self-belief in overcoming obstacles; the ball is now at Krisztián’s agile feet as he strives to reach his potential. Historic cause for optimism can be found in the path trod by aforementioned ‘Emperor’ Csongrádi.

Fehérvár and Ferencváros will look to dominate the next decade of Hungarian football. Ferencváros, with their colossal stature, will not relinquish titles lightly. On the other hand, Fehérvár have not finished outside the top two since 2013/14 and do not feel belittled by any inferiority complex.

Success is very important to the city of Székesfehérvár, maybe it is something deep in the people, passed down generations.”

Fehérvár have not claimed a title since Krisztián’s injury; perhaps a return to fitness and form could swing the pendulum of momentum for his lifelong, hometown club.

All images labelled ‘courtesy of Fehérvárfc.hu’ are intellectual property of MOL Fehérvár.