Ah, the new season. It’s intoxicating isn’t it? The Christmas-morning excitement of the Saturday morning alarm, the surge of optimism on the way to the match knowing everyone’s starting with a blank slate, the joy of seeing your new striker run onto the pitch in the sacred shirt.

Every team opens the new campaign afresh, with equal points, the glories and disappointments of last year consigned to the records books. Theoretically at least, there’s a hope that this year could be your year.

How much justification, though, is the delirious excitement that usually greets the kick-off to the Premier League season? Just how much chance is there that your side could be the one really making waves this time around?

Statistically speaking, we can judge just how optimistic every supporter should feel ahead of the 2013-14 campaign. And it doesn’t make for comforting reading for most sides.

By looking at the finishing position the following season for each place in the Premier League, there are some pretty strong statistical guidelines that can make strong rules of thumb for any fan hoping for a jump (or dreading a dip) in performance this year. 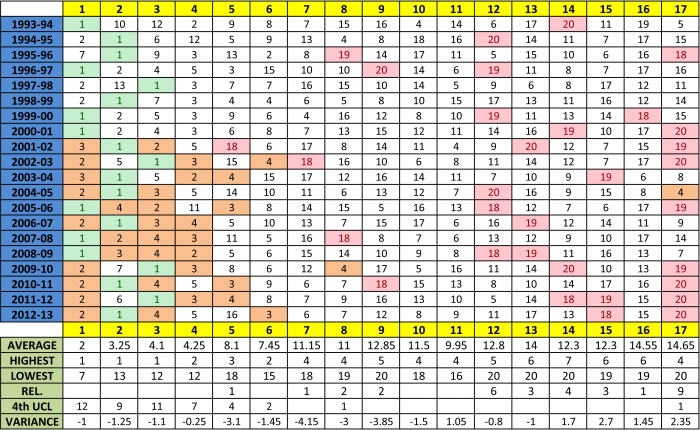 The table above shows where each position finished the following year by season – champions are coloured green, Champions League qualifiers in orange and relegated sides in red.

The first thing you can see is if you didn’t finish in the top three last year, you can forget about winning the title. Since the first Premier League season in 1992-93 (a BC / AD watershed moment for almost all sporting statistics), no team who finished outside the top three has gone on to win the league the following season. In fact, on only four occasions has the third placed side lifted the Premier League trophy at the next attempt.

Another fairly quick and obvious conclusion to draw is that if you finished in 17th last year, you’re in trouble this time round. Now, you probably don’t need a table of figures to tell you that, but of the 18 seasons since the Premier League was reduced to 20 teams, the 17th placed-side the season before were relegated nine times and finished bottom on five occasions.  So, Sunderland fans, there’s a 50% chance you’re going down this year. Sorry.

As for the elusive fourth place and Champions League football, Man Utd supporters needn’t worry. Only once has the champion dropped further than third the following season (Blackburn in 1995-96, which was something of a unique circumstance). This of course means that since four Champions League places were awarded to English clubs for the season (UCL season 02-03, awarded from league standings in 01-02), every title holder has qualified the following season too. Having said that, the Moyes factor presents a fairly unique circumstance of its own.

It’s pretty good news for Man City and Chelsea too, although intriguingly it’s statistically better for your next campaign to finish third than second. 75% of second-placed teams end up in the top four, while 92% of sides who finish third made the Champions League the next season. Arsenal, meanwhile, have a 58% chance of ending up at Europe’s top table next year according to the historical data.

If you’re hoping to make the Champions League from outside of the top four, though, it’s looking pretty grim. Since 4th place offered a Champions League place and therefore started to matter in 2001-02, only four teams have managed to go break into that top four from beyond fifth: twice from 6th (Chelsea in 02-03 and 12-13) once from 8th (Spurs in 09-10) and once incredibly from 17th – Everton’s meteoric rise from almost-disaster to the Champions League in 2004-05.

The most interesting data to be gleaned from past tables is not to do with looking up, but looking down. Relegation, of course, is not something which many fans will be thinking of ahead of the first match of the season, but many will be looking over their shoulders before too long.

As mentioned before, 17th is not a good place to finish the previous campaign, but 16th is. Only once in a 20-team Premier League has the side who finished two from the drop the previous season gone down the next – Wimbledon in 99-00. In fact, statistically speaking it’s better to finish 16th than 15th, 14th, 13th or 12th, the places which account for 16 relegation spots in the 20 completed seasons post 1992-93.

If you’re a West Ham or Norwich fan, you could also breathe a little easier. 10th and 11th have never been sent down the following year, but 7th, 8th and 9th have.

Promoted sides are long associated with going straight back down, but it’s not always as cut and dried as that. Of the 62 teams promoted into the Premier League, 28, or 45%, have gone straight back down in the same season. Quite a lot, admittedly, but considering the dangers of finishing 17th it could be worse. Not  only that, but only twice have all three promoted sides been relegated in the same season and twice all three have avoided the drop. On average 1.33 promoted teams go down that season, so if one of your fellow Championship escapees is looking doomed, odds are you’ll survive.

So, why might some of these statistical anomalies be true? Well, dropping from 2nd to outside the top four seems to be fairly easy to explain. Twice of the three times it’s happened since 02-03 have been Liverpool, when the year they finished 2nd was the culmination of a manager’s work and the pinnacle of the side they built (Houllier in 02-03 and Benitez in 08-09). After these seasons, the following year produced disappointing results – eventually the teams fell apart and the managers left.

The other occasion was Chelsea in 2011-12 – their Champions League winning season. As with many years at Stamford Bridge, this was a turbulent one, with mediocre league form leading to AVB’s sacking and magical European nights proving to be the exception rather than the rule. And who could blame the players for expending more of their energy on winning the one big prize that had eluded them?

The 16th place conundrum seems to be a little harder to argue away. Maybe it’s the sweet spot between having just enough of a scare to compete harder the next season and having a squad strong enough to compete in the league?

Finally, the big question – who’s in for the most exciting season? Which teams are likely to produce a result most different to last year? Well, based on the numbers it’s Tottenham, West Brom and Swansea. Looking at the average finishing place for each spot and the variance on the previous season’s standings, it’s only 5th, 8th and 9th who have a change of three spots or more based on their previous position. Unfortunately for those teams, all three are drops.

Of course past performance isn’t ironclad proof of future failure or success, so we can’t read too decisively into these figures.

Just don’t get your hopes up too much.

One thought on “Just how optimistic should Premier League fans be about the new season?”