It has been a rather pleasant week for American soccer supporters. Pitches are no longer caked in snow, labor relations did not go nuclear and heck it looks we might even have a chance to watch a soccer match in Cuba! 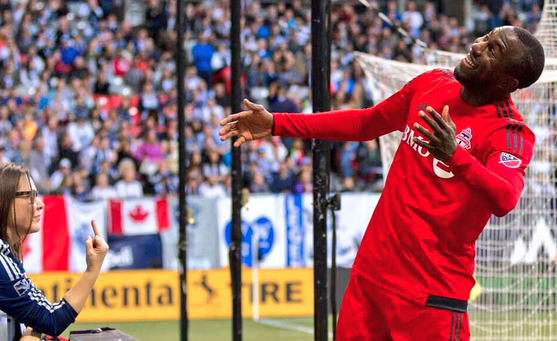 While all of these things are pleasant sights for even the most sardonic supporter, perhaps there was no better piece of news than what came from north of the border: Jozy Altidore scored a brace for Toronto FC!

It was a bit of peculiar news considering the circumstances. Altidore, considered to be one of the key pieces for the U.S. Men’s National Team, scored two goals for Toronto F.C, a team from Canada. His first goal was set up in part by Michael Bradley, another starter for the USMNT.

Furthermore, unless one lives near the Canadian border, has an MLS Live account, or is handy with Google searching for a stream of the match (not that we would promote that method here at BackpageFootball – Editor) it was largely not available in the United States.

But if there is a particular moment that captured the first weekend of Major League Soccer perfectly it was that of Altidore scoring twice to lift Toronto FC over the Vancouver Whitecaps 3-1. Beyond just the act of scoring it was the way that he scored his first goal – finding a pass in open space, using his size and strength to get a good position on the defender and firing a bullet past Whitecaps goalkeeper David Ousted.

While USMNT coach Jurgen Klinsmann has repeatedly stated in public his desire for American players to challenge for spots at top clubs around the world, one has to wonder if he meant Canada. While it seems doubtful, playing north of the border could be a huge benefit to both Altidore and the USMNT as they prepare for the 2015 Gold Cup and for qualification for the 2018 World Cup.

It is interesting how one simple goal – or in Altidore’s case, goals – can change the attitude of a striker. It is a position that is so based on a player’s emotions, on confidence, that it can often override any physical advantages. Misses on shots from point-blank range can extinguish confidence that had been built up for years. It is an unfortunate aspect of one of the most critical positions on the pitch.

Over the past two years, there have been very few players who could have been labeled as more of a bust in international football than Altidore.

After having a strong campaign with AZ Alkmaar in the Dutch Eredivisie (51 goals over two seasons) and some good moments with the USMNT (goal against Spain in the FIFA Confederations Cup, 25 goals overall before the age 25,) Altidore signed with Sunderland in 2013 on a $13 million transfer fee.

Coming in at a time when the English Premier League’s coverage was expanding in the United States, it was expected that Altidore would be essentially the face of US Soccer in the league.

Yet he was never able to live up the hype with the ‘Black Cats’. Although the club did switch managers during his tenure (a death sentence for many players who fail to produce) Altidore would score just one goal during his time at the Stadium of Light. He was shipped off this winter to Toronto FC in exchange for another striker who had big dreams but fell short – Jermain Defoe.

While the Altidore situation seems to fit the narrative of so many over-hyped American players who go to Europe, fall short, and come back to MLS; this situation is a bit different.

Firstly, Altidore isn’t going to back to the United States, he is going to Canada. Whilst the two countries share a league and, for the most part, a club system, Canadian soccer is fundamentally a different organization. He will not be treated like the return of the prodigal son in Toronto, much like Clint Dempsey was when he joined Seattle. He will be just another good player.

Going to Toronto gives Altidore a chance to rebuild his confidence. His failure at Sunderland, coupled with the failure at previous stops with Villarreal, Hull City, and Bursaspor painted a very poor picture of his abilities. This is still a guy who is just 25-years-old clearly was given responsibilities that he was not ready for at such a young age.

That being said, what makes Toronto such a good environment for him is that they will not treat him with kid gloves. This is a team that consistently posts some of the league’s top attendance marks, yet has never made the playoffs in their ten year existence.

Yet they all failed for one reason or another. There are expectations with Altidore in Toronto and supporters will not care that he is a member of the USMNT.

This unique set of circumstances that Altidore finds himself in can only benefit the player in the long-term. Having the chance to play in a league that matches his skills and with a midfielder in Bradley that he knows well gives him the chance to find his scoring touch.

Altidore has the opportunity to reset his career but nothing will be given to him in Toronto. For a 25-year-old entering the second phase of his career and with greater expectations with the USMNT forthcoming in 2018 that might just be what he needs.

3 thoughts on “Why Jozy Altidore 2.0 is good for US soccer”