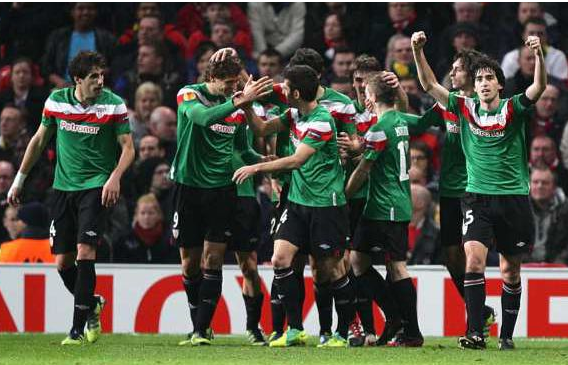 Since Michel Platini’s moderate modifications to the Champions League format, affording teams from mid-ranking nations an easier route into the group stages, subtle changes have transpired at European football’s top table. Six different countries were represented in the 2010 quarter-finals; five last year; and now seven. Spain is the only country with two representatives in the final eight.

But while the Europa League’s big brother has had an unusually egalitarian feel this year – aided heartily by APOEL’s plucky run through the group stages and beyond – the smaller sibling in the UEFA club competition family has taken on a more conformist feel as it reaches its final stages.

German and Spanish teams occupied more than half of the quarter-final places, along with one each from Ukraine, Holland and Portugal. In fact, La Liga’s Atletico Madrid and Valencia could potentially meet in one semi and cup specialists Athletic Bilbao, in other half of the draw, have one foot in the other. Spanish teams have certainly been ascendant in this season’s European club competitions; surely proving to the sceptics that there is more to the Primera División than Barca and Real.

The ‘third force’ in Spain are, incidentally, the only side this year to have parachuted in from the Champions League and survived the first two knockout rounds in the continent’s secondary competition – five such ‘dropouts’ reached the same stage last season. Valencia’s Dutch quarter-final opponents, AZ, managed to set up an intriguing return at Mestalla, by snaring a 2-1 home win in Alkmaar.

The Eredivisie title-chasers took advantage of the visitors’ drastically sliding form (which threatens to derail their now-traditional passage into the Champions League) and their particular weakness on the road, to grab a valuable late winner from Maarten Martens; orchestrated by Aussie winger Brett Holman’s determined charge to the byline and pinpoint cross.

Holman clearly has designs on signing off his successful spell in the Netherlands with some silverware before he departs for pastures new, at Villa Park, this summer. It was the 28-year-old’s deliciously-finished opener that set Gertjan Verbeek’s men on their way in a competitive first half – a perfectly-placed side-foot volley beat Diego Alves all ends up. Valencia’s Mehmet Topal, a star performer in the Europa League this year (just ask Stoke), split the goals with a close-range header to leave the tie tantalisingly poised.

When the sides reconvene in Andalucia, AZ’s talented young Costa Rican ‘keeper, Esteban Alvarado, will need to be in fine form again if he is to repel the likes of Jonas, Pablo, and Roberto Soldado on home turf, where they feel infinitely more comfortable. The Dutch side have relied heavily on their tremendous home form (nine EL games unbeaten at home) to progress so far, and even with a slender advantage in place, their toughest task now awaits.

To say that the Bundesliga’s form side Schalke  face a tough task as they head to San Mames would be an understatement of epic proportions, however. A helter-skelter first leg with much-fancied Athletic Bilbao at a tightly-packed Veltins Arena (first-rate atmosphere; fourth-rate pitch) produced an abundance of goals and plenty of shoddy defending.

The success story of the competition so far, Athletic were visibly discomfited by the quality of the playing surface, which made even the notoriously lumpy turf at San Siro look like Centre Court on the first day of Wimbledon by comparison. They had evidently been shaken, too, by their disastrous recent domestic form.

Nonetheless, they took the lead against the run of play, through the totemic Fernando Llorente. Almost instantaneously, Raul or “that b*stard that just keeps scoring” as Llorente affectionately later referred to his compatriot, netted an equaliser. He chose not to celebrate ostentatiously; instead heading straight for the centre circle, then berating left-back Christian Fuchs for his sloppiness in the concession of Llorente’s opener. The fire still burns bright in the UEFA-competition record goalscorer, even in the dying embers of a long, illustrious continental career. Schalke hope to persuade the one-time galactico to sign on for one more year in the coming weeks, but the indefatigable 34-year-old would prefer two.

As the game wore on, Athletic’s prowess on the counter served to expose Schalke’s over-reliance on a callow central-defensive partnership of 20-year-olds Joel Matip and Kyriakos Papadoplous, and the overworked defensive-midfield dynamo Jermaine Jones, to cover for the adventurous full-backs, Fuchs and Atsuto Uchida. Winger Jefferson Farfan was, predictably, about as useful as a chocolate chimney in covering the gaps and wunderkind Julian Draxler was similarly overrun before being substituted early in the second half.

A second strike from Raul only papered over the cracks for Schalke, as Athletic struck incisively three more times in the final 17 minutes, to leave the Gelsenkirchen club an almost insurmountable mountain to climb in the Basque country. Iker Muniain’s killer fourth sent wild-eyed Marcelo Bielsa wild with delight, as the seal was surely set on a safe passage to the final four. As hopes of qualifying for Europe through league placing recede with alarming alacrity, both Llorente and Muniain were (partly) rested at Camp Nou on Saturday night. The Europa League is now absolutely Bielsa’s top priority.

Over at Atletico Madrid, his fellow Argentine, Diego Simeone, still has designs on a Champions League spot. Though miles apart in style and footballing philosophy, both men have succeeded in rapidly imprinting their unique personalities upon their respective clubs. Under their granite-jawed ex-captain, Atletico’s results have improved exponentially, and Los Colchoneros are now a considerably more dogged unit, built in their manager’s image.

Atleti take a 2-1 lead to Hannover, thanks only to a late winner at Vicente Calderon by Eduardo Salvio, a member of their Europa League-winning side in 2010 and a star of Benfica’s run to the semis last year. In true Simeone style, they collectively meted out a fair share of rough, often spiteful, treatment to Hannover’s star turn, ex-Man United man, Mame Biram Diouf. Diouf’s away goal gives Mirko Slomka’s side significant hope for the home leg, and was gratefully received after Europa League-specialist Radamel Falcao had netted an early header to re-affirm his under-appreciated aerial prowess.

Under-the-radar they may be, but Hannover have become an established member of the Bundesliga’s upper echelons (currently 5th and well poised for EL re-entry next year.) Another former United employee, Ron-Robert Zieler is just one of a current crop of talented young German goalkeepers; experienced fullback Christian Pander (once of Schalke) has the sweetest of left feet; and balding ex-Bayern schemer Jan Schlaudraff provides the creative spark. Despite some mixed recent form, Die Roten should harbour strong hopes of upsetting the Iberian apple-cart on Thursday night.

The final member of the clan from the peninsula, Sporting Lisbon, face a tricky trip to the lavishly-bankrolled Metalist, of Ukraine’s second city, Kharkiv. A stoppage-time goal, courtesy of a softly-awarded penalty, put a whole different complexion on Metalist’s visit to northern Portugal last week. Having trailed to a close-range poach from Marat Izmailov and a long-range piledriver by Emiliano Insua, the visitors laid siege to the Sporting goal in the second half and belatedly got their reward, albeit in dubious circumstances.

Sporting, who replaced Domingos Paciencia in February (EL runner-up with Braga last year) with club legend Ricardo Sa Pinto, amid rumours Domingos had one eye on the Porto job, are somewhat resurgent following their unlikely defeat of Europe’s richest club in the last 16. They’ve won just one of their last nine European away games, however. Though a draw will do, Sa Pinto plans to send his team out to with a positive mindset: “A goalless draw is not what we want to achieve here,” said the new coach. “Our goals are to score and to win.”

Despite their chilly eastern European destination, they’ll find themselves up against even more fleet-footed South American talent than when they tackle their Latin-tinged rivals Benfica. Metalist’s samba-style high-pressing, quick passing style has caught the eye throughout the competition, but hopes of a first-ever European semi-final for the competition’s top-scorers (with 26) are hampered by untimely suspensions to first-choice centre-backs Papa Gueye and Marco Torsiglieri, as well as captain Cleiton Xavier.

Like the ultimate destination of the Coupe UEFA, it’s a tie that’s almost too close to call. However, only a brave or foolish man would bet against a Spanish triumph in Bucharest come May 9th.