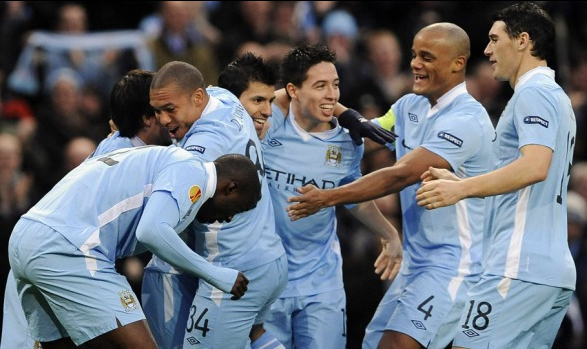 Following its brief mid-winter hibernation period, the UEFA Europa League burst back into life last week amid an array of big clubs and appetising ties. It was almost as if the terminally tedious qualifying and group stages had never taken place at all. All thoughts of interminable mid-July jaunts to Azerbaijan were cast aside, as a light sprinkling of the continent’s grandest names served to spice up the Thursday night mix.

Baby-faced teenage forward Iker Muniain, whose rave reviews this season demonstrate that the frankly silly tag of “the Basque Messi” weighs far from heavy around his slender shoulders, gave the visitors a deserved lead to take into the interval. However, the Railwaymen shook off their winter-break ring-rust to hit back strongly in the second half.

Denis Glushakov equalised from the penalty spot after Jon Aurtenetxe brought down Felipe Caicedo and ten minutes later they were ahead; Caicedo capitalising after Fernando Amorebieta failed to clear Renat Yanbaev’s left-wing cross.

Muniain later conceded that Athletic had allowed the initiative to slip from their grasp: “In the second half we lost some of the fluidity we had in the first 45.” He added: “Lokomotiv were excellent on the counter attack.”

The diminutive starlet has a £25m buy-out clause in a contract which runs until 2015. Athletic are naturally intent on retaining the Spain Under-21 international, who starred as the ‘baby brother’ of fellow stars-in-the-making Juan Mata, Thiago Alcantara and Javi Martínez in Spain’s 2011 European Championship-winning side. But, of course, the vultures are circling already.

Former coach Joaquin Caparrós first deployed Muniain from an advanced position on the left, before gradually dropping him deeper to initiate attacks. Now, under the guidance of that most marvellous maverick, Marcelo Bielsa, Muniain frequently revels in a central role; given license to roam between the lines. The 18-year-old darling of the adoring masses at ‘La Catedral’ will be pivotal in Athletic’s attempts to turn the tie around – having thumped Mirandes to reach an enticing Copa del Rey final with Barcelona, then seen off big bucks Malaga on their return from Russia, domestic matters are well in hand for Los Leones.

Bielsa adheres to Arrigo Sacchi’s principle that, ideally, there should be only 25 yards between centre-forward and centre-back and his Athletic press high and hard; using width and Muniain’s magic to service much-coveted target-man Fernando Llorente.

They will need to keep the back door bolted, however, when welcoming Jose Couceiro’s Lokomotiv, who dutifully chugged into the Championship Group of the transitional Russian Premier League season and added Roman Pavlyuchenko to their ranks during the short off-season. Fellow ex-EPL forwards Caicedo and Victor Obinna (both with a little Liga experience too) also feature alongside established Russian internationals past and present; Torbinski, Loskov and Sychev. And Athletic beware: Loko are at their most dangerous after the break; 13 of their 16 goals since the start of the Europa League group stage have come after the interval, seven of them after the hour mark. A vital away goal at this time on Thursday night could break Basque hearts and seal a trip to the Theatre of Dreams.

PAOK heartily enjoyed their own English foray before Christmas; effectively turfing out Tottenham at White Lane with some enterprising counter-attacking football, despite being down to ten men for most of their penultimate group match. Versatile forward Dimitris Salpingidis scored the opener in that game and will provide the chief threat to Udinese’s highly-regarded centre-back pairing of Danilo and Mehdi Benatia; as the tireless Greek international’s healthy tally of 28 career goals in European competition (at a rate of a goal every three games) exhibits.

PAOK coach László Bölöni replaced current Udinese don Francesco Guidolin as Monaco coach back in 2006, but lasted barely three months in the job. The globe-trotting veteran has survived eight months so far at Stadio Toumbas, the sometime white-hot ambience at which Gazzetta dello Sport once likened to the nine circles of hell featured in Dante’s ‘Inferno’, after a tie with Maradona’s Napoli in the late ‘80s.

Despite holding his opposite number to a goalless draw at the Friuli, where Almen Abdi struck the post for the hosts in what was otherwise a damp squib of a game, Boloni will be acutely aware that the unstoppable Toto Di Natale could yet be passed fit to play a part in Thessaloniki, if the toe he fractured in le Zebrette’s agonising late defeat to Milan heals sufficiently. If not, Antonio Floro Flores is a far less fearsome attacking spearhead. Greater goal-getting responsibility will, therefore, fall upon the shoulders of the tricky Abdi and Kwadwo Asamoah, recently returned from African Nations Cup duty – the Ghanaian playmaker too rarely uses his wand of a left foot to find the back of the net though.

Counter-attacking is their forte and Dusan Basta and Pablo Armero provide perpetual motion on the Udinese flanks, but without Di Natale in full flight – and the dynamism of versatile Chilean Mauricio Isla (out for the season) – the bianconeri could again struggle to breach a disciplined PAOK defence.

The winners of this tie will take on either erstwhile Eredivisie leaders AZ or Anderlecht, top in neighbouring Belgium. Anderlecht have a positive historical record against Dutch opponents and will still fancy their chances of progressing, in spite of a 0-1 deficit from the first leg in Alkmaar, given their six wins from six in the group stage. Expect goals at the Constant Vanden Stock too: the hosts’ four European home games this season have produced 14 goals.

Belgian fans will be well catered for this week, as both Standard Liege and Club Brugge will host Wisla Krakow and Hannover respectively. Standard will favourites to progress, as they have an away goal in hand, but Brugge certainly have their hands full with in-form Bundesliga hotshots Hannover; trailing 1-2 from the first leg in Germany. The winners of these two ties will meet each other at the next stage.

The remaining ties fall into three distinct categories, now that Manchester City have confirmed their status as warm favourites for the title by summarily dispatching defending champs Porto. Along with United, Metalist, whose substantial band of South American whizzkids set about Salzburg with great venom, comprise the “good as through” classification.

Grouped under “writing’s on the wall” are the ties between Braga and Besiktas (first leg: 0-2); Lazio and Atletico Madrid (1-3); Trabzonspor, conquerors of Inter in their Champions League incarnation, and PSV (1-2); and Stoke City’s sojourn to sunny Valencia, as the unheralded Potters trail to Mehmet Topal’s blistering first leg strike at the Britannia. Tony Pulis’ charges can only hope that Los Che are still riddled with shellshock following their ruthless shellacking at the hands of the scintillating Cesc & Messi show last Sunday.

Twente v Steaua Bucharest (1-0); Olympiacos v Rubin (also 1-0); Sporting v Legia (2-2); and Schalke v Plzen (1-1) remain a little more in the balance, it seems. However, the home side will start as favourites in each case. Providing too many big boys don’t fall by the wayside, the last 16 is, potentially, stronger than any since the halcyon days of the pre-Champions League UEFA Cup.