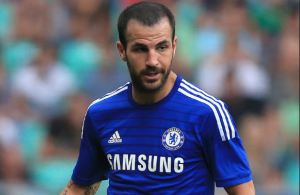 While Chelsea’s strikers made all the headlines last year, for all the wrong reasons, it was the arrival of a new striker that created the biggest stir during the summer.

The general sentiment surround the star-studded Chelsea side was that a decent striker would result in trophies. Mourinho, while never conceding it publicly, clearly agreed.It would be nothing short of impossible for a man of his footballing intelligence to sit through another season watching the misfiring Fernando Torres, the square-peg-in-a-round-hole Demba Ba and the withering Samuel Eto’o.

The Portuguese manager acted fast and spent £32 million on Atletico Madrid sensation Diego Costa during the summer, but it was another signing that seems to have added another dimension to the side which includes balance, attacking edge and intellect. It was evident against Burnley and one can expect Fabregas’ role to expand over time into a leader on the field in the mould of Jose Mourinho himself.

Cesc Fabregas spent a large amount of his time positioned just in front of Nemanja Matic, as the two men occupied the double pivot role. He was never really far enough away to leave the very capable Matic isolated, but was nudged forward enough to pull all the strings in the Chelsea midfield.

With Ivanovic and Azpilicueta adding width and pushing into the opponents’ half, it allowed Andre Schurrle and Eden Hazard the chance to cut inside, as an option over the top or for a threaded through ball, while Diego Costa dropped deeper to receive passes with his back to goal that were then distributed diagonally to the oncoming Schürrle and Hazard or back to Fabregas, who had his head up and was always looking for the killer pass. Fabregas’ time at Barcelona and their metronomic like passing has clearly improved the Spanish midfielder’s game, a game that was already more than competent in several areas.

Mourinho’s intelligence as a coach is perfectly mirrored in Cesc Fabregas on the field and now he has his man in the team who will dominate, dictate, and take the measured risks that Mourinho likes to see. Players like Hazard, Lampard, and Ramires all have their own innate qualities but with individual brilliance comes reckless abandon, and with endless trotting up and down the field comes a lack of awareness. Fabregas has the perfect blend needed to occupy this dictatorial role, while keeping his game compact and making sure that Chelsea are in control at all times, or when Mourinho sees fit.

It will take time for players like Hazard and Oscar to learn how to play alongside Cesc and become aware as to how he runs the show, but Monday night’s game has already showed that André Schürrle has already began to benefit from the former Barcelona man’s style.

Hazard and Oscar can win games on their own and the signing of Fabregas does not render them redundant, but with the balance now in the squad and the more solid base of defense, the two attacking midfielders might be seen as a luxury for Jose Mourinho. It sounds strange to mention Hazard in the same sentence as the word redundant, and he quite possibly never will be, but as Fabregas’ influence increases, he will certainly be more reliant than ever on his two or three moments of brilliance per game to shine compared to Fabregas’ influence over the course of 90 minutes.

In saying that, when comparing most midfielders’ overall games to Fabregas, many will fall short.