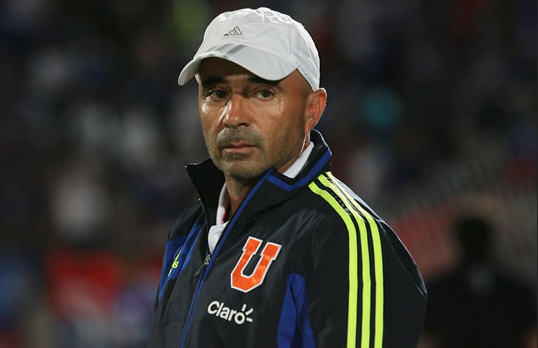 Jorge Sampaoli last night took charge of his 100th game at the helm of Universidad de Chile when “La U” took on O’Higgins in the first leg of the 2012 Apertura final this week.

Despite the 2-1 defeat, Sampaoli’s superb side have dominated the Chilean scene of late, winning both the Apertura and Clausura tournaments in 2011, as well as the club’s first international triumph, the Copa Sudamericana. Sampaoli like Bielsa and Guardiola is a football progressive, prising retention of the ball and possession as the best method of winning football matches.

He started his managerial career coaching Newells’ youth teams. In 2002 he got his first break to coach a first division club managing Peruvian team Juan Aurich. Early on in his career Sampaoli displayed a youthful naivety and restlessness which was perhaps born out of his burning desire to prove himself as a coach on the biggest stage. Sampaoli’s time in Peru was marred by the perception that he was always on the look out for a bigger job.

Following his time in Peru , Sampaoli packed his bags and pitched up at Chilean club O’Higgins in 2008. Sampaoli’s style intense pressure , fitness and his mantra that possession of the ball is paramount for victory soon won over his players at O’Higgins and his new team quickly started to show improved performances, qualifying for the end of playoffs three times as well as the Copa Sudamericana. Following his successful time at O’Higgins, Sampaoli was hired by Ecuadorian side Emelec in January 2010.

The timing of this move was not ideal. Sampaoli’s method of play like Bielsa and Guardiola requires intense preparation. Sampaoli only had a matter of weeks when he took over to prepare the side and this was never going to be enough time for Sampaoli to implement the changes he felt were necessary. The team managed to beat Argentinian side Newell’s early in his reign and qualified for the Copa Libertadores. This was to be one of few highs however, the team performed abysmally in the group stages and finished last in their group.

Emelec performed poorly in the league as well as the Libertaodres causeing both the fans and the local media to turn heavily against Sampaoli. Many coaches would have walked at this stage and argued that he was never given a chance, that the players were unresponsive to his methods but to his credit Sampaoli stuck at his task. He continued to work on the same thing on the training ground believing that hard work and preparation were always bound to pay off. He was right and Emelec turned the whole situation around. Emelec won the league’s first stage and he also qualified to the 2010 Copa Sudamericana and the 2011 Copa Libertadores.

This ability to stick at his task led Club Universidad de Chile to approach him about taking over as manger.
In a very successful first half of the 2011 season, Sampaoli’s team finished second in the qualification phase of the championship, and made easy work of the playoffs, beating San Felipe in the QF (3-2 aggregate) and O’Higgins in the SF (8-1 aggregate).

Sampaoli followed this by the greatest achievement of his career, winning the Copa Sudamericana, with a swashbuckling Universidad De Chile team who finished the competition unbeaten, with only two goals conceded, with the competition’s top goalscorer, Eduardo Vargas.

The real success of Sampaoli lies in his self-belief and his commitment to entertaining, progressive and winning football. Like Busby and Shankly he believes that people who work all week and pay their hard earned money to watch the match deserved to be treated to entertaining football as well as winning football. Sampaoli is an avid fan of Marcelo Bielsa’s progressive playing style, his teams favour an attacking approach mainly playing with three “defenders”, two full-backs, one midfielder who acts the pivot, one attacking midfielder, two wingers and one centre forward. He has declared that although they are not close friends he has a good relationship with Bielsa, and he considers him to be a distant mentor and he calls him from time to time to chat about his progress as a manager.

Sampaoli is also a user of the managerial software tool Kizanaro that allows him to statistically study his opponents and prepare independent plays from match to match depending on the opponent’s weaknesses and strengths. This highlights his attention to detail which compliments his attacking philosophy perfectly. This combined with his ability to win football matches means that his star will continue to rise.