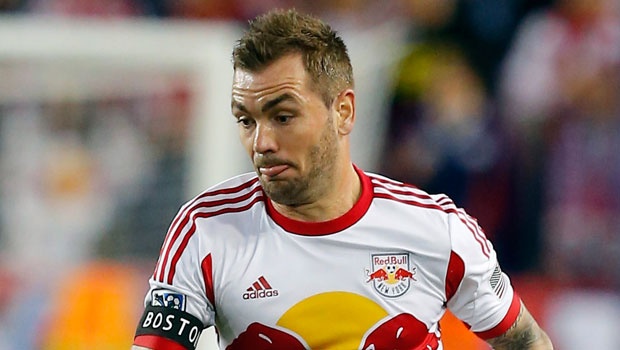 It’s February 2013. Having returned to the United Kingdom following his release from MLS outfit Real Salt Lake, Jonny Steele is considering an offer from Conference side Macclesfield Town after impressing on trial.

However, before the Northern Irishman could pen a deal at the Moss Rose, Steele received a telephone call in the early hours from New York Red Bull’s head coach, Mike Petke, looking for some last minute rotation players ahead of the new MLS season. Steele promptly accepted and left north Cheshire for the Big Apple.

After a remarkable debut season at the Red Bulls, playing alongside the likes of Tim Cahill and Thierry Henry, the Northern Irishman hasn’t looked back and is set to make his senior international debut against Turkey on Friday.

While the future looks bright for Jonny, the midfielder has endured an incredible roller coaster journey to reach the glamorous heights of New York.

After being released by Wolverhampton Wanderers at the age of 18, Steele opted to ply his trade in the United States, but his first spell chasing the American dream was rather unsuccessful.

A fruitless trial with FC Dallas in 2003 resulted in Steele trying his hand at the obscurities of indoor soccer, turning out for the likes of Kansas City Comets and Balitmore Blast, while also getting a taste of the lower tiers of America’s footballing pyramid.

After briefly returning to Northern Ireland in 2005 to play for mid-table Irish League outfit, Ballymena United, Steele made his way back to North America for a second stint, playing in the second tier for clubs such as Carolina RailHawks, Puerto Rico Islanders and the now defunct Vancouver Whitecaps – as well as another season playing indoor soccer, this time with the Philadelphia KiXX.

The midfielder’s chance of reaching America’s big time finally came in the 2012 season after signing for MLS side Real Salt Lake, but was cut short after one season due to the introduction of the league’s new salary cap and was released in December 2012.

However, since Mike Petke’s late night telephone call, the Northern Irishman has gone on to enjoy a remarkable debut season for the Red Bulls, winning over the fans with his commendable work ethic. Despite his setbacks, through sheer grit and persistence, Steele has become an integral first team regular despite being initially signed as cover.

It proved to be a bittersweet final game of the season for the midfielder as although the Red Bulls were narrowly knocked out of the MLS Playoffs by Houston Dynamo, Steele learned shortly afterwards that he had been named in the Northern Ireland squad for the first time.

An incredible feat that was surely unthinkable only 9 months ago.