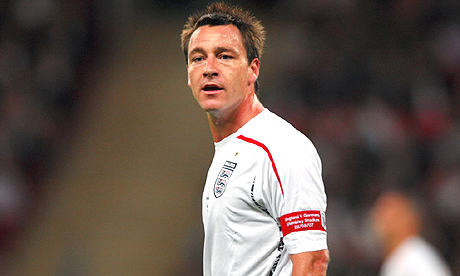 “I feel the FA, in pursuing charges against me where I have already been cleared in a court of law, have made my position with the national team untenable,” said Terry in a not-so-subtly worded statement.

Terry is of course referring to the incident last October when he was alleged to have racially abused Queens Park Rangers’ defender Anton Ferdinand. Terry was charged by the Crown Prosecution Service and found not guilty but is now facing a separate investigation conducted by the Football Association.

Terry is certainly correct that he has been cleared in a court of law of racial abuse. In fact on the face of it, what Terry has said is perfectly reasonable. Terry’s defence relied on the context of what was being said but it was enough to provide “reasonable doubt” to the jury and thus no other verdict other than “not guilty” could have been reached. But the Football Association’s hearing will operate much differently to that of the courts of law, rather than trying to find a verdict “beyond all reasonable doubt” they will judge the case on “the balance of probabilities”. Terry’s defence of context, therefore, may be on less solid footing given that Terry did use those words on that night in whatever context.

Some pundits have already suggested that Terry has been advised that he may lose the upcoming case and has decided to walk rather than be pushed, particularly with the prospect of an eight-game Premier League ban hanging over his head anyway (as was given to Luis Suarez when he was found guilty of racially abusing Patrice Evra soon after Terry’s alleged outburst). Or maybe Terry just does feel like the victim throughout this whole saga.

Of course, this begs the question of how Rio Ferdinand and Wayne Bridge must be feeling at this moment in time. Both men saw their international careers ended due to Terry’s actions and Ferdinand in particular has been vocal about how he has been treated by the national set-up. Bridge had a major fall-out with Terry after it was revealed that the Chelsea centre-half had been having an extramarital affair with Bridge’s former partner. Bridge subsequently refused to shake Terry’s hand in a Chelsea – Manchester City game and before long announced his retirement from international football, ironically because he felt his position in Fabio Capello’s upcoming World Cup squad would be “untenable…and divisive”.

The potential end to Ferdinand’s international career was not of his own choosing, however. Having the brother of the man who accused Terry of racial abuse in the international fold was always going to pose a problem for the new England manager. Some felt Ferdinand shouldn’t have been taken because of the question marks over his fitness (though he had just completed 38 appearances for Manchester United the previous season) whilst others felt Terry shouldn’t be risked with a racial abuse charge hanging over his head (though in British justice anyone is presumed “innocent until proven guilty”).

As it was, Roy Hodgson chose to drop Ferdinand for what he described at the time as “footballing reasons” (a claim which would be laughed off by many a few weeks later when Hodgson called up Liverpool youngster Martin Kelly to replace injured centre-half Gary Cahill). Ferdinand refused to retire completely from international football but conceded that his international career was more-than-likely over, and has since indicated that he would follow his brother’s example and refuse to shake Terry’s hand the next time Chelsea meet Man Utd.

Neither felt they could work with Terry and while Bridge probably felt it best to jump before he was pushed (he was in all likelihood only going to South Africa to play second-fiddle to Ashley Cole), Rio was as surprised as anyone to find himself out of the Euros after what some considered one of his best seasons at Old Trafford. Now Terry is the one facing a future without international football, playing the victim card despite sending two England teammates into premature international retirement.

None of this is to suggest that Terry won’t be missed for England. He was an extraordinarily talented centre-half and one of the very best footballers to play for England in decades, winning 78 caps for his country. Any hype surrounding his ability was thoroughly justified and he continues to put in superb performances for Chelsea week-in, week-out in both national and European competitions. When Chelsea or England play without Terry at the back, they miss his leadership and his natural ability to read the game from the back.

But former England captain or no, the FA are more than entitled to conduct their own inquiry into that infamous night when Terry allegedly abused Anton Ferdinand. They began their own investigation well before the Crown Prosecution Service charged him and suspended it when criminal proceedings began in the interest of fairness. Terry was found not guilty by the jury, now the FA must, in the interest of fairness, continue their investigation in the same way they investigated Luis Suarez.

Terry’s off-field reputation, after two stripped captaincies and a series of press revelations, now precedes his on-field one and for such a talented footballer that’s a real shame. He may no longer be in his prime but Terry still has something to offer this England side on the pitch, though perhaps he has become a far too divisive figure himself off it.