Ireland don’t have a large selection of players to choose from but there may be use for one of the old guard ahead of the final World Cup qualifiers.

If Seamus Coleman’s devastating leg break has taught us anything, it’s that his leadership and quality has been key to making the Irish team tick in their success of recent times, mainly qualifying for the European Championship and reaching the last 16 of the tournament.

Ever since taking over as the permanent captain in the famous win over Italy, it’s hard to fault him in the role and up until his leg break, the World Cup qualifying group was going according to plan.

When Neil Taylor’s reckless challenge on Coleman happened, many Irish heads went into their hands and knew how big of a loss Coleman would be for the rest of the campaign but after a while fans became confident in the idea that Cyrus Christie could deputise for Coleman and do a good job for the remainder of the campaign.

This, with the power of hindsight, was a naive frame of mind.

There has been signs of promise in Christie’s short Ireland career including filling in for an injured Coleman in the famous 1-0 win over Germany in the Aviva which is what lead Irish fans to believe he was a ready and able replacement for the Everton right-back.

It’s perfectly fine for Christie to fill in for Coleman for one or two games on a temporary basis but when an arguably world-class right-back is out for a long spell, you need a consistent and reliable second choice.

It was evident from the latest round of fixtures against Georgia and Serbia that this Irish team has its issues, particularly the lack of creativity (bar the wonderful Wes Hoolahan, who Martin O’Neill doesn’t play nearly enough as he should) and having a consistent goalscorer up top.

However, Christie looks to be a weak link in an overall decent looking defence.

When it really mattered, Christie was exploited as he was caught out of position in the lead up to Georgia’s goal to earn them a point in Tbilisi while also looking poor in the final third while pressing for a much-needed equaliser against Serbia.

Being greedy on the ball when crosses were on, not being able to beat his man and needlessly cutting in and shooting on his weaker foot were just a few of the general criticisms, that are hard to argue with, the Middlesbrough man had to take.

This is not to say Christie will not be a good player for Ireland in the future.

At 24, he’s one of the youngest players consistently getting selected for the team but the fact is Ireland have made it very difficult for themselves with the last two results and as a result, the final two games facing Moldova and Wales are two of the most vital games Ireland will experience for a long time.

In games of such high importance, Ireland cannot afford slip ups or to have any liabilities on the pitch. Instead, a time like this is more suited to experienced, calm and composed players to come into the team.

This is where John O’Shea should be welcomed back into the starting eleven.

It cannot be denied that Shane Duffy and Ciaran Clark have come on leaps and bounds as a centre back pairing at international level and after helping Brighton and Newcastle both get promoted last season, they should be the first defenders on the team-sheet.

However, O’Shea is famous for his versatility and he is no stranger to the right-back position.

Up until after Euro 2012, Giovanni Trapattoni was reluctant to welcome Seamus Coleman into the fold as the Sunderland defender was his first choice to play the right-back role.

Since then, Coleman has made the position his own and full-backs have become even more known to be attacking assets rather than deploying centre backs there. 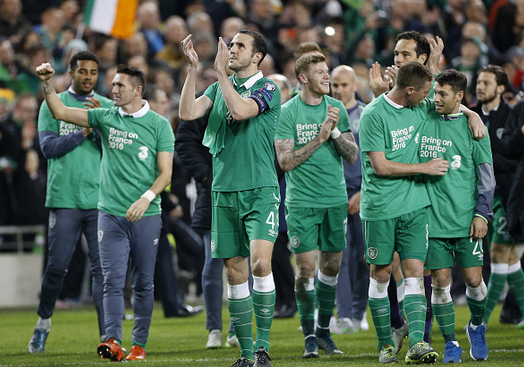 There are becoming a lot less Jamie Carragher’s and Branislav Ivanovic’s playing at right-back nowadays but O’Shea played there plenty of times for Manchester United and for his country so these upcoming two qualifiers is an ideal chance to return to a familiar role.

No, O’Shea won’t be an overlapping full-back who bombs down the wing and offers a lot going forward but unlike Christie, he reads the game terrifically and adds a wealth of vital leadership to the team.

This is what the Irish team needs when you take into consideration the individual threats Wales pose of new kid on the block Ben Woodburn and Real Madrid star Gareth Bale.

O’Shea took care of the latter admirably in the goalless draw at the Aviva.

Since Coleman’s injury, Glenn Whelan and Jon Walters have shared the captaincy and O’Shea, no stranger to the armband, can take over and lead the team with his experience.

The former Manchester United man may be past his best but his character and influence on the field should be a no-brainer when it comes to such all-or-nothing fixtures.

When Sunderland were relegated last season and preparing for Championship football, much maligned pundit Paul Merson was waxing lyrical about O’Shea and how he needs to be kept on when overhauling the Black Cats squad.

With O’Shea, he’s got that experience, he’s a good centre-half. I think you need him to organise things and try and get them up.

The former Arsenal man, known for outrageous statements, was talking sense in this case. O’Shea’s experience is crucial.

The Waterford-born man was surprisingly not retained by Sunderland at the very start of the season but new manager Simon Grayson re-signed O’Shea one day into his new job.

The vice-captain has been resorted to cup appearances and the rare league cameo but it’s common knowledge that a player of O’Shea’s calibre will help a promotion push on and off the field.

This is not to say that risks don’t need to be taken in the next two fixtures. For example, many Irish fans would be in favour of Preston prodigy Sean Maguire making his debut at competitive level against Moldova and featuring in Wales too in a bid to become more clinical in front of goal.

However, being the only player available for selection with over one-hundred caps has to count for something with regard to O’Shea.

If included, he’d certainly bring a maturity to the team and his defensive reliability may allow a more attacking approach to must-win games.

There’s no shadow of a doubt, at 36, O’Shea is in the twilight of his career but that’s all the more reason Ireland should take advantage of the most calm, composed and experienced character at their disposal.

O’Shea is the only remaining member of that group of such quality Irish players and will be missed when he retires. In what will more than likely be his last qualifying campaign, Ireland should use him while they still have him.