The Newcastle Jets finally hit the headlines for reasons on the park as opposed to off it when they picked up their first win of the season against Perth Glory on Friday night. The club was in danger of folding last week until the intervention of the Football Federation of Australia (FFA) but goals from Michael Bridges and Labinot Haliti gave the fans something to celebrate for a change. Former Leeds United and Sunderland striker Bridges struck with a stunning volley in the first half before substitute Haliti made the points safe with a well placed finish late on. It was a second consecutive lascklustre performance from the Glory who had been unbeaten until last weekend’s defeat to Gold Coast United.

Another side bagging an important home victory was the Melbourne Heart who beat Wellington Phoenix 2-1 at AAMI Park on Sunday afternoon. Ex-Socceroo star John Aloisi netted his first goal for the club and should have had a second but somehow contrived to strike the crossbar from inside six yards. Brazilian striker Alex Terra’s excellent finish looked to have sealed the win but Tim Brown pulled one back for the Kiwis to set up a nervy finish. The Heart held on however, recording their first ever win on home soil.

Two of the league’s best sides, Brisbane Roar and Adelaide United, played out an entertaining 1-1 draw on Saturday evening. In form Adelaide midfielder Mathew Leckie, who may be plying his trade in China soon, opened the scoring with a well struck effort on 28 minutes. The league didn’t last long however with the hosts equalising just seven minutes later through Thomas Broich’s free kick that evaded everyone to find the net. The game will be most likely be remembered for an horrendous miss by United’s Sergio Van Dijk. Barely three yards out with no keeper to beat, he somehow scooped Marcos Flores’ cross past the past and the head in hands reaction from the crowd said it all. 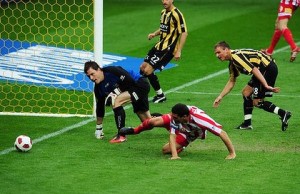 North Queensland Fury and Melbourne Victory played out a 0-0 draw at Dairy Farmers Stadium in a game where the better chances fell to the home side.  Chris Grossman was particularly wasteful in front of goal and Fury skipper Ufuk Talay’s long range drive forced Michael Petkovic to make a superb save to keep the scoreline blank. Last season’s A-League Player of the Year Carlos Hernandez was kept quiet throughout and Victory would have been happy to return back to Victoria with a point.

There was also a stalemate at Skilled Park where Gold Coast United and the Central Coast Mariners played out an uninspiring draw in front of dismal crowd of just 2037. Gold Coast enjoyed the majority of possession throughout but failed to turn it in clear cut chances, while the Mariners failed to register a single effort on goal. Jason Culina showed in class but even he couldn’t inspire the few paying spectators in what will surely be a contender for the worst game of the season.