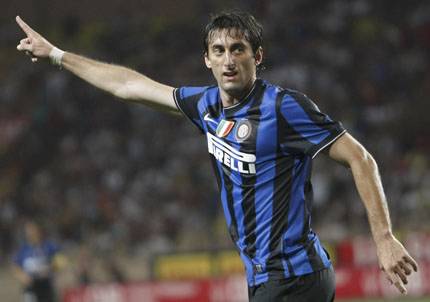 It’s a topic we all love discussing, and we all have different opinions about.  Some of us would rather see a pure poacher in the lineup while others believe that target men are the most effective and still more believe that a striker who plays well with the ball at his feet is essential.

We can debate the merits of Antonio Di Natale or Fabrizio Miccoli until we’re blue in the face.  Well, I’ve decided to add some fuel to the fire with the Sports Opinionated Attack Rating (SOAR).  If you’d like an explanation of how it’s created, here is a full one.

In short, I’ve used some basic attacking stats like goals, assists, shots on goal and times fouled to estimate the attacking impact of every forward in Serie A as if they played 90 minutes every game to equalize for playing time.

Now given that I’m the same guy who once wrote that Ronaldinho has lost it, and also have had some great debate on the merits of Eto’o for Inter, I thought I would answer some key striker-related questions from around Italy using SOAR.

Which forwards are the most important to Inter?

This was a hotly debated topic going into the CL final, and there still seem to be many who would love to continue the debate.  In order to stir the pot a little more, take a look at this table.

Keep in mind that SOAR only shows the offensive impact a player has had, so it won’t account for the amount of tracking back and defensive work that Pandev and Eto’o performed so well on the season.

The most obvious thing that jumps out, is how effective Super Mario Balotelli was when he was on the pitch.  In fact, he had the highest SOAR rating in all of Serie A.  What makes Balotelli so effective is that he’s so versatile.  He gets a high number of balls on the net, is adept at finding others for an easy goal and has an amazing ability to draw fouls when the ball is at his feet, as we discussed on the Pink Shirt Wise Guys podcast.

The interesting notion to me, as well was that while Pandev and Eto’o essentially performed the same role, it was Pandev that was much more effective offensively.  The main concern seems to be Eto’o’s ability to hit the net.  He was only on target 34% of the time, which was lower than any other Inter forward and well below the league average of 44.6%.

Should Milan really try to buy another striker this summer?

This is my own personal “scratch my eyeballs out with a chopstick” topic.  It continues to infuriate me that the AC Milan brain trust seem to be shopping for a striker while there are massive holes in midfield and the back line.  Assuming that their new coach continues to deploy a system where Ronaldinho and Pato are wingers or support strikers, does Milan need a new player up front?

Apparently my incessant moaning for Huntelaar to get more playing time has been unfounded.

The Expected SOAR (eSOAR) is calculated just using a players SOG, not their actual goals.  It’s a measure of the player’s ability to get in dangerous positions, while the SOAR was the measure of what they did in those positions.  In this case, both Huntelaar and Borriello did very little to put themselves in good positions, but made the most of those positions, either through great finishing, a bit of luck or a combination of both.

Most of the top strikers have a rating in the range of 0.850 to 1.100, so it’s actually feasible that Milan could get good value out of a top notch finisher.  I will now staple my mouth shut.

Which strikers should start for Italy in the World Cup?

Given that I write about sports, obviously my favorite hobby is criticizing coaches.  In this case, I’m not going to debate the merits of who Marcello Lippi selected, but I would like to evaluate the players he has at his disposal.

As you can see, and most people already believed, Gianpaolo Pazzini is clearly Italy’s most effective strike option.  Not only did he score, but he drew an immense amount of fouls from opposing defenders.

The question will be whether Lippi decides to play a trident or a strike partnership.

With Iaquinta’s back injury, he may not be available, and probably isn’t a good partner for Pazzini anyway given their similar styles.  That said, he should be the first choice substitution if he’s healthy.

Di Natale seems to be an automatic starter, whether on the left side or floating behind Pazzini.  He scored at an amazing rate and added 6 assists as well.  He’s a given.

Marco Borriello needs to be the next cut from this team.  While his SOAR is decent, his eSOAR tells me he doesn’t create dangerous opportunities.  Having watched him all year, this seems absolutely correct.  I would much rather see both Giuseppe Rossi and Fabio Quagliarella in the squad.

Which starter had the best season in Serie A?

By “starter”, I’m going to assume a cutoff of 2250 minutes which represents two-thirds of the minutes available to a player in Serie A.  As I stated above, it is much harder to play at a high level over a multitude of games, than to do it for the last 30 minutes of every game.  This filter eliminates the likes of Pato, Totti and Balotelli, who are all immensely talented but weren’t durable or couldn’t hold their temper enough to stay on the pitch.

Below are the top 10 in Serie A this year.

The top 6 players shouldn’t be a surprise to anyone who watched much Serie A this season.  All of these players were the headline grabbers throughout the year and their SOAR seems to confirm what we see with our own eyes.

Players 7 through 10, however, sure jumped out at me.  I wasn’t surprised to see Vucinic in the hunt as he’s had a phenomenal season, but the other 3 wouldn’t be the players I believe most Serie A fans would list off the top of their head.

Neither Lavezzi or Sanchez were very prolific in the scoring department, but they consistently drew fouls from opposing defenses, meaning they had the better of their defenders on a regular basis.

Massimo Maccarone on the other hand, had a phenomenal season for Sienna and would be a great player for the likes of Sampdoria to pick up to provide depth now that they’re in the Champions League next season.

Which small-club player is due to break out or move to a bigger club?

I eliminated all the European-bound teams and also Lazio, Udinese and Fiorentina as these clubs achieve a lot of exposure nationally.  I left both Parma in the mix, purely because they weren’t the subject of as many headlines as the rest.

It also required at least 1000 minutes of playing time to ensure that a few lucky goals our bounces didn’t sway the data too much.

Davide Lanzafame had an absolutely stellar season for Parma.  He scored in limited minutes, chipped in some assists and was fouled at an alarming rate.  For 8th place Parma to move into European contention next year, they need to rely on him more next season.

The Cagliari trio of Jeda, Nene and Matri all were very effective.  In this case, it’s hard to tell whether they played in a particularly good offensive system, or if they really were that impressive.  Either way, Cagliari is in good hands if they can hold onto at least two of the three, since Matri may get a chance at a bigger club.

While this may go against popular belief, I think Maxi Lopez may be a much more superior striker than the likes of Borriello.  Their numbers may look similar in that they both seem to outperform their eSOAR, but Lopez hits the net at a much higher rate than Borriello, leading me to believe that he is a more accurate shooter.

Finally, Martins Adailton could be an interesting signing for a mid-level club like Bari who has a great defense and needs to add some firepower along with Barreto.

If there are scenarios you’d like me to compare using SOAR, let me know either in the comments or email me.

I would like to add crossing statistics to the mix, but at the moment it’s very hard to find reliable data for Serie A so please pass on any sources you may have.

I will likely be adding in players from other leagues throughout the summer and normalizing for the goals scored per game in each league.

At some point I will also start using SOAR to show the attacking value of different midfielders and fullbacks but would like to have crossing stats first given that it’s a much bigger part of their game.

Apologies for the resolution of the images above, due to limits they had to be resized.

While I have a day job, what feels natural to me is to be fanatical about sports. I spend all my free time checking on injury reports, watching games, cursing lineups and predicting who will sign which players in the transfer period. I love to discuss sports, I’m fairly argumentative and I need a creative outlet. I hope you enjoy what you read, and feel inspired to passionately argue and debate your own points. I also write for my own blog http://sports-opinionated.com and publish an Italian Football podcast called Pink Shirt Wise Guys at http://sports-opinionated.com/podcasting/