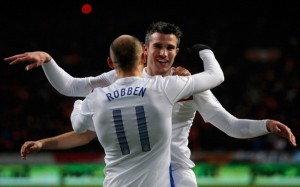 The Netherlands had it more difficult than expected against Group D minnows Andorra before eventually securing a 2-0 win.

The Dutch in fact were the first European nation to qualify for the 2014 World Cup in Brazil – beating Italy to the achievement by a couple of hours. Louis van Gaal’s side won thanks to a second-half brace from Manchester United striker Robin van Persie.

That result, coupled with Romania’s 2-0 home defeat to Turkey, ensured that the Dutch could not be beaten to first place in qualifying Group D.

The Dutch dominated the game but found it difficult to break down a resolute Andorran defence.

Having weathered the storm for the duration of the first half, the home side couldn’t hold out for long at the start of the second thanks to Van Persie, who linked up with Kevin Strootman for the opening goal. Strootman fired in a cross from the right wing and Van Persie delivered, scoring from 25-yards in the 50th minute.

It was Van Persie who found the back of the net again just five minutes after his first goal. Andorra goalkeeper Pol fumbled Darryl Janmaat’s cross and the ball fell to Van Persie, who slotted the ball into the net from close range.

The Dutch could have and probably should have at least doubled their lead through Rafael Van Der Vaart and Van Persie who could have sealed his hat-trick in the dying minutes but in the end two goals was enough for Louis Van Gaal’s side to book their flight to Rio next June. 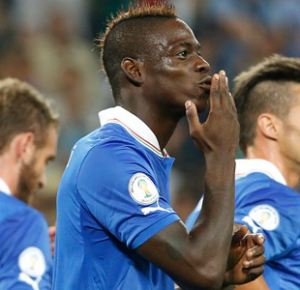 Four-time world champions Italy have joined the Netherlands by securing qualification for the 2014 World Cup after overturning a first-half deficit against the Czech Republic to prevail 2-1 on Tuesday night.

The Italians were in party mood but they had a reality check in the 19th minute when Kozak sent a superb first-time half-volley past Buffon after Petr Jiracek ran unchallenged down the left flank to whip in a perfect cross for the big striker.

Italy levelled five minutes into the second half through Juventus defender Chiellini who rose to meet Candreva’s corner to score in his home stadium.

The Azzurri took a huge stride towards Brazil when Balotelli (pictured) won a penalty following a crude challenge by Theodor Gebre Selassie and promptly stepped up to coolly beat Cech at the keeper’s right post. From there Italy held on to their lead relatively comfortably with the Czechs finishing with ten men as Daniel Kolar received a second booking late on.

In other Groups; Belgium, Germany and Switzerland have all secured their progress to Brazil bar the most unlikely of mathematical happenings.