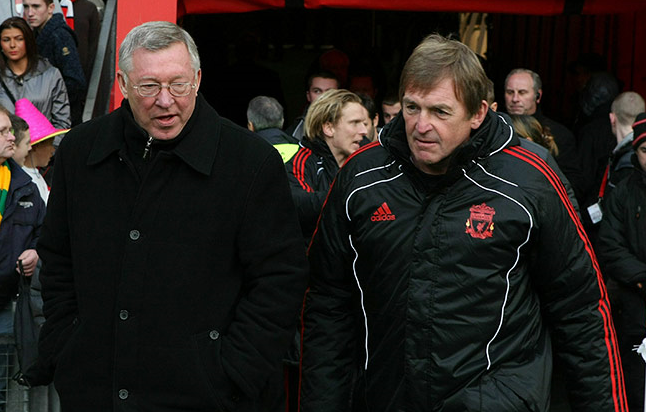 It seems strangely apt to ape the words of one of Liverpool’s most iconic exports to start a blog about Sir Alex Ferguson because back then Liverpool Football Club were the undisputed top dogs of English and European football. If anyone was going to challenge them for that honour it was thought to be city rivals Everton. Nowadays, Manchester United are supreme and Manchester City are currently their chief foes for domestic silverware.

So many kind words have been said about Sir Alex that I’m not sure any tribute by a lowly blogger could add much, but I thought a retrospective on what the First Division (yes, First Division) looked like on November 6 1986 and who was managing its 22 clubs. It might help put his longevity at least into perspective. All teams had played 13 games. 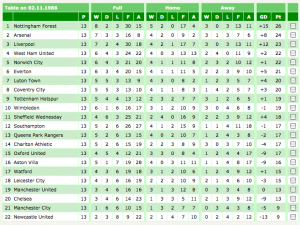 What can be said about Cloughie that hasn’t already been said. His 1986-7 side started well but couldn’t maintain the challenge eventually finishing in eighth place in the table. Clough died in 2004.

After sacking Don Howe in March 1986, Arsenal were interested in appointing Ferguson who was in temporary charge of the Scottish national team. The story goes that Alex insisted on waiting till after the World Cup and Arsenal instead opted for its former star player and then Millwall manager Graham. Graham would lead Arsenal to two League Championships, an FA Cup, two League Cups and a European Cup Winners Cup. Graham is now a pundit

Dalglish had been Liverpool’s manager for just one season but what a season it was, securing the first double in the club’s history, scoring the goal that clinched the League title and beating Everton in the first all Merseyside FA Cup Final. Dalglish would manage Liverpool to two more championships and one more FA Cup victory before resigning in 1991. Twenty years later of course he would return to Anfield.

Lyall was only West Ham’s fifth ever manager stretching back to 1901. He won two FA Cups and secured a club record best finish of 3rd the previous season. Lyall was sacked in 1989 and West Ham have had no major trophies and 13 managers since. Lyall died in 2006.

Brown was Norwich manager for seven years, he won the League Cup in 1985 with pl as well as relegating the team from the top flight. Given the chance he piloted a return to the First Division at the first time of asking and ended the 1986/7 season in 5th place (a then record for the Canaries)

Kendall was in his first, and by far the most successful of his three spells managing Everton. The Toffees would end up champions of England this season and Kendall remains the last English manager to win a European competition with an English club.

Moore was David Pleat’s assistant before taking his one and only managerial post in English football. The club finished 7th but he quit as he didn’t think that football management was the right career for him. Luton Town are in the Conference and play Fleetwood Town this weekend.

Curtis retired as Coventry City’s then record appearance holder, he became the club’s Commercial Manager in 1974, Managing Director in 1983 before being made manager in 1986. He was the manager who led Coventry to FA Cup glory in 1987, alongside first team coach John Sillett.

Pleat’s only full season in charge of Spurs was relatively successful they finished 3rd in the League and got to the FA Cup Final, but Pleat was sacked to make way for Terry Venables. Pleat has the best record in terms of winning percentage of any post war Tottenham manager.

Harry Bassett had guided Wimbledon from the fourth tier of English football to the the First Division in just four seasons and in August the briefly topped the table. Bassett’s last job in football management was as Dennis Wise’s assistant at Leeds United in 2008.

The last English manager to finish ahead of Sir Alex Ferguson in the league. Wilkinson is still involved in the game at Sheffield Wednesday as a director and with the League Managers Association.

Jim Smith was already a journeyman manager when he joined QPR, it was his sixth club of his eventual nine club managerial career.

Lawrence had secured Charlton’s return to the top flight after a 29 year absence, despite being locked out of their home ground The Valley. Charlton would stay in the top flight until the end of the 1989-90 season.

Maurice Evans and Mark Lawrenson hold the distinction of being the only two people to manage Oxford in the top flight. Evans did it for the best part of three seasons and won the League Cup, Lawrenson did it for nine games and failed to register a win. Evans died in 2000, aged 63.

McNeill achieved a rare feat in the 1986-7 season managing two sides that were relegated. He started the season at Manchester City but left to join Villa in September, come the final day of the season both were relegated.

Taylor was approaching the end of ten years distinguished service to the Hornets after leading the club from the Fourth Division to the First in five seasons, then finishing runners up in both League and FA Cup. Watford would recover to finish ninth and Taylor would replace McNeill at Aston Villa at the end of the season. His last job in management was in 2003, again at Villa Park.

In a forerunner to the Roy Evans/Gerard Houlier debacle at Anfield, the Filbert Street board supplemented existing manager Milne with Wigan’s Bryan Hamilton. Milne as General Manager and Hamilton as Team Manager. It didn’t work. Leicester were relegated.

Hollins is a true Chelsea legend playing over 450 league games for club, he’d threatened to win the Championship the season before topping the table in February before a poor run of form saw the Blues finish sixth. Now Hollins is more famous as the father of BBC Breakfast sports reporter and Strictly Come Dancing champion, Chris.

Frizzell became the first City manager to lose a Manchester derby to Sir Alex Ferguson in March 1987 and resigned after the club were relegated.

Northern Irishman McFaull was one of the rare bread of goalkeepers turned managers and he was able to rely on the talents of a young Paul Gascoigne to drag the Toon off the foot of the table to escape the clutches of relegations.

Only one of those managers is managing at any level now, at that was Kenny Dalglish who was young enough to be a player-manager at the time. It’s a remarkable testament to Sir Alex’s longevity that he’s managing at all – let alone at the very top of his profession.

It’s also a nice quirk of fate that the current incumbents of the top four places in the Premier League were the bottom four teams in November 1986. They’ve all travelled very different paths to where they are now, between them Manchester City, Chelsea and Newcastle have used 52 different managers (including caretakers) in the 25 years that Sir Alex Ferguson has been in charge at Old Trafford.