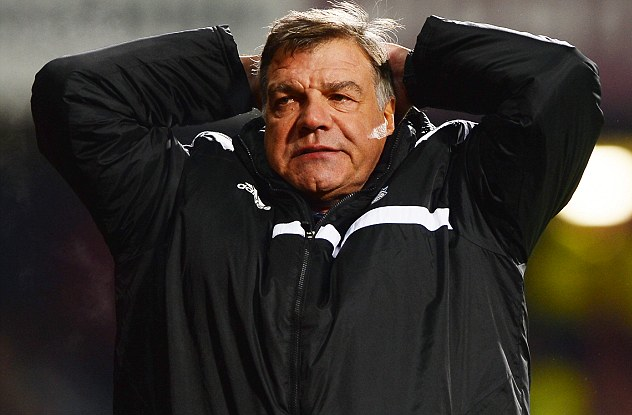 Sam Allardyce’s face is somewhat that of an open book. Whereas the more media savvy managers of the Premier League strike a more guarded figure whether winning or loosing, the opposite can be said of ‘Big Sam’. When winning the grin that stretches across Allardyces’ face looks as if it could stretch from East London to his old stomping ground in Bolton. That grin was nowhere to be seen on Saturday evening as a chorus of boos hung in the frigid air around Upton Park.

Those booing would steadfastly contend that their protestations were justified, and in truth it was a fairly depressing display from their beloved ‘Hammers’. I don’t think many would have expected West Ham to beat Chelsea – something the Hammers have only managed twice in the past ten years – Chelsea have a far superior set of players to deploy, but the manner of the defeat – a turgid display in which West Ham managed a solitary shot on target which came right at the end of the 90 minutes – would have done nothing to dissuade the angry masses.

Allardyce will no doubt point towards an injury list as long as his arm, and in truth it’s one of the worst any Premier League club could be afflicted with. This has led to Allardyce’s famous tactical pragmatism ruling the chalk board in the dressing room, with West Ham lining out in a 4-6-0 formation. In the short-term this would seem a logical solution to a lack of attacking options but in the long-term this model seems unsustainable, particularly so if the West Ham defence seems so prone to basic errors the like of which gifted Chelsea an early lead at the weekend.

What was interesting from a tactics point of view was the double substitution West Ham made in the first half. Neither player seemed to have been injured so one would assume these were tactical and, more worryingly, that Allardyce had lost faith in his starting eleven very early on.

Here’s where questions over the manager’s ability begin to crop up. No one is under the illusion that Allardyce is Guardiola in disguise – except save for himself, who famously declared hypothetical success at Real Madrid – however the lack of ideas and tactical evolution shown between this season and the last seems to be more pronounced after each disappointing result.

After the shock 3-0 victory at White Heart Lane earlier this season the face-wide grin on the West Ham manager’s face was there for all to see, in fact all he was missing was a Cuban cigar to complete the Hannibal from the A Team-esqe image – ‘I love it when a plan comes together’ – the reality was slightly different, less to do with Allardyce employing the perfect tactics and more to do with Spurs’ naïve defending and profligacy in front of goal.

And while Allardyce can claim poverty of match fit talent when faced with better-endowed sides the real culprit of this situation is looking back at him in the mirror. It may be the case, as is the realities of modern football, that a number of individuals are involved in a club’s transfer dealings – Chairman, Director of Football, agents, scouts, statisticians etc – but the buck ultimately has to stop with the manager. If Allardyce is to be judged on the summer’s transfer window then the results do not shine a positive light on the 59-year old from Worcestershire.

If, as I mentioned above that, the number of staff roles that influence a club’s actions is increasing in English football – following the European tradition – it means that the manager’s role is being shrunk, or rather their influence is being diluted by the introduction of other experts. The one facet of club policy where the manager does have dictatorial control is the tactical vision he wants the club to follow in its quest for success. The best managers plan years into the future, building a squad of youth and experience combined to best withstand the rigours of modern football. Sir Alex Ferguson famously divided his squad into three developmental stages, all in aide of planning his squad for years to come.

The tale of the most recent transfer window tells us blatantly that Allardyce had only one tactical vision in mind. ‘Plan A’ or rather ‘Plan Andy’. I’m a fan of Andy Carroll his height and strength in the air providing something particularly rare in the age of nimble, elven strikers – something England could do with to give them a different attacking option next summer. Carroll has also been unfairly burdened by the ridiculous exchange of money that took place when Liverpool signed him from Newcastle United – something the player had no say in. Yet the £15 million spent by West Ham to make his loan move a permanent one seemed high at the time (And down-right suicidal given his season-threatening injury) bearing in mind he mustered only 7 league goals last season.

It is clear that, along with signing of Stewart Downing for £5 million, that Allardyce’s tactical vision centered around supplying his center-piece striker with enough service to reap a greater return this season and ultimately push on from last season’s performances. The problems with this approach have become abundantly clear as injury has led to ‘Plan A’ dissolving to reveal very little of substance underneath. The West Ham defence has been living on borrowed time for years – Winston Reid’s performances being the solitary plus from a defence built on over-priced Championship standard talent. The goalkeeping prowess of Jussi Jaaskelainen has been declining for year-on-year consistently and it may be time for the 38-year-old to consider hanging up his gloves in the near future. In midfield Allardyce seems committed on Kevin Nolan being the attacking fulcrum, something which would not fill most West Ham fans with confidence.

It’ll be interesting to see, bearing in mind if Allardyce can lift West Ham away from the relegation zone, whether the manager will be backed in the January transfer window. And if he is, wether he can overcome his own tactical stubbornness an employ a ‘Plan B’ to secure West Ham’s season and perhaps his own job come the summer.

2 thoughts on “Is the Allardyce bubble about to burst?”