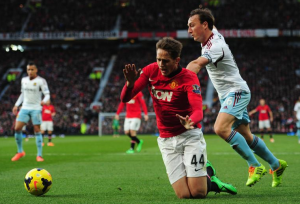 As we progress from what is broadly acknowledged as a poor year for officiating, support for a major reform in football is growing. The concept of a sin bin is somewhat alien to the average football fan; one that has been dismissed for many years as destructive to our beloved Cambridge Rules of 1848, yet, such a radical notion is becoming increasingly popular in football circles. I will be addressing the salient, divisive, Blatter-endorsed matter of the sin bin: can it be a success?

Effectively, a sin bin is a method of disciplining offenders “with 10 or 15 minutes out of the game”, as UEFA Chief Michel Platini suggested. The sin bin currently exists in rugby, ice hockey and, er, the Italian Amateur Christian Football League, functioning with relative success. The bin serves as a less severe sanction than a red card, but more impactful than brandishing a yellow, resulting in the wrongdoer’s dismissal for a fraction of the game.

Advocates of such an idea opine that its implementation into the beautiful game would eradicate the prominent impurities of its modern composition. Generally, it is agreed that sinners would be binned for dissent, feigning injury and dives. However, Platini has also voiced a desire to stop goalkeepers guilty of fouling as the last man trudging down the tunnel for an early bath, “it is too excessive”, declared Platini, “the penalty is enough.”

Moreover, supporters discourse that the spreading pandemic of simulation will have a potent cure: 15 long minutes on the touchline, watching your teammates in the lurch, toiling to ensure the absence of their theatrical winger is not detrimental to the battle for survival. Had Oscar been on the sidelines after his shameless tumble over the Saints’ ‘keeper, he would not have been able to create Torres’ goal minutes later.

Furthermore, Frenchmen Platini and Wenger pose compelling arguments for the sin bin, “if a guy gets a second yellow, he’s suspended for the next game. But, he might be facing Manchester United in his next game, so they have an advantage, yet the team that he fouled against on the day has no advantage. On top of that, they are at a disadvantage because one of their rivals has benefited.”

This prominent flaw in the current rulebook was demonstrated recently, with tireless Brazilian Ramires suspended for the Pensioners’ clash with Liverpool, despite obtaining the bookings against fellow title challengers Manchester City and Arsenal, who did not benefit from the sinuous midfielder’s indiscipline.

Well why not go all the way and bring in cheerleaders, sirens when you score and pitch divisions every few yards?

Inevitably, there are many in opposition of such drastic reforms. Some contest that the implementation of a sin bin would be a direct challenge to the tradition and integrity of the game: as one opinionated fan appositely stated: “COME ON PEOPLE! Sin bins would turn football into a freak show of players trying to get other players sin binned.” A valid argument.

Withal, card-wielding ref-turned-columnist Graham Poll has condemned the proposals of the sin bin: “they are the orange card every referee wants but will never get.”  Poll believes that the organisations responsible for football legislation will never agree to such a major change in football rules.

Likewise, there are many shortcomings to the aforementioned proposals, explicitly, the effect of an orange card, should that be the apt colour to represent the bin, would have on a game. If a player was sin binned for an offence, the team suffering with ten men is likely to resort to a defensive style, preventing the opposition from capitalising. Plus, the team is likely to waste time in order to decrease the time the opposition has to exploit the depleted side.

Forbye, the officiating of a game could significantly alter, with bookings becoming even more common in the presence of a higher sanction: yet another grey area. Also, should the ref misjudge the situation and issue the orange card, the game would turn on its head with devastating effect, destroying the game. Granted, red cards do the same, but, unavoidably, the lesser sanction would be applied more often than the notorious red.

Finally, and perhaps most importantly, the sin bins could stimulate a new realm of gamesmanship, as devious gaffers utilise the sin bin for tactical advantage. An example of such adroit exploitation would be a purposeful sidelining to recover from injury or receive further treatment. Or, the offender could receive tactical advice while out of action.

In conclusion, I align with the 78.14% of Telegraph readers who agree that the sin bin would be a welcome addition to football across the world. Its advantages outweigh its disadvantages and although the immediate and ravaging influence it would have on the game would be great, the long term positives of the sin bin would change footie for the better. Though the sin bin notion is merely “an idea … it needs to mature to determine if it really is good for the game”, as Platini stated, plans are in motion for next season in the Dutch youth league to play with sin bins. The Dutch football body have implemented rules that will see a player removed from the action if they receive a booking, and anyone who has been banned will have to show that they have improved their conduct before being allowed to return.

Fingers crossed such progressive ideas make their way across the Channel; there have been 13 yellow cards for diving in the English Premier League so far this season. Something has to change.