After watching Salford City attempt another FA Cup “giant-killing” against Hartlepool United on Friday night I found myself wondering; are they really a minnow team?

When asked the inevitable question before the game on BBC, questioning if he feared being beaten by a lower league side, Hartlepool manager Ronnie Moore alluded to his own side feeling like the underdogs. It’s certainly not unbelievable. 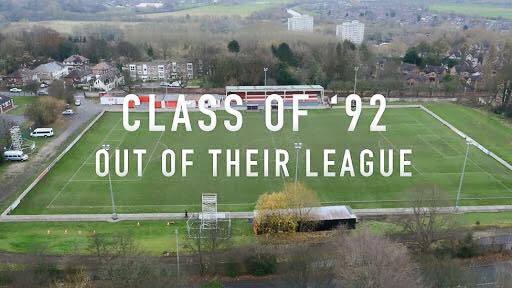 Their League 2 rivals Notts County were beaten 2-0 by the same team just a month previous. That’s the same Notts County that sits five points ahead of them in the league. And Salford City certainly seems to have the BBC on their side.

When Gary Neville, Phil Neville, Nicky Butt, Ryan Giggs and Paul Scholes purchased Salford City Football Club in 2014 they must have known that it would have caused a stir among the other non-league clubs. Inviting Peter Lim to then purchase half of the club from them added fuel to the fire.

Salford City has come in for some criticism on social media since they were taken over by five local multi-millionaires and a Singaporean billionaire. Doesn’t sound quite as romantic as “five local boys come together to purchase struggling football club” does it?

Stephen Kingstone, a fan of the club and local reporter spoke on the “Class of ’92: Out of their league” BBC documentary, claiming they showed “Premier League arrogance” by coming in and trying to change the club.

In an article he wrote the owners were also described as being from “the class of Vincent Tan” – the much maligned owner of Cardiff City FC.

There can certainly be some comparisons drawn from the current ownership of the club and Tan’s reign at Cardiff City. The most glaringly obvious being the billionaire Asian owners. Other than that, there are the kit changes.

Tan swapped the Bluebirds’ traditional blue kit for a red one, to make it more marketable to the Asian audience. Safe to say the decision was about as popular as Sir Alex Ferguson is amongst Kopites.

When the Class of ’92 took over The Ammies’ kit was changed from their traditional orange and black to a distinctly familiar looking red and white. Is there any chance that was done to make them more marketable to Manchester United fans?

Just having the “Class of ‘92” in charge makes the club more appealing than most clubs in the National League, not to mention those in the Northern Premier League Premier Division.

This isn’t just limited to player, but television stations also. The BBC ran a two-part documentary on the club, followed by showing their first and second round games. They have decided not to show the replay against Hartlepool United, but unsurprisingly BT has chosen to air the game.

The club’s new owners are not afraid to splash the cash, as evidenced in the BBC documentary. The stand was completely renovated to accommodate the club’s re-branding, a whole new kitchen was built in the ground and they put on a big party for the staff in a swanky hotel.

The vast majority of non-league clubs could only dream of being able to afford all that in the space of a year.

The wealth spreads to the players also, of course. Gareth Seddon, Jason Jarrett and Danny Webber allegedly commanded £1,100 p/w between them in the 2014/15 season. Jarrett has since left, but the other two remain.

Wages aside, the players were treated to a Premier League style pre-game meal before a league game last season in the same hotel as the staff party. How many non-league clubs have ever had a proper sit-down pre-match meal in a nice hotel? Not many I’d wager.

Just over five miles separates Salford City’s ground Moor Lane and Broadhurst Park, the home of FC United of Manchester. Salford City are 55 years older than FCUM, but their resurgence in the last couple of seasons will lead to people comparing and contrasting the clubs.

FC has its detractors, but they command respect for what they have achieved so far after beginning with so little. They were the favoured non-league club for a time by the mainstream, much to their dismay at times.

The limelight has been taken by the more marketable and presentable Salford outfit. A lazy comparison is those clubs being the non-league version of United v City, somewhat ironic with Neville et al owning the City equivalent.

People need to look past Salford City’s league position when thinking of them as a non-league outfit that shouldn’t have a chance against League 2 clubs. They are funded by six filthy rich owners.

For the players on the field it’s a good achievement to beat clubs two divisions ahead of them, no doubt, but it’s not “magical”.