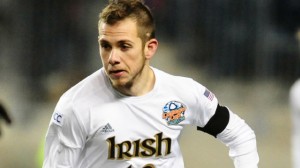 As the yearly, semi-lottery that is the MLS SuperDraft looms ever closer (January 16th) with college players desperate to impress potential new coaches and managers, there is one college product who, on January 9th, already penned a Homegrown deal to join Chicago Fire – Harrison Shipp.

Fire Head Coach Frank Yallop has already labelled Shipp as ‘one of the best college guys in the country’. When you look at the stats, you would struggle to reason not to agree with the newly appointed manager. Twelve goals and ten assists in his senior year in just 24 appearances alongside picking up 2013 ACC offensive player of the year and all-time ACC First Team honours all add to his growing list of credentials.

Yet in 2012, Shipp did not start a match as MLS 2013 rookie of the year Dillon Powers and Columbus’ Ryan Finley grabbed the headlines for the Fighting Irish. The Mac Hermann Trophy finalist (the highest intercollegiate award), has become more productive in his four years playing for Notre Dame, going from scoring no goals in 2010, up to five, then six, then 12 in 2013. His assist level has also marginally improved (six, two, six, and ten) as he grows in to a more complete player.

A more complete player is the key phrase here. In MLS, you will only go so far by what you do in an offensive sense. Freddy Adu of course being the prime example of a highly rated youngster in MLS who played in behind the striker, but has struggled to progress to the level that was expected of him with his main weakness being his seeming unwillingness to track back and help his team-mates when in trouble. Shipp will have inevitably created a good first impression in his press conference, stating with great maturity how he has been working on becoming a more versatile player.

That’s why I wanted to make a point, in the last couple of years in college, of becoming versatile, learning how to defend, learning how to play out wide, and just using my assets as a soccer player in order to kind of increase the number of possible positions I can play, which will increase my chances of getting on the field as a rookie or second-year player.

There is no other league in professional football which links college/university so closely that nation’s particular domestic league. The majority of ‘youth’ in MLS start at around the age of 21-23 after graduating, unlike in Europe where the best young players start to break through into the first team as 17-18 year-olds. There is little room for a player to find their feet and given time to improve the basics of their game. Chicago Fire will undoubtedly have a gruelling 2014 schedule, all squad members will have to be used some point in the season. Shipp will want to be in the starting XI on March 9th against Chivas USA and, as the season progresses, may have to fulfil more than one role in his rookie season with competition from the likes of experienced heads Chris Rolfe and Alex for the no. 10 position.

This isn’t to say that Shipp cannot take on the role for himself though. There is a reason for why Shipp is already the league’s hottest prospect in 2014. At collegiate level, Shipp showed his ability to combine his sheer physicality with superior technical ability, sinuous movements, prodigious killer-passes and of course, a good eye for goal. Shipp was able to shine on a national level after successfully spearheading Notre Dame into the College Cup where his quality could be judged by those who tuned in to ESPNU. Notre Dame won their first ever National Championship, with Shipp getting three assists for the four goals that they scored. Expectation is something that the young American is clearly capable of handling.

Chris Rolfe and Alex both endured relatively mediocre seasons in 2013. Rolfe scored 4 with 1 assist in 31 appearances while Alex scored 1 and assisted 1 in 30 appearances (although he did play a more withdrawn holding role for most of the season). Even if Shipp records half his goal and assist tally from his 2013 College season, then the 2014 rookie could quickly rise to become one of Chicago’s most valuable commodities. Chicago Fire fans are already drawling at the potential – yet very realistic – possibility of a Magee – Shipp partnership, one which may be able to elevate the Fire into the play-offs after coming so close last year.

From Major League Soccer’s perspective, any success that Shipp has would have an inevitable knock-on effect on the league. A young, technically-gifted American soccer player who has not only gone through the college system but also through Chicago’s academy system, playing for the Premier Development League (PDL) side in 2010 up to 2013 and Super-20 teams. Shipp would undoubtedly become a poster-boy for the league. While – at the same time – silencing those who criticise MLS’ allegiance with the NCAA for being the main source for producing USA’s professional footballers. Shipp could also become one of the first, most successful players to have signed a Homegrown contract.

But let’s not go overboard. Shipp has yet to play a minute professionally and will need to make the conventional transition from college to pro level as smoothly as possible. It’s hard not to get excited though.  Shipp has shown himself to be an excellent talent at college level and has the undoubted potential to thrive at his hometown club.

2 thoughts on “Is Harry Shipp the real deal?”