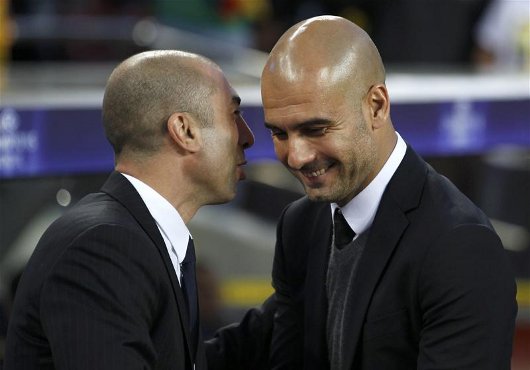 So, another Chelsea manager starts their time in charge with the shadow of Pep Guardiola looming large on the horizon. Fellow Spaniard Rafael Benitez all too aware that every dropped point will be accompanied by discussion about the apparent inevitability of Guardiola’s eventual arrival at Stamford Bridge…it just goes with the highly paid territory.

Is it realistic though for the former Barcelona Head Coach to be held-up as a magical cure to all of Chelsea’s managerial ills? It may sound ridiculous to some, but assessing his suitability for the role requires Roman Abramovich to look far beyond Guardiola’s fantastic record with arguably the greatest club side we’ve ever seen. Two Champions League titles and three domestic league titles among a total of fourteen major honours in four years, and all of this done playing a style of football admired almost universally.

Guardiola achieved the managerial ‘Holy Grail’, namely ‘winning football’ that’s also pleasing on the eye – exactly what Roberto Di Matteo was in the embryonic stages of trying to do at Chelsea, before his tenure was ended after eight months and two major trophies.

Di Matteo was arguably ahead of schedule in his attempts to reshape and redefine Chelsea’s style of play, as apparently desired by Roman Abramovich. What surprises me is the commonly held view that Guardiola’s track record at Barcelona means he’s likely to achieve this quicker than most. It’s a theory that seems to ignore or gloss over some potential drawbacks in Chelsea appointing Guardiola.

For all the silverware he amassed in Spain and his undoubted talent, Guardiola would discover situations and challenges at Stamford Bridge that would be alien to a coach who has spent his entire managerial career in Barcelona.

Chelsea are owned and run by a billionaire, Barca is held up as a model of supporter ownership, famed for a youth academy that furnished Guardiola with the likes of Xavi, Iniesta and Messi – players schooled in the footballing principles of La Masia, just as Guardiola was himself.

Chelsea have invested heavily in their own academy, which is now producing potential gems like Lucas Piazon, Nathaniel Chalobah and Islam Feruz, but restraints of time mean it’s values and principles are nowhere near as entrenched as Barca’s youth system, where a football philosophy has been passed down through many generations.

It is one example of how managing Chelsea would require Guardiola to show a lot of versatility and adaptability, areas in which he’s yet to be fully tested during a five-year coaching career spent exclusively in Barcelona.

It’s impossible for anyone to say with certainty whether he would or wouldn’t thrive at Stamford Bridge but appointing a senior manager in any profession is surely about minimising risk and appointing the person whose skill set is best suited to achieving the company’s objectives.

Guardiola appears to fit the well-documented brief perfectly after achieving incredible success while playing attractive football, but it’s surely short-sighted to presume this can be easily replicated at a very different club in a very different country, particularly with a coach who, for all his success, is still in the early stages of what we hope will be a lengthy career.

Indeed, to be considered a great football manager you surely have to achieve longevity, preferably with variety, something I’d associate with the likes of Jose Mourinho, Fabio Capello and Louis van Gaal, but not Pep Guardiola just yet.

Sir Alex Ferguson’s won more trophies than any of them at Manchester United, but he also won a league title with St Mirren before domestic and European honours with Aberdeen, not to mention a brief spell in charge of the Scottish national side, all prior to his arrival at Old Trafford in 1986.

Pep Guardiola’s undoubtedly shown qualities that suggest he may well go on to achieve a similar sort of managerial longevity, but at this stage of his career the Chelsea job would be a huge risk, both for Guardiola and the man said to so admire him, Roman Abramovich.

Many say the current incumbent at Stamford Bridge, Rafael Benitez, is merely keeping the seat warm ahead of Guardiola’s expected arrival at Stamford Bridge next summer – the title of ‘interim manager’ lends weight to that theory, but right now the older of the two Spaniards is surely far better qualified to deliver success for Chelsea.