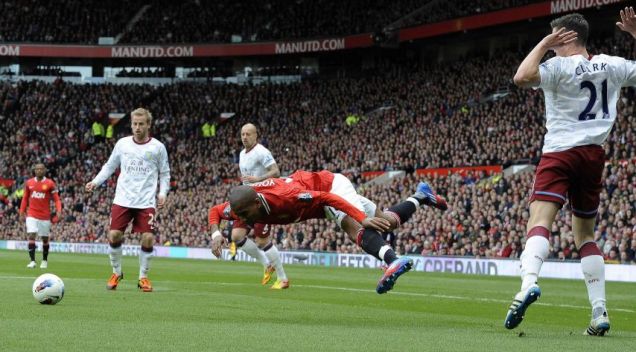 An incident occurred last Tuesday night as Manchester United were playing in Spain away to Real Sociedad in the Champions league. Ashley Young seems to have lost his way recently, constantly being out of the team with his loss of form, not helped by the rising star in Adnan Januzaj. However it isn’t his loss of form which is the centre of attention once again, it’s his diving.

Over recent years diving has really come into the English game, there was a time when you could never imagine a player diving; now it’s just part of the game. It is almost enough to put you off football. El Clásico is supposed to be the pinnacle of the game, everybody wants to watch it. However in recent years I have been put off, diving in the Spanish league is even worse than in the Premier league, it’s almost unbelievable!   Some players are blessed with footballing talent and they ruin it by diving. You’ll see a player do some step overs, go past his man and then kick his leg into the defender, fooling the referee into believing that they have been fouled. A good example of this being, the next big thing, Neymar.

As good as he undoubtedly is, he dives too much it seems. There really is no need for a player of such quality to go to ground so easily. He already had a reputation for this in Brazil before he came to Spain but it doesn’t look like he’s changed his ways. Many people have already picked up on this, be it players or managers. Valladolid coach Juan Ignacio Martinez was one of the first to voice his concern, stating  “Neymar has a defect, but I am not going to say what that is, everyone knows what it is.” Yes, I think we know too. The worst thing is in the Spanish league especially now, you get big solid players diving and play acting. Sergio Busquets and Carles Puyol who are both great players, dive! These are the sort of people you wouldn’t mess with. However maybe now, people will.

Ashley Young, without doubt is the worst Englishman when it comes to diving. We’ve seen him throw himself to the ground many times, it makes you cringe.  On Tuesday night Ashley Young had done well, he’d gone past a man and got into the box.  The midfielder, Markel Bergara brushed his arm against Young; only to see him perform a swan dive into the air. Of course, he won the penalty, much to the dismay of the Sociedad team and everybody watching. Thankfully this did not win them the game as Robin Van Persie missed the penalty, karma, maybe?

I must say though, I think the past couple of years there has been a bit less diving in England and the referees seem to have done a good job spotting the cheats. I really just hope it goes no further, I honestly cannot stand it, it makes the blood boil. Some people may feel I am being too harsh when I call him a cheat, but he is. Tricking the referee into giving his team a penalty, sometimes even getting the player sent off. It may seem like I hate Ashley Young, yet when he was at Aston Villa I thought he was a great player and he just worsened as he got older. I believe the diving has ruined him as a player, he’s lost a bit of his raw talent; he also now has a reputation and the referees will punish him even if he’s done no wrong.

Don’t get me wrong, other English players do dive but none to the level of Young. I personally would like to see players caught diving to the extent of it being obvious to everyone; they should be banned for a game. This would quickly sort the issue out. So, what are your votes on diving? Be sure to let us know in the comments section below.

4 thoughts on “Is diving ruining the game?”