For as long as we can remember, Irish footballer supporters have had a special affinity for the clubs across the water in the UK.

While it is commonplace to see a fan on these shores sporting the jersey of Celtic, Liverpool, Manchester United and other world-famous and traditionally successful clubs, it’s rare to see a fan shouting for one of the UK or Europe’s lesser lights. 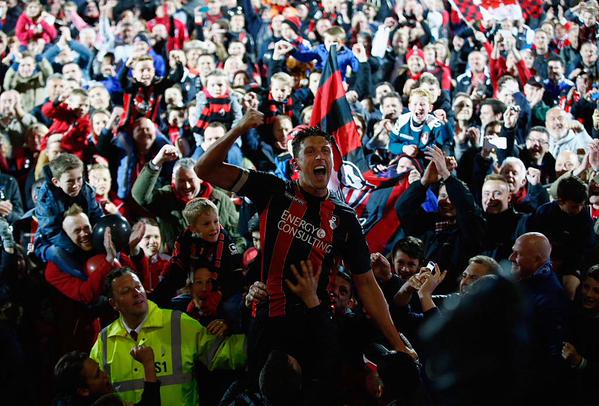 In the first of a new series on Irish supporters’ clubs of lesser-known clubs, we feature an interview with Ed Taylor, head of the AFC Bournemouth Irish Fan Club based in Navan. Ed is a primary school teacher and has been living in Ireland since 2007.

Here’s what he had to say on how he set the club up, his Cherries heroes, and hopes for the future:

Back Page Football: We’ll start with a brief history of the AFC Bournemouth Irish Supporters Club. When was it founded and what was the motivation?

Ed Taylor: It started in  2010, in Navan. Jim Hannah’s pub in the town has a large Leeds United following.

I had lived in Navan for a couple of years and after much ridicule of AFC Bournemouth, predominantly at the hands of Leeds supporters, myself and another lad from Poole, Dorset said ‘right we’re both from Dorset’, so we began recruiting a few of our neutral mates, including the landlord Jim. Since utilising Facebook, we’ve grown but not rapidly.

The Leeds supporters, or the ‘Navan Whites’ as they’re called took the mickey saying ” why don’t you have a club of one, telephone box meetings etc.”. But quality as opposed to quantity is the key to AFC Bournemouth. Our meteoric rise has now seen us pass Leeds by.

BPF: Have the membership figures always been relatively consistent? How many members have you got at present and has it increased since The Cherries have hit the big time?

ET: We’re only tiny and have 25 members. Roughly 60% English, but the Irish contingent is growing and most would have a connection to Bournemouth either through college, work or family.

BPF: Are there trips offered to cheer on the boys at Dean Court?

ET: Yes, but unfortunately AFC Bournemouth do not have affiliated supporters clubs so there is no special right to tickets. You need to have enough home points to get tickets and because the stadium is so small, (it has a capacity of 11,500) it is difficult to meet the criteria when you live in Ireland.

However, away games are the best option. We went to several the last few seasons, but only this season are we trying to get more organised due to the points criteria. We’ve been to Anfield, West Ham, Stoke and Manchester City already this season.

BPF: When you can’t make it across the water, where would an Irish Cherry go to watch a game with his Boscombe brethren?

ET: This is a new phenomena having ready access to live streams. We could do with a Dublin home but nothing is up and running yet. As AFC Bournemouth are tiny it doesn’t seem to quite get the pull of the landlords, but hopefully something will turn up.

The Auld Stand in Ratoath is one venue and some witnessed our ascent to the Premier League there. They’ve got Bournemouth paraphernalia on the walls. We also gather in Jim Hannah’s in Navan. We’re very much a diaspora without a solid place to watch games. It doesn’t help that our supporters are scattered in the four provinces. 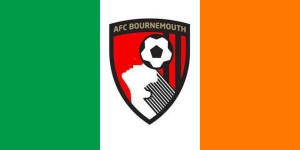 BPF: Any Irish heroes down the years or at present?

ET: Tommy Godwin, a goalkeeper, was in the Ireland team that became the first non-UK team to beat England. That was in 1949. Gerry Peyton, another goalkeeper and Bournemouth stalwart. Garreth O’Connor, now working in the family butchers in Dublin. Right now there’s Harry Arter, a brilliant player signed for £4000 from Woking and now an Ireland player.

Eunan O’Kane is really shining in the Premier League. An unsung hero, but plaudits are beginning to come his way. And from Northern Ireland, there’s Colin Clarke who scored against Spain in the 1986 World Cup while playing for Bournemouth.

BPF: Who would you regard as a cult hero at the club?

ET: Easy. Big Steve Fletcher, the warhorse who has made more appearances for us than anyone else. He came back to Bournemouth and scored the goal that saved us from dropping into the Conference and, most likely, liquidation. He has a stand named after him and is currently head of UK player recruitment.

Obviously Eddie Howe has God-like status. It is impossible to overstate his mercurial ways and if we never got another point he would and always will be revered in the town.

ET: Most gifted would have to be George Best, but by the time he came to Bournemouth it was just for beer money. However, he was an icon that filled the stands for the few games he appeared in and could be bothered to turn up for.

Of the current first team Matt Ritchie and Harry Arter. This is our time, so it would have to be current players as we’ve never had any real success. Despite having decent players we have always had to sell them on for peanuts to pay the bills.

Now we’ve got financial backing we don’t get stripped of our assets and this has allowed Eddie Howe to build a team.

ET: Leeds United, due to their ‘fans’ rioting in Bournemouth in 1990. Some Bournemouth fans dislike Southampton, but this is mostly towards the attitude of the ‘traitors’ that should support us as they live in the area but have taken delight in tormenting us due to our historically low football league position.

ET: Andrew Surman. Tireless, modest, the cog that links the team. Now we are in the Premier League, people will take notice due to the plethora of Opta Stats etc. Surman seldom gives the ball away with his accurate passing and gets plenty of touches.

BPF: Finally, what are hopes for The Cherries for the remainder of the season?

ET: Survival. Although at the outset of the season I placed a bet on top ten finish, that might have been the heart ruling the head. I also placed a more outrageous bet on us to qualify for the Champions League, but that will be framed and put on the mantelpiece.