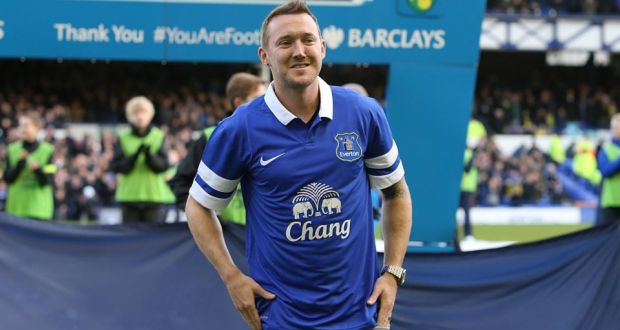 At first, there may seem a precedent.

Surprisingly, to some, it is not the lauded Irish contingents who turned out for Celtic, Liverpool and Manchester United in that glory era between 1988 and 1990.

Rather, ahead of the 1994 World Cup, four members of the Irish first XI were at Aston Villa.

Paul McGrath, Andy Townsend, Steve Staunton and Ray Houghton started each of Ireland’s games at that tournament in the US.

Two years later, Brian Little’s Villa would go on to challenge for the title in 1995-96 and retained the League Cup in the same campaign.

It remains Villa’s most successful recent season, and McGrath, Townsend and Staunton were ever presents.

The 34-year-old Houghton had departed for Crystal Palace in the previous summer, though, and the same fate would befall McGrath (36) and Townsend (33), who would leave Villa in 1996 and 1997 respectively.

In contrast, Everton’s Irish contingent are entering the peak of their careers – as opposed to the twilight.

Only England are the better represented nationality in Roberto Martínez’s squad, with Shane Duffy (22) also registered.

In fact, only Tim Howard and have played more games than Séamus Coleman and James McCarthy.

Clearly, McCarthy (23), Coleman (25) Darron Gibson (26) and Aiden McGeady (27) are going to play crucial roles in Everton’s hopes of breaking into the top four under the shrewd stewardship of Martinez in the coming years.

With Gibson to come back from a lengthy injury and McGeady soon to make his debut, Coleman and McCarthy have set the pace: making a combined 41 appearances this season.

Coleman leads the way in the individual charts, having appeared in every one of Everton’s game this season.

Equally, it is worth noting that McCarthy missed the first four games of Everton’s season while his £13 million move from Everton was being completed, and has played in each of the 19 since.

Both have been in imperious form; however, cynics would argue that if this is the case in the coming seasons, then, Everton would struggle to hang on this influential spine.

Of course, the argument can be made that the likes of Joleon Lescott, Mikel Arteta and Marouane Fellaini all departed Everton for pastures new in recent seasons.

They, like the Irish contingent, were brought in without, initial, interest from the Premier League’s traditional powerhouses before they went on to depart Goodison Park for marked profit.

However, Martínez is building something incredibly exciting at Everton and, already, has overseen Coleman and McCarthy’s performances rising to new levels.

Coleman, arguably the league’s most impressive right back this season, has finally been given license to roam forward after David Moyes’ reactive tactics in the Sligoman’s previous four seasons.

The one-time winger has become an explosive, yet equally dependable, presence for Everton, with five goals already this season.

Meanwhile, McCarthy – who has often been criticised for his meekness and ‘lack’ of presence – has formed a reliable partnership with Gareth Barry.

Barry, soon to turn 33, has played in the Premier League for 16 years; never, either for Hamilton, Wigan or Ireland, has McCarthy had that kind of a reassuring presence and communicator beside him in midfield.

With Barry out of contact at Manchester City in the summer, it seems inevitable that this partnership will continue next season.

What that means for Gibson remains to be seen and the Derryman, along with McGeady, will have a difficult job to dislodge Barry and Steve Pienaar respectively in the coming months.

It will require Gibson and McGeady following in McCarthy and Coleman’s footsteps in performing at personal highs for their clubs.

A welcomed way to start the New Year for Martin O’Neill.