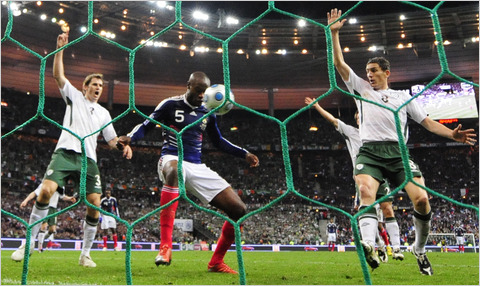 It took extra time to seperate Ireland and France in their World Cup playoff after a 1-1 aggregate score. The French went into the second leg as firm favourites having won 1-0 in Dublin on Saturday, but it was Ireland who attacked from the off and looked the much better side.

Having created some good early chances, they were finally rewarded with the lead on 33 minutes. Some neat interplay down the left between Kevin Kilbane and Damien Duff saw the latter pull a cross back from the byline to the penalty spot where Robbie Keane was on hand to score his 41st international goal.

The 15,000 travelling supporters were in great voice throughout, and their team should have gone further ahead in the second half. A superb Liam Lawrence through ball set Duff free but his tame effort was straight at French goalkeeper Hugo Lloris. Keane also squandered a chance to claim his second as he took a heavy touch when attempting to go around Lloris.

France were lacklustre throughout and rarely troubled Shay Given in the Irish goal, though they did have a shout for a penalty when Nicolas Anelka went down under the keeper’s challenge in the area.

With the tie level after 90 minutes, the game moved into extra time and again it was Ireland looking the brighter of the two sides. However, it was the hosts who took the lead in controversial circumstances.

A Florent Malouda free kick dropped to Thierry Henry close to the byline and his flick across the box was turned into the net by William Gallas. Replays clearly showed the French skipper using his hand to control the ball in the area, but the protests of the Irish players were waved away by referee Martin Hansson.

Henry later admitted to using his hand in the build up to the goal, but it will be of little consolation to the heart broken Irish players.

“I played it. The ref allowed it. That’s a question you should ask him.”

Ireland captain Robbie Keane was understandably annoyed at the decision.

“He almost caught it and walked into the net with it,” he said.

“When you see the reaction of Shay (Given), he’s two yards away from it. You don’t get a reaction like that (otherwise).

“He’s an absolutely top player and has been for a long time, but it was a clear hand ball. He actually dragged it in from going out. I wouldn’t expect it from anybody.” 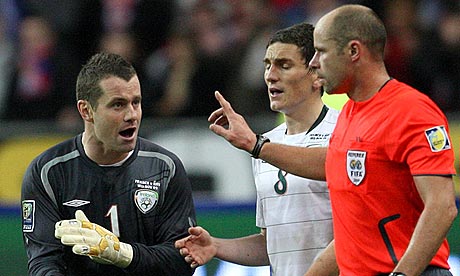 In the other European playoffs, Slovenia caused a shock by overcoming Russia on away goals. Down 2-1 from the first leg but with a vital away goal, a Zlatan Dedic strike just on half time was enough to see them through at the Gradski Vrt stadium in Maribor.

Portugal and Greece also won 1-0 on the night against Bosnia and Ukraine respectively to reach the finals.

Algeria became the final African side to qualify after they beat Egypt by a single goal, and a 1-1 draw was enough for Uruguay to see off Costa Rica 2-1 on aggregate in the last of the playoffs played overnight.