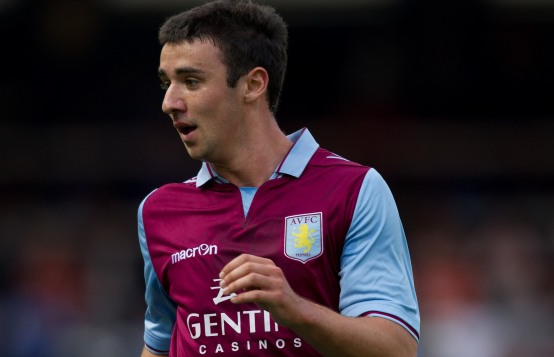 It would have been cynical to let Enda Stevens fall into the Bad Weekend category.  Defeat in a match whereby your side held a two-goal cushion only to let it slip away.  On top of that you openly admit the third and winning goal by Javier Hernandez is your fault.  So why a good weekend?

A first Premiership start against the league leaders for a 21 year old from Dublin seems a reasonable argument.

Stevens has been edging his way into Paul Lambert’s Aston Villa side this season.  Two league cup appearances were followed by last weekends substitute appearance against Sunderland where he replaced the injured Eric Lichaj.  With Lichaj still injured Stevens was granted the opportunity to play alongside fellow Irishmen Ciaran Clark and Stephen Ireland in Saturday evenings match with Manchester United.

It’s not unreasonable to state Stevens had the strongest performance of Villa’s back four, but his role in Chicarito’s winner took the gloss off a tidy display.  And Steven’s was not slow to shoulder the blame.

It was my fault for the third goal.  I am devastated that I lost his run and let him slip ahead of me.  To play at this level you have to be faultless for 90 minutes.  I switched off.  I am gutted that I conceded a goal.

A harsh lesson for the Cherry Orchard graduate who rose to prominence in Shamrock Rover’s title winning sides of 2010 and 2011 and adjoining sojourns in Europe.

But from such lessons experience is gained and Stevens will be hopeful to retain his place after the international break when Villa travel to Manchester City on Saturday.  Baptisms of fire don’t come much hotter then this.

Repressed memories of Cyprus must have resurfaced at some stage on Saturday for Paddy Kenny as he conceded six goals in Leeds Uniteds home defeat to Watford.  Kenny’s confidence will be shaken by a litany of accurate strikes from Gianfranco Zola’s men who scored from over half their shots on Kenny’s goal.

Consolation?  Two of the goal scorers for Watford where Irishmen.  27-year-old Tallaght man Mark Yeates scored an excellent 25-yard free kick.  Ireland under21 midfielder Sean Murray also scored with a fine strike from 25 yards to further deflate their compatriot in the Leeds goal.

Shay Given yet again had to play understudy to United States keeper Brad Guzan from Illinois.  Given’s decline, while not dramatic is disappointing and this week he has voiced his wish to move out on loan to gain first team experience.  If that move does transpire it might not mean a move from the Premiership but it is quite likely this could well be the case.

After bigging him and his side, Barnet, up, in Friday’s column, Graham Stack got tainted with the Irish Abroad curse and conceded four in his sides League 2 visit to Morecambe.  Morecambe’s win pulls them further away from the relegation battle that Stack and his teammates are now truly cemented in alongside Aldershot and Gary Doherty’s Wycombe Wanderers.  All three teams are on 13 points.

Friday night sees Barnet welcome Accrington Stanley and a side that should feature Irish under21 defender Michael Liddle and more ominously for Stack a front line that will include Carlow’s Pádraig Amond.  Amond is currently the Irish top scorer in England and Scotland with seven goals.