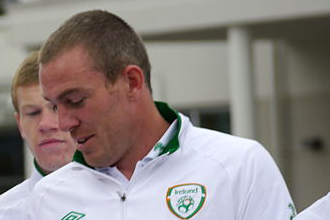 The phrase “six-pointer” is one which is oft overused in modern football parlance.

Any time a big game between two sides who are close together in a league table takes place, it is always hailed as a “six pointer”. This Friday, the Republic of Ireland play Sweden in Dublin and it’s one of those rare situations for which the term “six pointer” could have been invented.

The winner becomes the firm favourite to finish second in World Cup qualifying Group C – and with it secure a qualification play-off berth – the loser is almost certainly out of the running for qualification. A draw would decide very little though it would leave the Swedes favourites for second place thanks to their amazing 4-4 draw with Germany earlier in the campaign and the fact that the Irish have a much inferior record against Die Mannschaft. Austria have of course already beaten Sweden, so any result apart from a win for the Boys in Green against the Scandinavians would leave the chances of making it to Brazil next summer very slim indeed.

Pivotal to Irish hopes of attaining a positive result in Dublin will surely be keeping Sweden’s talismanic striker Zlatan Ibrahimović quiet and much of that responsibility will be handed to Richard Dunne at the heart of the Irish defence. Following a year out through injury immediately after the ill fated Euro 2012 campaign, Dunne completed his third game of this fledgling Championship season and was as ever, a rock at the heart of the Queens Park Rangers defence over the weekend. On Saturday The Hoops beat Leeds United 1-0 at Elland Road with Dunne coming through the 90 minutes unscathed. Having left Aston Villa at the end of last season, Dunne has dropped down a division to play with newly relegated QPR, but he is still capable of doing a job at international level.

The goalkeeping position is a tight call between Keiren Westwood of Sunderland and Millwall’s David Forde. Westwood had been out of favour at the Stadium of Light but has come back into the starting line-up from the start of this season following the departure of Simon Mignolet. Westwood conceded three in a 3-1 defeat to Crystal Palace while Forde, who is returning from injury looked solid in a 1-1 draw at Brighton. The fact Westwood is playing in the Premier League could mean that he just about shades it for the starting berth between the sticks.

In defence; Richard Dunne is certain to start following a comfortable, assured display against Leeds where he as ever, kept things organised and order at the back. Partnering him in the centre of defence is likely to be John O’Shea who was caught out badly when giving away a penalty – and a red card (with the score at 1-1) – which played a big part in Crystal Palace earning their first points of the season with a 3-1 triumph over the Black Cats on Saturday. With 90 caps O’Shea is a mainstay at the back for Ireland now and he is sure to start against Sweden.

At right back, Everton’s Séamus Coleman played the full 90 minutes as The Toffees drew 0-0 at Cardiff. The 24 year-old Donegal man was his usual effervescent self, bombing up and down the flank and he is at last becoming a regular in this Irish team. A sure and deserved starter at full-back. The opposite defensive flank is likely to be a two way battle between Marc Wilson and Ciaran Clark but trying to read who Trapattoni will pick when it’s a close call is always difficult, though I would plump for Clark.

In midfield, Wigan’s James McCarthy and Stoke’s Glenn Whelan are regular performers at their clubs and look likely to take the central midfield berth (though Wilson could also come into the midfield if a 4-3-3/4-5-1 formation is chosen). Leeds United’s Paul Green is a favourite of Trapattoni’s. Green did well in a holding midfield role in Stockholm back in March, though one imagines Trapattoni will go for a more attack minded line-up on Friday night.

On the left flank (or part of a 4-3-3/4-5-1 formation), Robbie Brady should start. He hasn’t looked out of place whilst playing in the Premier League for Hull City in the embryonic stages of this Premier League season and the Dubliner scored the only goal of the game from the penalty spot as The Tigers beat Norwich last weekend. On the wing, or up top, there should be a place for the combative Jonathan Walters. His physical presence could be just what Ireland need against a robust Swedish defence.

Shane Long should also start either up front or in a deep lying attacking role. A Premier League regular in good form with West Brom, his tireless running is just what Ireland need and his battle with club colleague Jonas Olsson could be one of the most important of Friday night’s individual tussles. The nation’s record caps holder and goals scorer, Robbie Keane will, barring injury, lead the line. In fairness to the Tallaght man, he has been in good form with LA Galaxy in MLS. Keane in fact scored twice and contributed an assist in a 3-0 win for the Galaxy over the San Jose Earthquakes on Saturday in what was a man of the match performance for the 33 year-old.