A little over two weeks ago Pablo Aimar retired, a decision that attracted little comment in this part of the world. The former Valencia, Benfica and Argentina star had been trying to regain fitness at Buenos Aires giants River Plate, the club where he first made his name, but had been hampered by ongoing injury problems and had only made a single substitute appearance for Los Millonarios.

In his first spell there Diego Maradona was moved to declare that “Pablo is the only current footballer I’d pay to watch” and described Aimar as the “best player in Argentina over the last couple of years and is even more talented than Riquelme or Saviola”. 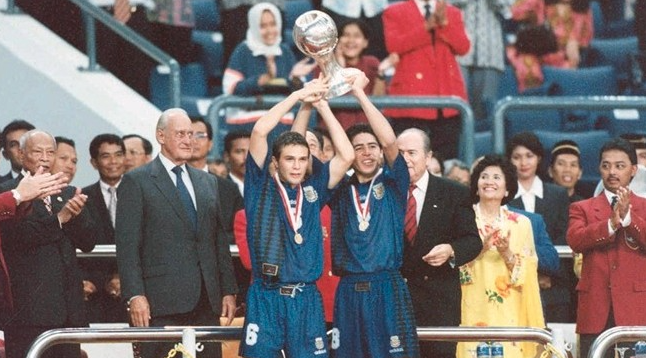 Only slightly taller than El Diego and blessed with a similar array of skills, it wasn’t long before Aimar was given the dreaded “next Maradona” tag ahead of his move to Spain with Valencia. With his slight frame, graceful balletic touch and outrageous trickery, it’s easy to see why a current Argentine star like Lionel Messi had idolised Aimar as a youngster, and claimed that he was one of the players he looked up to.

Aimar falls into the category of great Argentine players who have come to retirement having never won a senior international trophy, a gifted generation that saw the overlapping talents of Juan Sebastian Veron, Hernan Crespo, Juan Roman Riquelme, and many others who have left the game without a World Cup or Copa America to their names.

But 18 years ago it looked like things would be much different, because in Malaysia in the summer of 1997, Argentina had just won the FIFA World Youth Championships, a tournament I had watched with rapt attention, not just because of the talents of Pablo Aimar, but because the team they beat in the semi-finals, en route to ultimate victory, was Ireland.

1997 was a strange time to be an Irish football fan. As a teenage supporter I had grown up in an era of success and expectation based on the successful qualifying campaigns for Euro ’88 and the World Cups of 1990 and ’94. However the qualifiers for Euro 1996 had changed a great deal of that expectation into a climate of trepidation, and although results had been initially encouraging, things quickly went downhill with Ireland managing only a 0-0 draw away to Liechtenstein and then losing 3-1 to Austria in Dublin.

This meant that Ireland needed a playoff victory against a youthful Dutch side, full of Ajax players who had just won the Champions League, to progress to England. A two-nil defeat courtesy of a pair of Patrick Kluivert goals ensured the end of the Jack Charlton era, and for the first time in a decade, the Irish national team had to face into a period of uncertainty with their talismanic manager gone and a core group of players edging towards retirement.

But fast forward a year later and what appeared upon the horizon only Brian Kerr and Noel O’Reilly leading their bunch of impressive young players to Malaysia and the FIFA World Youth Championships. There was at least a hint of promise that the generation of McGrath, Moran, Houghton and Aldridge could and would be replaced by young players of quality.

The team that went to Malaysia could have been even stronger but for the fact that the new senior team manager Mick McCarthy chose to stop Ian Harte and David Connolly from travelling. Both players had made their senior debuts the year before and McCarthy wanted them to rest and focus on establishing themselves at their clubs ahead of the new season.

Similarly Everton’s young defender Richard Dunne was unavailable due to injury. The difference between 1997 and the footballing landscape today is noticeable; Connolly was about to move to Dutch giants Feyenoord, while Dunne and Harte were establishing themselves as teenagers in Premier League sides.

The Irish were in a tough group with Ghana, China and the USA with no match being decided by more than a single goal. Things didn’t get off to a great start with Ireland going down 2-1 to Ghana in the opening game although Trevor Molloy, then of Athlone Town got his first goal of the tournament. A 2-1 over the United States and a 1-1 draw with China followed, with Micky Cummins then of Middlesboro getting on the scoresheet in both games, enough to secure the second qualifying spot in the group. 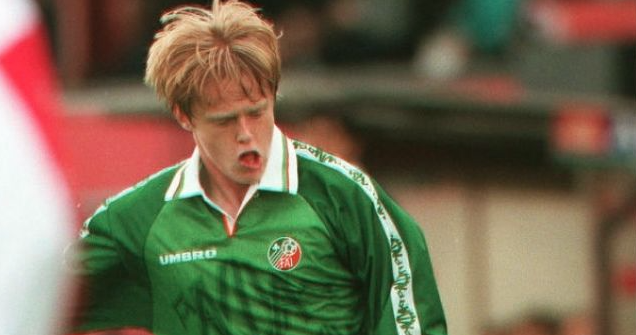 Next up was the round of 16 match against Morocco who had also finished second in their group behind eventual finalists Uruguay. Ireland opened the scoring with a goal from Neale Fenn before Morocco equalised through a Niall Inman own goal. The game went to extra time before being eventually decided by 97th minute Damien Duff strike to set up a quarter final meeting with Spain.

The Spanish have tended to be the European masters at the various underage level and their under 20 side contained the likes of David Albelda and Gerard Lopez, and while the Irish rode their luck in the game, they ultimately emerged victorious, that man Molloy on the scoresheet again scoring with a second half penalty, his third goal of the tournament.

This side had now progressed further than any other Irish side ever had in a tournament, to the semi-finals against Argentina. Prior to the Spanish game Kerr had rallied his young charges with that very thought:

Just think, you guys may never again get the chance to play against Argentina, even if you all go on to become senior internationals. The senior World Cup comes around only every four years so think of how many opportunities you will have to meet Argentina during your career.

Kerr’s rousing words had the desired effect against Spain and Ireland would now face a side containing the likes of Walter Samuel, Juan Roman Riquelme, Esteban Cambiasso, Diego Plancente and Pablo Aimar. The Argentines had already dispatched an English side containing the likes of Danny Murphy, Michael Owen, Jamie Carragher and Kieron Dyer, with goals from Riquelme and Aimar sending Ted Powell’s side home and next knocked out the free-scoring Brazilians who themselves had smashed ten past a hapless Belgian side in the round of 16.

In what was a tight game, a somewhat nervous and fatigued Irish side succumbed to a Bernardo Romeo strike early in the second half. Six games in 15 days in the heat and humidity of Malaysia had taken its toll, and while there was a late Irish rally and a missed chance by Glen Crowe in the closing minutes the Argentines were the deserved winners.

They would defeat Uruguay 2-1 in the final three days later, while Ireland, the last European side left in the tournament, would take the bronze medal, with goals from Dessie Baker and Damien Duff securing a 2-1 win over Ghana and revenge for their opening day defeat.

Watching this all unfold in an apartment in Gran Canaria I was convinced I was watching the future of Irish football in action, I indulged in those misguided games of what-iffery that occasionally fill newspaper column inches, trying to picture an Irish Senior XI in 5 years’ time. This is the type of thing that comes back to haunt you when you predict that Neil Mellor will help England’s win Euro 2008. But it seemed inconceivable at the time that players from that squad wouldn’t make the next step. 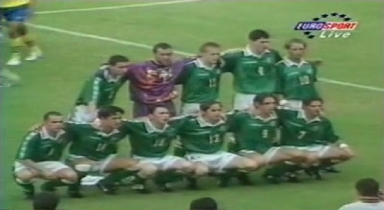 Damien Duff, the youngest player in the squad was a bona fide star and already looked the finished article, he even drew favourable comparisons from various media outlets with a certain Liam Brady. I was convinced that Derek O’Connor would provide competition for the No. 1 jersey with a youthful Shay Given, that Robbie Ryan could surely be the next Denis Irwin, Colin Hawkins would provide competition and physicality at centre half while the composed captain; Thomas Morgan would help protect the back four alongside Roy Keane in the senior team. And surely the top scorer, Trevor Molloy, released by Shamrock Rovers only six months earlier, was only weeks away from a move cross channel?

Of course things don’t work like that. Liam Tuohy’s side that got to the 1985 Youth Championships didn’t contain a single player who would win a senior cap and Kerr’s squad didn’t fare much better. Although Duff would win a century of caps for Ireland, the only other team member who would be capped at senior level was Glen Crowe, winning two caps during his first spell with Bohemians. The one other player to win a senior cap for Ireland from that tournament was Jon Macken, then part of the England squad, who would switch his allegiance to Ireland and won a single cap in 2004.

Perhaps these under-age tournaments are always disappointments when viewed retrospectively. Pablo Aimar, voted as one of the players of the tournament and dubbed as one of many new Maradona’s, has been viewed, for all his skill, flair and finesse as an example of unfulfilled potential. Despite two La Liga titles, a Portuguese League title and a UEFA Cup win, there is a sense that he could have achieved more.

While Duff won a hundred caps for Ireland, played at a World Cup and a European Championship and won two Premier League titles with Chelsea, could or should some of his team mates achieved similar success? Players like Fenn, Crowe, Morgan, Hawkins, Dessie Baker and Trevor Molloy had successful careers in the League of Ireland, Robbie Ryan and David Worrell had solid careers in England, but others, such as goalkeeper Derek O’Connor had drifted out of league football within a year.

Part of the joy of such tournaments is the glimpse they give of a potential that has yet to be fulfilled, the glimpse of infinite footballing possibilities, the moment watching the emergence of a small, slightly built Argentine playmaker and knowing he may never be Maradona but suspecting that maybe, just maybe, he could be. It’s the joy of seeing an 18-year-old Damien Duff playing uninhibited street football and skinning full backs with chalk on his boots.

Just think of Burt Lancaster’s Moonlight Graham or Kevin Costner as Crash Davis in Bull Durham, minor league players who fleetingly tasted ‘success’ even if that success lasted just a single inning in the Majors. For all my naivety as a 15-year-old watching a group of young men, three and four years my senior, I hoped that they would populate our next great international side.

To finish on another film reference, I’m brought to mind of what Joey ‘the Lips’ Fagan says at the end of The Commitments when imagining a different future for the band, one of success and record contracts – “Where’s the romance in that?”.