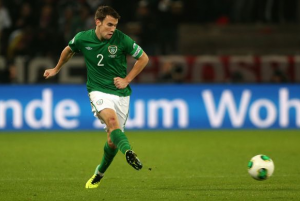 The Republic of Ireland face familiar foes on the road to France 2016, with Germany, Poland, Georgia and Scotland providing stern opposition for Martin O’Neill’s men.

The Green Army’s first outing is a tricky away tie against Georgia on September 7th, previous opponents in two failed qualifying campaigns, Portugal 2004 and South Africa 2010. Ireland secured victory on each occasion, eking out vital away wins on a 2-1 score line.

Although better equipped to deal with Georgia’s potent attacking threat, the O’Neill-Keane alliance may find its resolve severely tested, especially on their travels.

Georgia remain an unknown quantity, rebuilding after a disastrous World Cup campaign, in which they finished fourth and suffered at the hands of two European giants, Spain and France. Despite being on the wrong end of a 4-0 drumming in Dublin last year, Ketsbaia’s charges have a number of players plying their trade in Russia, Romania, Ukraine, and further afield. Cluj playmaker and U21 star Giorgi Chanturia is one to watch.

Ireland entertain newcomers Gibraltar on October 11th, the territory just recently being affiliated with European football governing body, UEFA. The Gibraltar Football Association dates back to 1895 and has a rich philosophy and tradition, relying largely on home-grown talent from the likes of Manchester 62, Lincoln, and Lynx FC.

That said, Danny Higginbotham is one of their most famous sons, declaring his intention to retire after friendlies against Faroe Islands and Estonia next month. The ten club wonder started his career with Manchester United in 1998, before being shipped out to Antwerp, Derby, Stoke, Southampton, amongst others. Could he be tempted to soldier on for another few caps?

Considered minnows and rank outsiders by many, the men from ‘The Rock’ may well struggle, but that is to be expected in what is a very challenging group overall. They boast several players from England’s lower leagues, David Artell and Reece Styche playing with Wrexham and Wycombe Wanderers respectively. Expect them to battle hard and be competitive, they will be out to claim a scalp. A potential banana skin if taken for granted.

Germany host Ireland three days later on October 14th. Joachim Lowe’s side are outright favourites to top the group, with second place still up for grabs. The Mannschaft possess a squad with real depth, youth and exuberance, workmanlike yet formidable.

Reigning European Club Champions Bayern Munich have left their stamp on the international stage, the septuplet of Neuer, Boateng, Lahm, Gotze, Muller, Kroos and Schweinsteiger striking fear into the heart of even the most seasoned of campaigners and heavyweights.

The strength of the Bundesliga is in stark contrast to domestic leagues in England, Ireland and Scotland, with Bayern, Dortmund and Leverkusen featuring regularly in the latter stages of the Champions and Europa League, and contributing vast numbers of local talent onto the national scene. Indeed, 21 out of the 25 players listed in their current squad play in Germany, the remaining few lining out for teams in Italy, Spain and England’s top tiers.

Ireland’s dismal showing against Germany has continued since 2007, with Steve Staunton the last manager to claim a positive result, a bore draw in Dublin that same year. Trapattoni’s tenure saw Ireland concede nine goals in two games, including a 6-1 humbling at the Aviva. Hapless performances against Sweden and Austria followed, signalling the end of an ill-fated five year reign.

2014 brings with it eternal optimism. The people’s choice is also a popular one. Martin O’Neill and Roy Keane represent the perfect duo, having extensive managerial and playing experience across the channel. The Celtic connection is back, and any boos reserved for the Italian have long since waned. Confidence is being restored, players once overlooked are being scouted and joining ranks, and youth is being primed and readied for action.

Proponents of Trap’s system will say that “he got the best out of a bad lot”. In Andrews, Cox, Whelan and company, who can disagree? Qualifying for Poland and Ukraine 2012 was a major triumph, given Henry’s divine intervention and imposed heartbreak in France two years previous. But his abrasive and stubborn attitude failed to endear him to the Irish crowd and media.

His command of the English language was virtually non-existent, as was his attendance at scouting missions in England and Scotland. These players formed the backbone of Trap’s ageing team, at the expense of more creative and vibrant solutions. James McCarthy, James McClean, Seamus Coleman, Anthony Pilkington, Wes Hoolahan and Stephen Ireland will more than likely be given the chance to flourish and impress, having suffered greatly in recent times. New constraints, systems and tactics will be implemented, but the slate is wiped clean.

Germany are the benchmark, but the race for second is a three-way split. Poland and Scotland are vying that spot too.

Matchday four sees Ireland make the short trek to Scotland on November 14th. Gordon Strachan’s side have gone from strength to strength since he took over from Craig Levein in early 2013. Impressive away results in Croatia and Macedonia call for renewed optimism in the Scottish camp.

His outfit take on Poland on March 5th, a keenly awaited friendly in Warsaw, given added significance by today’s pairings. Recent results have been kind to Ireland, although only by the narrowest of margins and the odd goal in three. The Tartan Army bring a colourful and intimidating atmosphere, so there are no guarantees that Hampden will be a happy hunting ground for the Irish.

Both sides share some common ground and history, having suffered agonising play-off defeats in `99. The Scots crashing out to arch rivals England by a solitary away goal, and the men in green firing blanks in Turkey. Hardship and near misses are central to Scottish and Irish identity, but in Strachan, the SFA have appointed a great motivator and patriot, someone who can lead them into battle and relive the glory days of Euro `96.

Scotland also have a large Premier League and SPL contingent. Allan McGregor, Alan Hutton, Charlie Mulgrew, Darren Fletcher, Steven Whittaker, Robert Snodgrass, Scott Brown and Steven Naismith all anchor the team, ably served by James Forrest and Jordan Rhodes, as well as a host of fresh and emerging talent. The Saltire will be looking to push Poland off second place and jostle Ireland to the finish. Expect a fiercely contested and nervy 90 minutes, neither side can afford to lose this one.

A home tie against Poland completes the first round of fixtures on March 29th, 2015. The Euro 2012 co-hosts failed to live up to their early promise, finishing well behind England, Ukraine and fellow strugglers Montenegro, in failing to qualify for this year’s World Cup. The sides last met in 2013, Ireland winning 2-0 at home and drawing 0-0 away in the return friendly.

Poland’s current form can be described as patchy at best, but they still have the calibre of player needed to hurt and cause Ireland problems. Lewandowski, Obraniak and Polanski are dangermen in the final third. Set-pieces may cause Ireland a few worries, but Poland’s pedigree and reputation precedes them. They are vulnerable away from the comforts of Warsaw. It’s up to O’Neill’s young guns to exploit that weakness.

Prediction: Germany to remain unbeaten and take near maximum points (26), with the odd away draw. Ireland to finish second on 19, suffering two losses to the table toppers and an away defeat in the Polish capital. Scotland a close third, with November’s clash proving decisive.