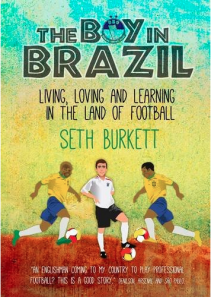 When BackPagefootball.com contributor Seth Burkett travelled to Brazil for a youth tournament with his local team Stamford, he was stunned by what happened next. Spotted by a scout, he accepted an offer to join Sorriso EC in the state of Mato Grosso and became a media celebrity as well as the only English professional in the football-crazy country.

Seth has shared his experiences playing in Brazil as an 18-year-old in his book ‘The Boy in Brazil’ – a superb journal of Seth’s own journey and the cultural, economic and footballing differences that he experiences along the way. I caught up with Seth to find out some background to the book and his own experiences in Brazil.

At the age of 18 I was playing for my local team, Stamford AFC. Around Christmas time a local Brazilian began to turn up to our games, and as he befriended the team he gave us an offer to play in a tournament in Brazil. We all jumped at the chance and found ourselves jetting off that June.

You must have impressed them!

Five of us were chosen to train with Vitoria EC, who were in the top division of Brazilian football. After a week their manager approached me following a training session. It turned out his left back had been called up for Brazil under 20s and he needed a replacement for a friendly the next day – could I do the job? I jumped at the chance and the next day I found myself lining up in the red and black of Vitoria. I must have done well in the friendly as Emerson, who had been recruited to help our team in the tournament, was watching, and he was so impressed that he invited me back to play in his team, Sorriso EC.

Sorriso EC? Not one of the better known Brazilian clubs…

Sorriso are based in Mato Grosso, one of the provinces in the west of Brazil. It took me 32 hours to get there and when I finally made it I was hardly overawed. It turned out I was due to live in a converted garage with 31 of my teammates, none of whom spoke English. It was filthy, it was disgusting, it was cramped, and it was my home.

There were six of us staying in my small room. The larger room next door housed 14 Brazilians. All of the windows were barred. We lived on the edge of the favela. The toilets had no doors. The house never got cleaned, only when people were caught breaking curfew and even though this happened every night, they were so skilled at reentering the house undetected that the floors remained unwashed.

Breaking curfew was a big part of my stay. One of the bars was missing in the window of my room, meaning that my room was used as the gateway to parties. There would always be at least two Brazilians jumping back through the window at around 5am, even when we had training at 7.30am

What were your experiences truing in Brazil?

Training itself was hard. It was so hot and humid. Some days it got to over 50 degrees in the sun. It was literally like playing in a sauna, it was hard to breathe.

It was a different culture in training also. Everything was done with the ball. Nutmegs were celebrated more than goals. In my first training session with Stamford as a scrawny 16-year-old I nutmegged the first team captain. The next time I received the ball he two footed me and I was out injured for two weeks. In my first session with the Sorriso first team I nutmegged the captain. He just turned round and applauded me. ‘Much good, Inglese’.

Apart from the odd nutmeg did the locals welcome your presence?

Without a doubt the people were the best thing about Brazil. They were so happy and joyful, their positivity was infectious, even when some had so little. Fernando came from the Rio favelas and was desperately poor. All he brought to Sorriso for a four-month stay was a backpack with flip-flops, a pair of football boots, shorts, a vest and a toothbrush. At the end of each month we’d receive our salary of 300 Reais, about £120 at the time. Fernando would take out 20 for himself and send the rest back to his family in Rio. He was the happiest person I’ve ever met.

From your experience how extensive are the social problems in Brazil?

Unfortunately poverty is a big issue in Brazil. It is not unusual to find a gated community a stones throw from a favela. The geographical proximity, yet also the economic distance between rich and poor, is striking in Brazil. There were other pressing social issues, such as homophobia, racism and widespread corruption, that I witnessed in Brazil, and which I discuss in my book. These issues made me question my time in Brazil, whether I was just a naive young kid who wanted to see the best in a happy, joyful country which still has a long way to go.

Obviously the eyes of the world will be on Brazil for the next couple of months, how do you think it will go?

I’m sure that Brazil will put on a fantastic World Cup. Like I said, the people are so positive that it is infectious, and football for them is more than a sport. It is a passion, a first love. I’m not surprised that there have been protests. It’s staggering to think that a country with such dirty, dingy hospitals, inadequate schools and poor public transport can afford to spend so much on football.

Would you change anything about your experience?

I wouldn’t exchange my experiences in Brazil for the world. My time in Sorriso was the best of my life. It improved me immeasurably both on and off the field and I met so many fascinating and inspiring people, so much so that I wanted to share my experiences in the book.

‘The Boy in Brazil: Living, Loving and Learning in the Land of Football’ is available from Amazon and Foyles in paperback, RRP: £9.99. A kindle version will be available from June 5th, priced at £4.95.