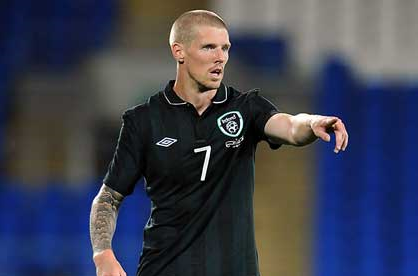 The offseason can be a difficult time for an out of contract professional football player, with uncertainty over where the next deal is coming from and a family to support.

At 28, Andy Keogh fancied a new challenge after being released by English Championship side Millwall and the opportunity of security with Perth Glory in the Australian A-League was too good to refuse.

The Republic of Ireland international is very familiar with Perth and has family in city’s northern suburbs, while he was also part of the Wolverhampton Wanderers squad that took on Glory as part of a tour in 2009. He is due to arrive in Western Australia with his wife Natalie and their nine-year-old daughter ahead of Glory’s preseason training programme which starts on June 18.

“I’m looking forward to it, I’ve got family and friends that live out there already,” he says.

“I’ve been there before on holiday and with a preseason tour with Wolves, and me and the family are looking forward to it really. It’s a new challenge and a new beginning.”

Keogh, who has 30 Irish caps and two goals to his name, last played for the national team against Wales last year but is yet to feature under Martin O’Neill since he replaced Giovanni Trapattoni as manager in November.

However, he doesn’t believe that a move to the other side of the world will result in an “out of sight, out of mind” situation, citing Robbie Keane at LA Galaxy and Darren O’Dea at Metalurh Donetsk as two examples of players still involved in the international set up.

“I haven’t spoken to Martin O’Neill because I think he took over six months ago and I’ve not been involved,” he says.

“There were a few issues at Millwall where I wasn’t playing in my position so that was frustrating for me at the time because I wasn’t getting to show the new management what I could do.

“I haven’t closed the door on anything like that, I just want to do as well as I can for the club.”

After starting his career in England with Leeds United more than a decade ago, Keogh moved around a lot and had stints with Scunthorpe United, Bury, Wolverhampton Wanderers, Cardiff City, Bristol City, Millwall and Blackpool.

Glory had been on the lookout for a new number nine after it was confirmed that Australian marquee player and New Zealand international Shane Smeltz would be leaving the club after three seasons. Smeltz is the league’s second all time top scorer with 77 goals in 135 games and Keogh will be tasked with leading the line in his place.

Glory CEO Jason Brewer had been an admirer of Keogh’s for a while and is delighted to have an experienced international on board for the next few seasons.

“It’s another positive signing for Perth Glory. Andy is an exciting player, very hard-working, who plays football to win and to score goals,” he said in a club press release announcing the deal.

“I met up with Andy earlier this month in the UK, he’s got a fantastic attitude and it’s great to be able to bring a player of such quality and experience into the Perth Glory squad.”

Keogh isn’t the first Irishman to don the purple of Glory with fellow Irish international Liam Miller having spent two years in Perth before switching to Brisbane Roar at the beginning of last season.

Despite interest from other clubs, it was Glory who won out in the end with Keogh eager to test himself in another part of the world.

“I had offers from England, I actually met a few managers before I decided what I was going to do and before the Glory thing became more likely to happen,” he says.

“I was just biding my time, deciding which option to take. I sat down with the family and discussed things and we decided to go for it.

“The trend has been for players in the last couple of years of their career to go abroad to MLS or the A-League but I thought that instead of doing that I’d with it and really make a name for myself.”

When asked about some of the negative attitudes that can come with a move to developing competitions such as the A-League, Keogh wasn’t phased and is simply eager to embrace the new challenge on offer.

“I’m really intrigued to establish myself and make my mark in Australia and hopefully in the Asian Champions League,” he says.

“I’ve done the Premier League, the Championship and internationals, and scored goals in all of that so I found that England was not appealing to me as much anymore and I wanted to try something new.”

Glory are coming off the back of a difficult 2013/14 campaign that saw them flirt with last place on the ten team ladder right up until the final few weeks but are hoping to return to the highs of 2012 where they made the Grand Final, losing 2-1 to Brisbane Roar.

The aim this season is return to the finals, which consists of the top six finishers, and Keogh says that he is aware of what’s needed to succeed.

“The main thing is building team spirit and togetherness, people may underestimate that in football,” he says.

“For me personally, whenever I’ve been involved in promotions, it’s always been about the spirit and the lads wanting to do it for one another so I think that needs to be built.

“Obviously with new faces and additions that will be key, and with the good manager that we and the quality players brought in it’s going to be down to hard work.”

The 2014/15 A-League season kicks off at the beginning of October.