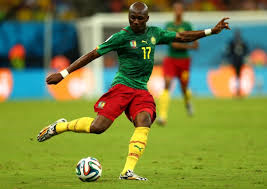 Categorising Cameroon’s World Cup as a disaster would be putting things mildly, with the Indomitable Lions enduring a campaign that leapt from one debacle to the next. That plight in Brazil arguably signified the tipping point of what has been a turbulent recent history – even by Cameroonian standards – with the once continental powers suffering also the ignominy of consecutive AFCON qualification failures.

In spite of their World Cup humiliation – which has all but destroyed a once prestigious history on the global stage – the Cameroonian authorities opted to retain Volker Finke – instead laying the blame firmly at the doors of the playing personnel.

A testing group draw generated substantial anxiety in regards to the possibility of Cameroon missing an unprecedented third successive tournament, with Ivory Coast, DR Congo and Sierra Leone the assignment presented to the perceived vulnerable lions.

The most fundamental change post World Cup has been the retirement of Samuel Eto’o, who despite the unquestionable talent and accolades has become a constant disruptive influence. The iconic striker has long been synonymous with farcical off field episodes which have persistently plagued Cameroonian football – in a perverse way many viewed the retirement of Eto’o as essential in the nation’s quest to negotiate the doldrums.

In selecting his squad for the recently concluded qualifiers, Finke was also conversely aided by Alex Song’s suspension – another individual who has consistently courted controversy with the national team. In total the German opted to axe 13 of the squad that made the much lamented trip to Brazil – although of those several took the decision out of Finke’s hands.

A trip to DR Congo signified a potential banana skin at the first hurdle, although the leopards themselves have experienced a prolonged period of stagnation – nonetheless for a side still hurting post-Brazil the trip to Lubumbashi was far from a straight forward proposition.

That stumbling block was however navigated relatively comfortably – although a desperate DR Congo aided Cameroon in taking their first steps towards recovery – with newly capped Clinton N’Jie opening the scoring before Vincent Aboubakar – the man tasked with filling the shoes of Eto’o – completed the routine success.  The most startling of changes by Finke aside from the selection of Lyon’s N’Jie saw 18 -ear-old Fabrice Ondoa handed the gloves, whilst Stephen Mbia was presented the task of unifying a previously fragmented group.

Aboubakar and N’Jie would combine again just four days later, with the pair each claiming a brace to plot a 4-1 demolition of Ivory Coast in Yaoundé. The capital has always been a stranglehold for the Indomitable Lions – even throughout the period of famine – whilst Ivory Coast have entered their own period of transition – nonetheless it is difficult not be enthused by Wednesday’s developments.

Aboubakar in particularly was able to wreak consistent havoc on a worryingly lacking Ivoirian back line – in the Porto man Cameroon are in the luxurious position of being able to replace one of Africa’s all-time icons with a player who is fast becoming one of the most feared strikers on the continent.

That resounding success lays the footmarks towards Cameroon repairing the damage caused by the summer’s catastrophe – although it will be sometime before those lasting wounds are fully healed. What Finke and his side have done over the last week is navigate what were undeniably choppy waters, with the two victories seeing the Indomitable Lions take significant steps towards Morocco and a first AFCON since 2010.

Such is the nature of Cameroonian football that to suggest the corner has been turned would be jumping the gun – there have been numerous false dawns throughout recent history that have then been followed by an inevitable implosion. The building blocks however appear in place for a more unified Cameroon – although Finke has decisions to make regarding Song – with maintenance of that squad harmony liable to hold the key in regards to whether Cameroon are truly capable of a prosperous new era – so often a lack of cohesion has proven the West Africans undoing.

African football authorities are frequently the brunt of criticism – in the majority of cases with good reason – however the retention of Finke is worthy of accreditation – even if that seemingly profitable decision was made more by luck than judgment. Arguably the plight in Brazil was beyond the 66-year-old’s control and in selecting a more youthful squad – at 28 Mbia is the joint oldest member of the current squad – Finke is just maybe molding a side willing to buy into his ideas.

There will be substantial challenges ahead, with disruption always a lingering danger surrounding Africa football however for the first time in several years, at least in the short term, Cameroon can look to the horizon with positive intent.