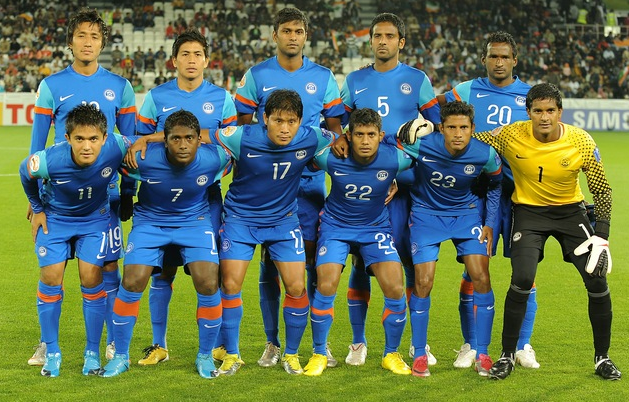 As he took to the field in the muggy September air, a deafening roar erupted from amongst the thousands of spectators, many of whom had travelled from afar to see their idol in the flesh. Supporters rushed to the front of the stand, straining their every muscle to capture this moment within their minds and hearts. Lionel Messi does not react. He has grown accustomed to this brand of hero-worship. But this is not Barcelona or Buenos Aires, instead this is the Salt Lake Stadium, Kolkata, India and 120,000 have arrived to watch Lionel Messi, and his Argentine teammates, take on Venezuela in the biggest football event in India’s history.

For a country that has last qualified for a World Cup in 1950 and currently ranks 163 in the FIFA world rankings, India would not appear at first glance to be a hotbed of footballing activity. However, this would be doing a disservice to a country that is developing a growing appetite for their former British colonial ruler’s ‘other game.’

Thanks to satellite television and an explosion in the amount of television channels being distributed, football is reaching in to an increasing number of Indian homes and catching the imagination of the urban middle-classes. The figures may just surprise you. The FIFA World Cup was watched by 34 million people in 2002. By the 2010 tournament that figure had reached 63 million, an astounding increase in viewers. India’s TAM Media Research report’s ‘among non-cricket sports, soccer is at number one in India, there are eighty-three million football viewers in the country and 55 per cent of them watch domestic leagues.’

These figures haven’t gone unnoticed by the world’s leading clubs. Always anxious to exploit any new market, in particular one which boasts 1.2 billion people and has an economy growing at a rate of 8% per year, the money men’s eyes have shifted to India and its huge youth population which are embracing their new-found exposure to football with gusto.

The English Premier League, with channels such as ESPN Star Sports showing 230 matches per season, has found itself millions of new viewers and supporters. The club’s have begun to respond. In December 2011 Manchester United opened their first store in Mumbai. The success of this quickly led to six more outlets appearing and their merchandise spreading to within sixty department stores across the country. In 2012, Mumbai played host to the Manchester club’s first football academy in India. They join Liverpool who opened their academy last year in Pune and plan to open up to five by the end of 2012. Arsenal and Chelsea will not be far behind.

It is not just the Premier League which has caught the imagination, Barcelona, perhaps India’s most popular football team, has announced plans to open an academy in Gurgaon while Real Madrid are heavily rumoured to be following suit. Bayern Munich visited Kolkata in 2008 for an exhibition match against the national side that had an attendance of 125,000 people. The German side have been regular visitors to India ever since.

Within the next few years it is likely that the clubs mentioned, as well as others, will become regular visitors to the country as they attempt to capitalise on two things. The first and likely main objective is merchandising. It’s par for the course now that football is a global game. As such, the major clubs are prepared to trek the globe in a quest to increase their reach and more crucially their revenue. In 2010 the UK-India Business Council estimated that the sportswear market in India was worth over £300 million pounds and that is a figure that is expected to rise sharply as football’s popularity increases and India’s middle class becomes more affluent. What has started with stores and academies inevitably is the precursor for money-spinning summer tours to come like we see in North America and other Asian countries each pre-season now. Within the next few years we are likely to see the word’s top clubs facing each other across Indian cities, something almost unthinkable at one time.

The second aspect that attracts these clubs is the capacity for untapped player’s potential. To say that the Indian national team has underachieved since it famously declined to attend the 1950 World Cup on account of it’s players being asked to wear football boots, is quite an understatement. Cricket, for so long usually the only visible game being played by youngsters on the streets of India outside of the northeast of the country, has found a rival for its nations children’s affections. The increase in visibility of football has led to a huge number of youngsters taking up the beautiful game. The European clubs hope to use this to their advantage by establishing a beachhead in India for grooming future stars for their first-teams – the revenue potential of which would be considerable within a country that idolises its sporting heroes. For a country that has historically experienced foreign incursions as a result of its natural resources, this will be nothing new.

Paradoxically, the ripple effect usually brought on by a boom in football’s popularity has not favourably affected the fortunes of India’s national side unlike the experience of Japan and South Korea, both of whom experienced a boom in football’s popularity in the past twenty years. A long-standing issue with the game in India has been a lack of money and infrastructure within the game. Cricket, for over a hundred years imbedded within the DNA of Indian culture, has left football a neglected stepchild by comparison, starved of attention and, crucially, investment. The lack of big-name talents on show in the domestic leagues has done little to attract spectators to many of the cash starved clubs, many of whom have struggled to stay afloat in recent times.

However, there are signs that much-needed change is on the horizon. In 2010 the AIFF (All India Football Federation) signed a fifteen year deal worth $140 million dollars with IMG, a global sports and media developing firm based in the USA, and India’s Reliance Industries, to ‘radically restructure, overhaul, improve, popularize and promote soccer on an amateur and professional level’. According to the Indian Express, the deal allowed IMG and Reliance to control the Indian national football team and all current and future professional leagues. Commercially, the partners have control over all sponsorship, advertising, licensing, merchandising and franchise rights.

IMG and Reliance are no fools. They will have noted the success of cricket’s wildly popular IPL (Indian Premier League) which has been valued at £3 billion pounds and estimated that, at current rate, football has a good chance of one day, if not necessarily surpassing cricket in India, then certainly become a competitive rival. However, making the domestic I-League marketable and, crucially for all concerned, profitable will take some time to accomplish. IMG’s senior-vice president, Jefferson Slack, told India’s Daily News & Analysis, “You can sit at home and watch Manchester United play Real Madrid…we’ve got to compete with that. And that’s the hard reality everywhere around the world. To make the league appealing, we need to improve the playing standard and generate a buzz so that it gets a broadcaster interested. But it all comes down to whether the people are interested. Right now in Indian football, people are not. But things will get better.”

Improving the playing standard will take some time but the long-awaited investment has begun. The Premier League’s academies will produce, if not players destined to go overseas, then players with a higher quality of coaching and expertise than was otherwise already available. However, there is a lot of work still to be done to bring access to India’s poorer children. At Manchester United’s Mumbai academy, the costs are prohibitive to many who would like to take part. A trainee has to pay 12,600 rupees ($256; £162) for a course lasting 10 sessions. Football, a traditional working-class sport, is in danger of forgetting its roots here. Often, the best talent emerges from the less privileged environments; we need only look at Brazil for evidence of this. However, in countries such as Brazil and Argentina, football is ingrained into a young person’s life from birth. As such, there are pitches and teams available to use and join for even the poorest children. Improving grass-roots participation through youth programmes and activities is one of the key challenge’s Indian football faces

The money has only begun to trickle in but the potential for an audience has been spotted by several investors. Cue, to much media hoopla, the formation of a new Indian league; Premier League Soccer. The Celebrity Management Group alongside the IFA (Indian Football Association) last year announced a new league set within the state of West Bengal of six clubs, or franchises, to compete in a league season lasting eight weeks during the ‘off-season’ for the domestic players. Do not let the IFA name confuse you. The IFA administers football within the state of West Bengal while the AIFF administers on a national scale.

Any developing league invariably relies upon importing well-known overseas players to spark interest in the product. Also announced for this brave new world of Indian football were several well known players such as Fabio Cannavaro, Hernan Crespo and Robert Pires, all now at the end of their careers, who were to be available to the six franchises to scrap over as part of an auction. The players, of course, sung the virtues of bringing their own brand of football to the great country of India, but the bulk of each clubs $600,000 dollar salary cap would undoubtedly be finding its way into their back-pockets. A price worth paying for the exposure they would provide the league, some could argue.

The stage was all set for the latest biggest event in India’s footballing history. But it didn’t happen.  Beset with problems from the outset the league was postponed indefinitely in February this year. The West Bengal state government refused to allow access to its stadia due to the murkiness of the tournament’s finances and source of funding. The AIFF, for their part, refused to allow player’s from their I-League to join, citing that the league was a state-run, and not national, tournament. The rumour now is that the AIFF, along with their commercial partner IMG, plan on organising their own franchise-based mini – league to take place next year.

The impact of overseas football within India has been a double-edged sword thus far. Interest in the game itself has spiked considerably but at the expense of the domestic leagues which still struggles to compete with the foreign stars that appear on the television. Aware of the interest in their product, the Premier League and La Liga sharks have begun to circle a vast, new market ripe for exploitation. India is set to be the next battleground between these global clubs.

However, overseas involvement, such as IMG, within Indian football itself is not necessarily a bad thing especially in terms of generating revenue through commercialising the product. The investment in infrastructure and an increased awareness in the revenue potential of football will hopefully lead to an increase in the amount of spectators entering the grounds. It is a domino effect. The more spectators will mean more supporters and more supporters equal younger players aspiring to represent that club in the future.

Perhaps then, the breakthrough moment will come with what India’s young people ultimately desire, their own home grown stars to get behind. If they could create a player, perhaps dare one say, at or near the equivalency of crickets Sachin Tendulkar, then Indian football may just yet take off in the country that world football almost once gave up upon.

Writes about footy for blogs, websites, magazines. That short of thing. Has a weekly column @AnfieldHQ, but it's the more niche stories that I enjoy researching.