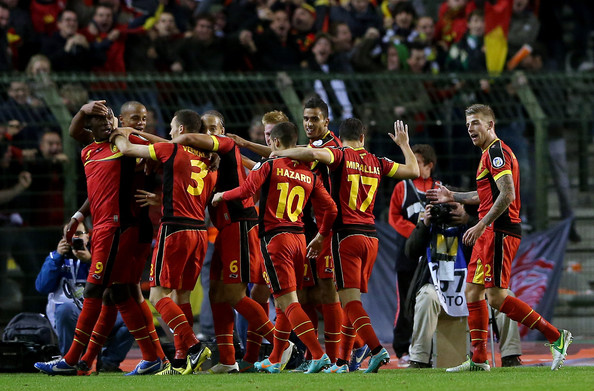 Amid growing paranoia in Europe about the effects of immigration, the emergence of Belgium as a footballing heavyweight has highlighted the positive effects converging nationalities can have on a nation.

Winning eight and losing none of their ten qualifying matches, Belgium secured their passage to Brazil with a kind of style and dominance more commonly associated with their Dutch or German neighbours. A golden generation, that loathed term in England, spread across the top clubs of Europe, now look set to take the world cup by storm and could possibly bring home the country’s first international trophy.

But the story of how a team that has failed to qualify for any international tournament since 2002 are currently fifth favourites to win the trophy outright begins in places such as the Democratic Republic of the Congo, Morocco, Kosovo, Mali and Zaire, just as much as it does in Belgium. It’s one that could soon make the front pages, as well as the back, of newspapers across Europe. It’s the story of immigration, Belgium and the World Cup.

Belgium’s last census showed that around 25% of the country’s population identified themselves as having a foreign background. This mostly came about from the country’s deliberate attempts in the 1950s and 60s to reshape their work force by attracting immigrants from Southern Europe, North Africa and Turkey. Offering a flexible work permit route into Europe, as well as relaxed family reunification laws, the country was able to attract many new residents in the post-War era.

Belgium’s place as the host country of the European Union only added to this diverse climate. Beginning with a downward economic trend in the late 1960s, and faced with rising youth unemployment, the Belgian government tightened their systems and stopped advertising for more people to come join them. But the country had already changed greatly by that stage, and the Belgium that has emerged since has often been seen to be factional, a kind of smaller version of the debate that rages in Spain about unification and the meaning of identifying with your given nationality.

Belgium has always come across as having an identity crisis, many want to disband the country regardless of the immigration debate, they simply don’t see themselves as Belgian. None more so is this the case than in Flanders, where political parties like the NVA campaign on a gradual withdrawal of the, predominantly, Flemish areas from Belgium.

That said, they are not to be mistaken with far right groups like France’s National Front, or the Dutch Freedom Party. They see a difference between Flemish speaking Belgians and their French-speaking counterparts but they do not want an immediate cutting of state ties, campaigning instead for a gradual separation over a number of decades. The party have come in to conflict with the national team already however, perhaps not surprising since they represent everything the NVA do not want, a new, united and proud Belgium. Vincent Kompany and the party chairman, Bart De Wever, have exchanged blows over De Wever’s electoral victory boast that, “Antwerp is for everybody, but tonight, especially for us”. Kompany tweeting in response, after the side secured World Cup qualification, that “Belgium is for everybody, but tonight, especially for us!”. The team captain is also widely expected to enter into politics in his home country once his football career winds down.

But off the field politics has held little bearing on the national team so far. This group of mixed nationalities do not seem ready to implode in the manner of some teams in the past, most notably their Dutch counterparts. They seem a more cohesive unit, a national side actually playing for the pride of their country. A quick look across their World Cup squad also shows a side playing at the very top levels of football already too.The captain, Vincent Kompany, of Congolese descent, is also the captain of the English Premier League champions, Manchester City. Fighting for the goalkeeper position is Simon Mignolet of Liverpool and Thibaut Courtois, just off picking up a La Liga winners medal with Atletico Madrid. Others come from footballing heavyweights like Bayern Munich, Arsenal, Porto, Manchester United and Chelsea.

Many of them also have the ability to claim dual nationality. Moussa Dembele has a Malian father, Romelu Lukaku’s father actually played for the Democratic Republic of Congo’s national side and Christian Benteke, though out of the World Cup through injury, was born there. Marouane Fellaini and Nacer Chadli have Morrocean ties, Alex Witsel’s father is from the Caribbean island of Martinique and Man Utd’s most exciting prospect, Adnan Januzaj, was born in Brussels after his father left the former Yugoslavia at the outset of war in 1992.

If they seem largely separated in background stories than the opposite is the truth on the pitch. The team seems to understand that they have the opportunity to unite the nation in a way similar to the great French team of 1998. There foreign-born players like Desailly, Thuram and Vieria mixed with sons of immigrants, like Zidane, Henry and Djorkaeff, and other French-born players, like Barthez, Blanc and Petit, to produce one of the great World Cup performances of all time. Their triumph was said to be a triumph for multiculturalism, something to unite all of France and those who made it their home under one roof. It certainly happened initially but the long-term effects are debatable.

Belgium offers a different story though. A country of eleven million people, with a quarter of the country identifying themselves as having a foreign background, the results should be clearer over time than in a country the size of France. The team seems aware of this opportunity to make national history and to unite people under the one tricolour.

With a group containing Russia, South Korea and Algeria, they are largely expected to advance to the second stage of the tournament, most likely to face one of Germany or Portugal. The team’s exploits, the hipster’s choice, as many have called them, will be followed with interest by football fans across the globe, but, perhaps, it should be followed by anyone looking for a good news story for the EU and the success of multiculturalism even more so.