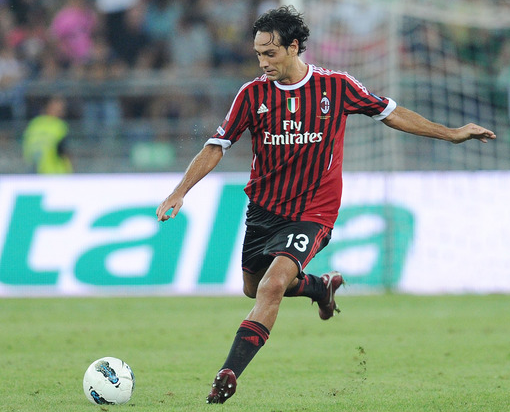 As I heard the news about Alessandro Nesta leaving Milan it reminded me of the time when I was just a little six year old girl holding my moms hand as she took me to a sports shop. All the colors and jerseys were there all stacked up on a shelf, some hanging and she took me to the Milan side and said “well we are here pick what you want”.

The first shirt that I saw was Inzaghi and then Maldini and right after him was Alessandro Nesta. I picked up the Nesta shirt and said “I want this one” and when she asked why I said “because he’s Nesta, mommy”.

I have fallen in love and out of love faster than anybody I know. Not with ordinary people not with ordinary things but with legends like Nesta and Inzaghi. Not with ordinary things but with things like the San Siro that when it screams you can hear it till the end of Italy, with the game and with everything it has to offer. So this article isn’t going to be about how many records our legends have broken because legends aren’t facts to be recorded they are materials to be molded. They make reality seem like a dream and become more useful than records and facts.

Men fall and rise like wheat grains but these men were something special. Something that can never be replaced. They aren’t born every day they are born once in a blue moon and when they do take that field and score a goal or defend its isn’t something ordinary it isn’t something usual. Its something the whole world respects and learns to love. It’s something I learned over the years and hearing this news broke my heart into many pieces as my definition of Milan was Nesta, Inzaghi, Seedorf and Gattuso who will all be leaving at the end of the season and the whole world will have to say their goodbyes to them on the 13th after the game against Novara.

When people like Nesta leave they still live on because legends like these pass what they know to other people just like Nesta passed on his skills on to Thiago Silva. I still remember when Barcelona came to San Siro this season for the UCL. My heart would skip a million beats the second the ball went near the penalty area and I used to lose faith but then there he was…Nesta with his world class defending that restored my faith. Even when I was a little girl I used to cover my eyes with my hands every time the other team tried to score until I realized we were “safe” as long as we had legends like Maldini. When he left I was still sure about our safety due to Nesta’s presence. The first thing that came to my mind when I heard the news was who’s going to have our back now? Who’s going to be there to defend us and be our guardian? Sure, we have world class players like Thiago Silva but Nesta was something different like I said people like him are born once in a blue moon.

To make matters worse Inzaghi will also be leaving along with Seedorf and Gattuso. When Pirlo left it was one hard pill to swallow. And since then Milan have been looking for a midfielder that they weren’t able to find. With Seedorf leaving it just makes matters worse. For now my feelings about the club and how we are going to win or lose have shifted and are pretty quiet as I still cant move on from the idea about what was once my definition is gone.

Sure it is something positive for the Rossoneri as there will be fresh and faster legs on the pitch now which will boost the chances of winning against teams like Real Madrid. This reminds me of the time when Milan were losing to Real Madrid in the UCL and Inzaghi came on towards the end and scored two goals and ran like the Greek boy who started the Olympics while Mourinho stood by the Real Madrid bench stunned at what he was seeing. It was the same game that saw Gattuso get into a fight with Ronaldo and got the entire crowd on their feet. It was the same night when Nesta defended against Marcelo and saved us from a loss. There are many more matches we could talk about, many great matches that have so many memories so many things to learn from. So I put my thoughts and my feelings into this article as what I believed in once is gone, At least for now because when the legends go there is no more greatness. No more dreams.

Goodbye to everything legendary.

“Greatness and goodness are not means, but ends” – Samuel Taylor Coleridge.

One thought on “I say hello, you say goodbye – Bidding farewell to Nesta”