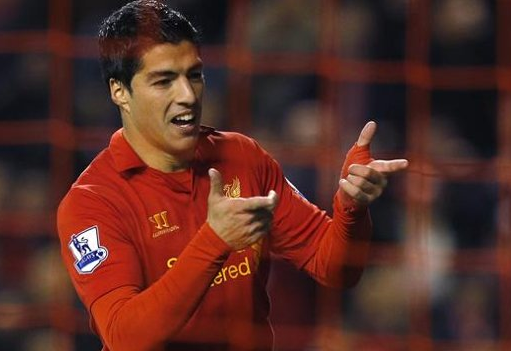 A recent BackPageFootball article by Alan Breen discussed the divided opinion of Luis Suarez. But there is more to that story than provided in the brief article. Justin Cormick picks up where Breen left off as he dissects the man that is Luis Suarez, and attempts to decide whether he is a football hero or villain.

Uruguayan Primera Division 2005-06 Season: Nacional v Defensor. Some men sat in the crowd, paying special attention to one of Nacional’s young forwards. The young footballer received the ball from a team mate. He dribbled towards the opponent’s goal, beating two defenders, one of them with a sneaky nutmeg. The goalkeeper came towards the boy, who expertly chipped the ball with his left foot, sending it over the keeper’s head and into the back of the net.

Nacional won the match with the forward being awarded and scoring a penalty. “It was the best game I ever had in Uruguay!” he would later explain. After the match the men from the crowd confronted the boy and explained they were Dutch football scouts. They asked him his name. He told them:

“Luis Alberto Suárez Díaz,” claims Wikipedia, “is a Uruguayan footballer who plays for Premier League club Liverpool and the Uruguayan national team.” El Pistolero or the Gunslinger, as Suarez has been nicknamed, has also played for Uruguay’s Nacional, and Holland’s Groningen and Ajax. Over the years Suarez has scored and created many impressive goals. He has also been involved in a number of unsavoury incidents that have seen him named a villain.

It was during the 2010 World Cup that the world first became aware of Luis Suarez. It was not, however, his three goals or two ‘Man of the Match’ performances that earned him this recognition. Instead it was the notorious handball incident against Ghana in the quarter finals. After topping group A thanks to a Suarez goal in their final match against Mexico, la Celeste came up against South Korea. El Pistolero scored two goals, including this spectacular effort to win the ‘man of the match’ and make the quarter finals where they were to face off with Ghana, the only remaining African nation.

Late in extra time, and levelled at 1 all, a Ghanaian free-kick was hit into the box and headed towards the goal. With the Uruguayan keeper out of position the ball was heading straight into the back of the net. “I do regret what happened,” Suarez since explained, “but if you asked 1,000 footballers I believe they would tell you they would have done exactly the same thing…We were fighting for a place in a World Cup semi-final and I had the chance to stop a goal.”

Suarez jumped, raised his hands, and pushed the ball away from the goals. “I didn’t have time to think about it. I just did it.” Ghanaian hands were raised, the referee raised his own hand to his top pocket, withdrawing a red card and pointing to the spot. Suarez protested but was ordered to leave to field. Asamoah Gyan fired the resulting penalty straight over the keeper’s head and into the cross bar. Uruguay proceeded through during the penalty shoot-out. They were defeated 2-3 in the semis by Holland, and lost the third-place play off 2-3 to Germany.

The football world knew about Suarez before the World Cup from his time in the Eredivisie. His spectacular goal in front of the Dutch scouts earned him a ticket to FC Gronginen, where he played one season before transferring to Amsterdam. In his first season at Ajax, el Pistolero scored 17 goals in 33 games. In his second season he managed 22 goals in 31 matches. For his third season Suarez received the captain’s armband, and with 35 goals in 33 games was the league’s top scorer.

It was in Amsterdam that Suarez earned another nickname. During a nil-all performance against PSV Eindhoven, Suarez bit an opponent on the shoulder. Dutch newspaper de Telegraaf labelled Suarez “the Cannibal of Ajax”, and he received a suspension and a fine. “It was a spur of the moment thing,” Suarez has explained, “and one of those things you regret afterwards.”

During his time in Holland, and particularly in Amsterdam, Suarez managed to develop and mature as a footballer. “I saw Holland as a great school,” he has said, “I learned so much in my time in Holland…I was a selfish player. But they taught me the importance of being part of a team…But from all of them I learned about remaining calm on the pitch; when in front of goal and also when being fouled. You have to try not to react; take a step back. I learned to control my attitude more.”

Some may question how much control Suarez actually learnt, he is still known for his overreactions and on-field antics. However, “If you had seen me before,” Suarez says, “you’d realise that I used to be even worse.”

Suarez grew up in Montevideo, Uruguay. “When I was a kid I had to fight for everything”. El Pistolero poco, the little gunslinger, was offered a position in a Uruguayan football academy at 11, but was unable to attend because his family could not afford it. “It was very hard for me as a kid to get through as a footballer in Uruguay.” Suarez explained, “from time to time I do remember playing without shoes. I had a really hard time growing up, we were a large family and we didn’t have much money at home.”

Suarez joined the Nacional junior team at 14, at 15 he was charged for head-butting a referee. Three years later Suarez mad his first team debut, and after another year he was playing in Holland. In 2007 Suarez received a red card in his first appearance for his national team. After a spectacular World Cup performance in 2010, Suarez was a key player in Uruguay’s 2011 Copa America tournament.

Suarez’s first goal of the tournament came in the opening match against Peru, although Uruguay conceded a goal and drew the match 1-all. After another draw and a win, Uruguay scrapped through the group stage in second place. La Celeste defeated the host country Argentina in a penalty shoot-out in the quarterfinals. El Pistolero knocked two past Peru in the semi-final, and was named ‘Man of the Match’. In their 3-0 final victory over Paraguay, Suarez scored the first goal. Uruguay won the tournament, and Suarez was named the ‘Most Valued Player’.

His name is Luis Suarez

And he wears the famous red

When he scores a volley

Or when he scores a head

He scores a goal

And the kop goes wild

During an October clash against Manchester United last year, Suarez was accused of racially abusing Patrice Evra. He was found guilty by the FA and charged. In his defence, Suarez explained that “negro” in Spanish has a different meaning to the same word in English. “In Spanish, in Latin America, there’s a way of speaking that is totally different. There are words you can say here that you could not say there and vice-versa. They would be taken in a totally different way.”

Several managers and media pundits have also labelled Suarez a diver. And with footage like this, it is hard to disagree. “There are people who criticise me and that’s normal because of the way I am on the pitch. I get angry, I get tense,” Suarez has said, “I have sacrificed so much to be where I am and fought so hard for it.” Suarez may dive, he might bight and head-butt players and referees. It is because of the amount of passion he plays with. He has worked so hard to get to where he is, from playing bare-foot football in the streets on Montevideo in Urugay, to wearing the famous read and scoring in front of the Kop.

Some see Suarez as a villain, others see him as a hero. But everyone can see the amount of effort and determination he puts into his game. “People say to me: ‘How can you run so much, how can you suffer so much, how can a defeat hurt you so much?’ Because there is so much effort and sacrifice behind it.”