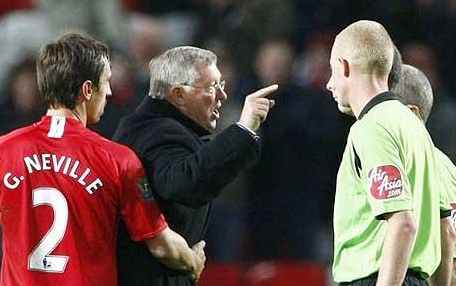 I suppose the death of Margaret Thatcher was much like the passing of Sir Alex Ferguson at Manchester United. Like Thatcher, Fergie had his fans: 800 million of them, or so we’re told. And like the Baroness, he also managed to piss a lot of people off – people like me.

Over the past few days, we’ve read endless tributes to the old grump.  “Best manager ever,” I’m told. Well maybe he is. But I’m not here to eulogise old Sir Alex. So we’ll launch straight in.

Referees. When referee Jeff Winter handed Roy Keane a red card, he wasn’t assigned a United game for the following two years, following a judgement from his Lord Justice Fergie. Winter later noted that the Football Association – run, partly, by board member and United Chief Executive under Fergie, David Gill – “is reticent to give Manchester United games to referees that Ferguson has criticised in the past”. Oh, and let’s look at Alan Wiley. Fergie lambasted Wiley for apparently being “fat and unfit” after his team could only draw with Sunderland. Wiley “agreed” to retire at the end of the season. Coincidence?

And then Mark Clattenburg oversaw the 6-1 hammering at Old Trafford that United received from Manchester City at the beginning of the 2011-12 season. Fergie criticised Clattenburg (and his players, which is unusual). Clattenburg didn’t oversee a United game for the rest of the season.

Basically, Sir Alex always gets his way. And that’s annoying, because fair play is quite an important thing in sport. This frustration is heightened because, like any great dictator, he then claims to be the supreme moral arbiter. He throws tantrums over inconsequential refereeing decisions with the frequency of a whining toddler. It’s always their fault. And then he’s praised for defending his team. We also end up with entrenched institutions such as “Fergie Time”, the doctrine being: don’t blow the whistle till United score, whatever the clock says.

Ferguson is puerile. He defied his non-negotiable obligation to be interviewed by the BBC for years because they broadcast claims that associated dodgy dealings with his son. It was pathetic. But also outrageous – would any other manager have got away with it?

Fergie’s also a humourless hypocrite. He criticised Real Madrid for tapping up Cristiano Ronaldo, forgetting his similar tactics with regards to Wayne Rooney. And his gum-chewing, hairdryer-spurting, watch-checking touchline antics are infuriating to behold. His persistent pestering of the fourth official is as aggressive as it is maddening.

Yet, fundamentally, my unashamed sour grapes with Fergie stem from his success: he’s a winner. Plenty of managers stroll provocatively down the touchline, but none can do so with such irritating and assured arrogance as Sir Alex can.

He’s won absolutely everything and engineered the most prosperous sports brand in the world. I live in South West London, very near three Premier League teams and plenty further down the divisions. And yet there exists a sizeable group of Manchester United fans. Yes, no one takes United fans seriously – how can you? But their mere presence is a mark of the team’s worldwide success, a constant reminder of Fergie’s unfailing superiority.

I hate Sir Alex Ferguson; this isn’t mere dislike, but a bitter resentment that has been built over many painful years. I hate him even more for having to write ‘Sir’. Soon, even more annoyingly, to be ‘Lord’ – the thought of Fergie passing the laws that govern me is beyond humour.

He’s frustrating because of his antics, because of the refereeing injustices, because of the last-minute winners and because of the “fans” that follow him with idolatrous fervour. Would I care if he had been unsuccessful? No. And that’s the most annoying part. The mere act of me writing this is a concession to his triumphs.