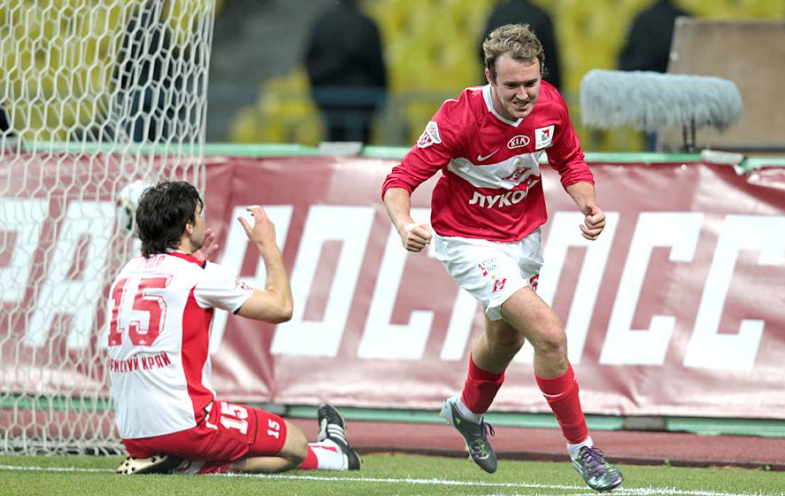 At times last week (Saturday 11/05) it seemed as if there wasn’t even a game on in Luzhniki. Playing their last game at the cavernous ground Spartak didn’t put on a display to bid farewell and excite the fans, instead they looked much as they had been for the last couple of years, leaderless, clueless and spineless.

Last week’s expulsion and subsequent banning of Aiden McGeady meant they were left without a player with the bottle to take on defenders and throw himself into the game. His team-mates certainly did take on the second part, with a slightly different trajectory. The examples of diving and play-acting reached a crescendo in the dying seconds as Jose Manuel Jurado chased the ball back on the right wing, was easily dispossessed and threw himself to the artificial turf, allowing the Samara player to launch a nearly costly attack on the Spartak goal. Not even the most hardcore Spartak fans were defending his actions and subsequent inaction.

It has been so with Spartak for too long. A club without silverware for almost a generation and seemingly hanging on for the move to the under construction “Okritie Arena/Stadium” in the suburb of Tushino. They’re building, always building, while everyone waits for the finished product. Instead of bringing in a new generation of fans who have moved up in the world and on with their ideology, this season marked more lows in how the Spartak “fans” show their love for the club, and none of them attractive for new fans to push the club on. On the Sunday after the match, walking along the bank of the Moscow river opposite Tushino, I saw at one end of the old airfield abandoned planes. At the other the skeleton of the new stadium. It was there in Tushino where the Soviet Air Fleet Day was annually held, showing off the latest in USSR-built air power triumphs of Soviet aviation and military advances. Now the Ilyushin-14 that sits restored in the area will be testament to a new form of entertainment and not one that will be as energising as 22 years ago.

In 1991 an ambitious local invited legends of rock like AC/DC, Metallica and Pantera to the airfield to host the first Monsters of Rock in the former Soviet Union. Figures range from between 150-500,000 of punters who showed up for the event, yet Spartak will soon have the opportunity to surpass this flash in the pan by bringing tens of thousands in every second week in the season and turning a fertile hunting ground in North-West Moscow into their domain. And yet, and yet. Who in their right mind would run the gauntlet of showing up to stand (the “real fans” won’t sit) next to people who chant “White Power” when they’re going to away matches in Europe, make monkey noises or obscene chants, and who misbehave in shows of club love when things don’t go their way. It’s not a place to bring children and it doesn’t inspire players either. Yet club officials won’t confront it.

Nothing on or off the field suggests that the tens of millions pumped into the club by oligarch Leonid Fedun is achieving the required results. Frequent spats with other clubs and the FA by Fedun and his club officials do not improve or even begin to rehabilitate the image of Spartak in the neutral or opposition eyes. And more worrying, yesterday (Friday 17/05) Fedun stepped down from his position in Lukoil, the company he co-owns and from which he finances the club, such events too often have dire consequences. While opponents will always go against them, losing the neutrals is what Spartak cannot continue to do. When their fans regularly smash up seating in their own and host stadia, cause fights in the street and misrepresent what the club stands for, it’s not only the club name but brand that loses value and in pure business terms club branding is going to be more and more important as FFP and reality dawns on Russian clubs.

Ultimately it is all about leadership and the lack thereof. The lack of a personality or leader to grab the game by the scruff of the neck with visitors Krylia Sovetov visibly wilting in the muggy Moscow heat cost Spartak the win. Leadership and direction on the pitch is a mirror of what is going on off it. It is not for nothing that Alex Ferguson and the Manchester United Directors achieved such success for a long period, there was communication, cohesion, trust and belief – everyone knew what their job was and they got on with it. In Spartak, and other clubs who find themselves off the pace despite sufficient investment in operations, such best practice is rarely followed…

As I stated before, Valery Karpin is one of the gentlemen of Russian football and at any other club would be a successful Coach or GM, but he wouldn’t be both. As a player he had vision, intelligence and class, as a person he has the same, plus he’s a nice guy. A former colleague, now back coaching in Ireland, told me (when a club officer stated that a certain first teamer should be treated nicer as he was a “nice guy”) “Alan, we can have a team of nice guys and win nothing and we’re both out of a job, or we get players in who can do a job and stay working.” I agreed with him then and I agree with him now. How Spartak long for a Roy Keane on the pitch and a Sam Allardyce off it, yet the majority of “fans” who come to matches waving red scarves wouldn’t want to build, they want to win because it is the right of Spartak to do so, yet in their hearts they know that something major has to change, and fast. With a new stadium to move to, it could prove a fitting coffin on the banks of the Moscow river if the club flotation takes it the way of Hajduk Split or worse, Portsmouth.