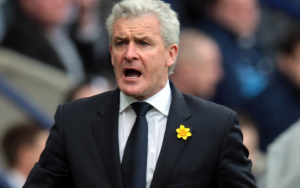 As Mark Hughes prepares to add Stoke City to his growing list of Premier League management roles, his appointment has split opinion amongst supporters, with one being driven to a slightly comical yellow van based protest.

It is an appointment that is a gamble for both sides, with Hughes knowing he must wipe a disastrous spell at QPR from the memory, and the club needing to improve a squad that stagnated under Pulis if they are to stay in the Premier League. However, it is a gamble that could pay off, with Hughes’ style and experience a better fit to the style of the team than other candidates, providing hope that he can reproduce the work he undertook at Blackburn and Fulham, rather than his spell in charge of crisis club QPR.

The appointment is a crucial one for Stoke, and the appointment of Hughes to replace his fellow Welshman is seen as a gamble by many. Hughes lasted less than a year in his last role and left Loftus Road with The Hoops rooted to the bottom of the table. Following on from a poor second half of the season, Stoke’s squad needs an overhaul if they are to avoid a relegation battle. This season’s side was based on a strong defence, but lacked bite going forward, particularly in wide areas. Whilst the release of high earners, such as Michael Owen and Jermaine Pennant, alongside the promise of a transfer kitty, will allow the new manager room to put his stamp upon the team, the ability of Hughes to deliver such an overhaul has been questioned by many. Hughes oversaw much of QPR’s infamous spending spree, bringing in the likes of M’Bia, Park and Granero as part of a £30 million summer outlay, and won’t be allowed the same freedom at Stoke, a side who have themselves wasted millions in recent years.

Hughes is also taking a risk in accepting the job. Having failed at QPR, he must surely be regretting the decision to walk out on Fulham after 11 months in 2011, citing a lack of ambition, and will be acutely aware that his next move could be his last. Whilst he can be forgiven failing at QPR, a club in freefall, his reputation would struggle to take another hit, and failure at Stoke could signal the end of his medium term Premier League ambitions. He is taking on one of the tougher jobs in the league, which will be made tougher by fans initial sceptism over his appointment. The board clearly feel Pulis had taken the team as far as he could, but whether the Pulis ceiling and the Stoke City ceiling are at the same level remains to be seen. With fans growing used to mid table finishes, Hughes may struggle to manage their expectations on a lower transfer budget than the Pulis years.  Whilst fans and management alike will be justified in believing that they have enough to finish above the likes of Hull and Crystal Palace, a bad start could cause pressure to escalate in the Potteries. Hughes will be allowed little room for error in his signings, particularly with memories of Jose Bosingwa fresh in the mind (incidentally, Stoke are in need of a right back …)

However it is worth remembering that Hughes successfully operated under similarly modest budgets at both Blackburn and Fulham, unearthing talent that allowed both sides to compete in the top half of the league. Stoke chairman Peter Coates calls Hughes the “right fit,” and points to his success at similar sized clubs. Hughes also better fits the clichéd Stoke style of play. Whilst long ball is by no means ingrained within the club, an adaption to a Roberto Martinez style of playing out from the back could have been a step too far, with Hughes favoured style more of an evolution than a revolution. Hughes is also by far the most experienced option, and there hasn’t been a plethora of alternative managers for Stoke to choose from. Benitez was never a realistic option, whilst Di Matteo was rumoured to be cold on the prospect, leaving the usual uninspiring suspects.

Whilst Hughes may not inspire the imagination, he is experienced at Premier League level with multiple clubs, and provides less of an unknown quantity than wildcards such as Gus Poyet. Such an appointment could go either way, with several Paul Ince at Blackburn type failures for every David Moyes plucked from lower leagues. Hughes’s appointment hasn’t inspired many, but provides a safe option that can build on the work of Pulis.