“I know at our best we can beat everybody”

The post-match words from boss Frank De Boer as the Netherlands secured qualification to the last 16 after defeating Austria 2-0 in Amsterdam on Thursday night. De Boer’s a manager growing in stature with the start his team have made in the tournament. Selection decisions coupled with a disappointing draw against Scotland had deflated expectations of how competitive the Netherlands could be at Euro 2020, but with back-to-back wins against Ukraine and Austria and the knockouts looming- how far can the Netherlands go?

De Boer has overseen 13 games since his appointment last September. The first nine games of his reign saw the Netherlands adopt a 4-3-3 yielding just four wins. This was perhaps the catalyst for the surprising change to a 3-5-2 just 11 days before their first match at Euro 2020. The Dutch faithful have been less than inthused with the shunning of 4-3-3, but arguably it’s been their strongest asset.

The cliché goes if your defence isn’t up to scratch you go to three at the back. Those fears appeared warranted when the Netherlands surrendering a two goal lead to Ukraine in their opening match, rescued by a late Denzel Dumfries header. Their second game saw a much-needed improvement with a much-welcomed clean sheet, albeit against a conservative Austria sidek but is the Dutch back line strong enough when the tests get tougher?

At 39 and 6ft 6”, Marek Stekelenburg has had something of a renaissance season, moving back to Ajax after just 16 appearances over four seasons at Everton. The ‘keeper brings a wealth of international experience including a World Cup final and with a strong end to his domestic campaign at Ajax his presence in net should not provide too many problems. 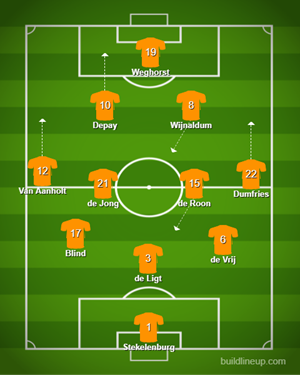 The back three aren’t short of international experience either, accumulating close to 150 caps between them. Admittedly 80 of those come from the ever-present left-sided centre back Daily Blind. Inter Milan’s Stefan de Vrij came back into the right side of defence last night adding some much-needed composure to the back line. There is no doubt wonderkid Matthijs de Ligt is the nucleus of the defence. At 21 his committed defensive displays have already earned him Eredivise and Serie A titles with Ajax and Juventus respectively. As a trio this back line shouldn’t cause Dutch fans too much angst. The only potential concern could be the pace of strikers in behind which the Dutch seem to be cautious of- using de Ligt as a sweeper.

With three at the back there is a real onus on the wing backs to produce both going forward and defensively, so far free agent Patrick van Aanholt and PSV’s Denzel Dumfries have been magnificent. When attacking, the Dutch 3-5-2 has been transformed to a 3-2-4-1 with van Aanholt and Dumfries creating width, getting balls into the box and making busting runs to the back post. That last point has been Dumfries party trick, scoring in both games including the match winner against Ukraine.

The wing backs have proven they have the ability going forward but there are still challenges defensively. You fear against stronger, possession-based opposition this system could pin the Netherlands to a back five. This throws up significant questions, does Dumfries have the ability to defend against Italy’s Spinnzola and Insigne overlap? On the other side, can van Aanholt, who has never gained many plaudits for his defending fend off the likes of French partnership Hernandez and Mbappe? You fear the Netherlands could lose this creative threat if they can’t control the midfield and get balls out wide.

The midfield partnership of de Roon and de Jong has looked strong in early phases of the tournament. Well balanced with de Roon holding, enabling de Jong to roam and carry the ball forward effortlessly well. Gini Wijnaldum has been a beneficiary of this partnership, allowing him a more attack minded role on the right of an attacking two. This has enabled the former Liverpool man to get in and around the box, already resulting in a brilliantly composed finish against Ukraine. The system allows him to slot into a three out of possession to go into the more conventional 3-5-2 formation which has enabled the Netherlands to deploy a very effective counter press as they demonstrated against Austria.

Memphis Depay on the left of the attacking duo has to be one of the biggest attacking assets in the tournament. The Lyon striker harbors pace, skill and the ability to finish, he is sure to take confidence from his well-taken penalty against Austria.

That brings us on to the Dutch striker, Wout Weghorst, a typical number 9. The striker appears little more than a target man but is probably more potent than people suspect with one in two for Wolfsburg in over 100 games in the Bundesliga. Incredibly powerful in the air and equipped with the necessary hold up play to bring Wijnaldum and Depay into the game, he’ll be a key presence at the top of the pitch if the Dutch are to progress far.

The starting 11 is certainly amongst the strongest in the tournament, a squad of quality players applying their trade across the top leagues in Europe. However, tournaments are grueling, especially this one with the extended domestic season. With this comes inevitable injuries and the need to rotate, is there quality in depth across the squad? Nathan Ake is a strong left sided centre back to call upon but was limited to little game time last season at Manchester City. Ajax midfielder Ryan Gravenberch and PSV forward Donyell Malen have shown signs that they could play a big role in the future of the national side. Regardless, you can’t help but feel there isn’t the depth in the Netherlands squad compared with tournament frontrunners France, Portugal, England and Italy.

North Macedonia are the lowest ranked team in the competition and also the final group game for the Netherlands. You would have to heavily assume the Dutch will finish the group with nine points topping the group. This all gets heavily hypothetical but with the four best third placed teams going through there is a multitude of scenarios that could occur. Realistically the toughest test the Netherlands would face in the last 16 would be Germany or Croatia, both teams that lost their first matches. Winning that would set up a quarter final against the winner of Match 37 which looks like it could be either Wales or Russia. The draw of course can only be predicted to a certain extent but there appears a relatively clean route to a semi-final for the Netherlands.

Getting to the semi’s would have to go down as a very positive tournament for the Netherlands. With a squad in transition and an increasingly likely change to their footballing identity from Frank de Boer. At this early stage it is worth crediting de Boer for the change, with the pressure of demanding Dutch fans on the back of a terrible run of domestic club jobs you could forgive de Boer for attempting to appease fans, but he hasn’t and the 3-5-2 / 3-2-4-1 has been central to the good start to the tournament. If the wins continue to come and confidence blossoms maybe they can go further and surprise us all?