As Fernando Torres trudged off the pitch at the Ellis Park stadium last night, many people ignored the fact that a clean-shaven Cesc Fabregas had taken his place. An inquest had begun after another lacklustre performance and another early withdrawal. A nation tore its hair out as pundits and commentators were lost for answers. From the Ellis Park stadium to the Vicente Calderon right through to Anfield people were asking: “what on earth has happened to Fernando Torres?”

The fact that Spain manager Vicente Del Bosque had to give the striker a vote of confidence before the match illustrates just how disappointing Torres has been at this World Cup. The once potent menace of the Liverpool front-line has seemingly been neutered. Seeing Torres struggle last night against the organised but unimposing Paraguayan defence made it hard to recall the player who struck fear into the heart of the fumbling Nemanja Vidic on more than one occasion.

Many fans and pundits alike put it down to fitness, but is the reason for Fernando Torres’ unfortunate plight the very nature of the Spanish “tika-taka?” Does the pacey and direct centre-forward fit the classic Spanish model of diminutive dynamism and has Fernando become so well adapted to the Premier League that his touch, like most of the England players, has deserted him in a league where pace and power are valued over technique?

If we look at a typical Spanish line-up at this World Cup and a typical Liverpool line-up from recent seasons, Torres appears to be playing the same position but it is questionable whether he plays the same role. 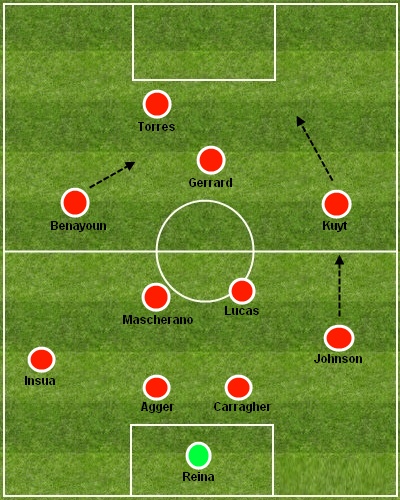 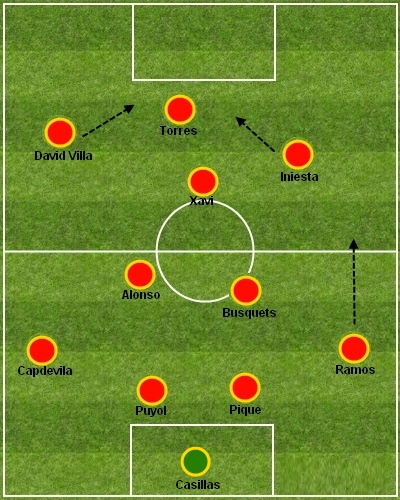 In the Liverpool line-up Torres occupies the role of the main goal getter. His direct threat is complemented by the trickery of Yossi Benayoun (until last season) and the efficiency of Dirk Kuyt and Steven Gerrard is primed with the objective of the marauding “captain fantastic” role that England fans are still so desperate to see. The Liverpool team is very much built around the talents of Gerrard and Torres, Gerrard providing the drive and Torres providing the finishing and, ultimately – the goals.

Torres’ role in the Spanish side is slightly different. Spain’s favoured “tiki-taka” differs from the Liverpool model of working the ball from deep midfield with Mascherano to the front allowing Torres to take advantage of the space behind the opposition defence  for a scoring opportunity or to assist his colleagues. Spain play the pretty passing game that may not favour Fernando Torres. His role of poaching in the Liverpool side is taken up by David Villa and Torres is left to worry defenders and cause gaps for the like of Andres Iniesta and Villa to occupy and take advantage of. When Sid Lowe, in his Guardian column, described Torres as the Spanish Emile Heskey many cast suspicious glances in the way of the article but there is some sense in the notion. Torres provides the pace and the brawn of the Spanish front line, much like Heskey, which is supposed to grant freedom to his national team colleagues whereas for Liverpool, Torres is granted the space by the passing of his midfield as the faster tempo of the Premier League attacking play suits his running.

Torres is the exception to the rule in the Spain attacking line-up featuring the pocket-sized talents of Villa, Iniesta and Xavi. He does not fit with the Spanish model of success and appears to be hopelessly out of form in a team dominated by Barcelona players trying to play the football preached by Pep Guardiola and Johann Cruyff. It is interesting to note that the two players who appear most out of form in the Spain side are Torres and his former Liverpool team-mate Xabi Alonso. Alonso is, inadvertently, breaking up the rhythm of the Spanish side as his more direct passing is out of tune with the intricate game of the Barcelona players. Two players tainted by the pace and the directness needed in the English league?

Torres’ game is complemented by the Premier League. In his Liverpool team he is not required to slow the play down or keep the ball; his brief is to attack and to score goals. The poor first touch and technique that Torres has shown so far this summer may not be something that has just appeared. His national team colleagues require a forward to be able to contribute to the free-flowing play that Torres is not accustomed to. Playing in the Spanish league Xavi, Iniesta and Villa each benefit from a slower pace than the Premier League, a pace which requires touch, poise and balance and a brain to anticipate the gaps in the opposition back-line. Torres, however, is accustomed to a much more explosive pace where a first touch may be to steady himself for a thunderous shot rather than to beat a man or find a penetrative through ball. The suspicious curse on a number of Premier League players unable to adjust to the demands of the World Cup and national teams that favour different tactics and footballing philosophies may have struck Torres.

Vicente Del Bosque will be desperately seeking a solution to the Torres question in the build up to the much vaunted semi-final clash with the Germans. Unfortunately for Spain and for my strained analysis it could just be down to the fact that Torres has been playing with injuries for the past fifteen months.

15 thoughts on “How do you solve a problem like Fernando?”