Emile Heskey’s inclusion in the England setup has been the subject of much debate for the best part of a decade now, but Liam Stoker believes the striker has a massive role to play ahead of this weekend’s World Cup opener. 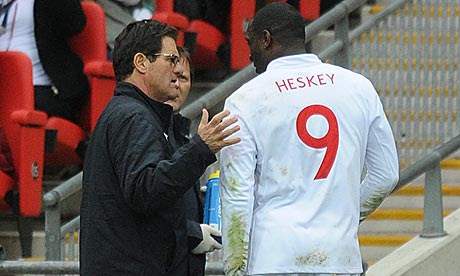 When Capello agreed to take the poisoned-chalice of leading England into a World Cup, I highly doubt he expected his greatest headache was to come from the inclusion of a centre forward with just six goals to his name this season.

The problem posed by Heskey is one of strengths and weaknesses. He has hardly ever been a substantial goal threat; he’s not capable of a spark of momentary magic worthy of winning the Jules Rimet trophy this summer. He is, however, more than capable of facilitating that spark.

Wayne Rooney, the talisman of the England squad, has the weight of a nations hopes and expectations on his shoulders and Emile Heskey, with his giant, domineering frame, is the perfect foil to help prop them up. He was integral during qualification, the hustling and bustling target man that created space and goal scoring opportunities for others.

With Heskey by his side, Rooney scored nine goals in ten games and, truth be told, England looked more consistently threatening than they have for a decade before. Tactically, it was more common sense than a master stroke. Heskey alleviates the mantle from Rooney, takes at least one of his markers out of the equation and creates ample space for him to work his magic. It’s worth nothing that even Lionel Messi, the absolute certainty for the 2010 Ballon D’or, struggles without the masterful Xavi alongside him.

No, Heskey will not be amongst the goals in this tournament, nor any other tournament for that matter, but his ability to open doors for Rooney is one that simply cannot be overlooked. And by “open doors,” I of course mean “smash through them with brute force.”

The first third of the pitch shouldn’t, thankfully, pose as many problems. We’re still unsure as to which goalkeeper Capello will plump for, but with Ferdinand’s unfortunate injury at the legs of Emile Heskey, the defence now picks itself.

Ledley King will partner John Terry for the majority of games, with Upson the likely candidate to replace King whenever those pesky joints forbid him from playing. Cole and Johnson will occupy the full-back positions and offer genuine width and attacking prowess. This in itself, however, poses several options for Capello to ponder.

With Cole and Johnson so forward-thinking in their play, they can either perfectly compliment wingers further up the pitch, much like Evra does at Manchester United, or create the width themselves, much like the Brazilian Carlos and Cafu of old. This would release Rooney from the inside-left berth he occupied during qualification, free Steven Gerrard from the shackles of the left-wing and have him deployed in his natural position behind Rooney and Heskey.

That would, however, leave England prone to a swift counter-attack with a creaking central defensive pairing without genuine pace. It’s certainly a more attacking system that could be deployed against teams with a more cautious approach, but not one to be entertained when England come up against opponents with a definitive threat going forward.

This leaves a more familiar tactic to be utilised, one that compliments the midfield and utilises Rooney at his most potent.

Presuming Gareth Barry recovers fitness in time for the knock-out stages of the tournament and providing England qualify, He should adopt the defensive role in midfield that he has proven himself more than adept in. Frank Lampard and Steven Gerrard would then be free to occupy roles in the centre of the park, safe in the knowledge that Barry is behind them providing defensive cover.

With Barry, a naturally left footed player, sitting in midfield, this should allow Ashley Cole the added freedom to get forward with Barry covering his position on his forays down the left flank. Aaron Lennon and Wayne Rooney should be operating just behind Emile Heskey, Rooney in a far more advanced, tucked in role in the “inside forward” position, while Lennon can be given the freedom of the right wing. In the event that the system needs an injection of creativity, Joe Cole is the perfect impact sub to take Lennon’s position.

This system is essentially a 4-3-3 when we’re in possession, but one that can easily collapse into a 4-5-1 when we’re defending and remain resolute throughout 90 minutes. With Barry sitting in front of the defence, with Gerrard spare should the need arise; a defence that can look prone is protected while the full-backs, Rooney and Lennon are more than capable of providing a respectable counter-attacking element.