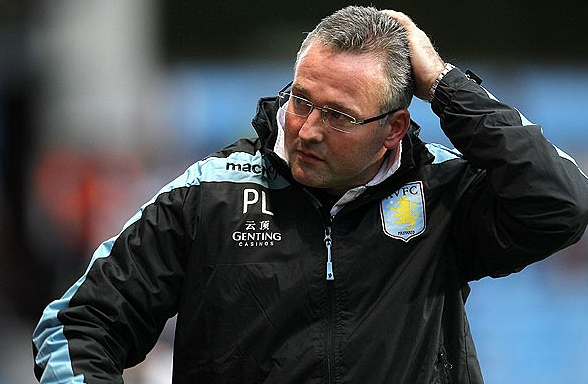 It could perhaps be the understatement of the century when stating that Aston Villa are having a largely torrid season. Paul Lambert’s side currently sit in 17th position in the Premier League with just 20 points to show from 23 matches, with most people wondering where it is going wrong for the side from the Midlands.

Most pundits and football experts have identified a distinct lack of experience in the side as being the main factor for the dreadful run of form which has left them sitting just outside the relegation zone. Players such as Ciaran Clark, Eric Lichaj and Nathan Baker have all come through the club’s youth system and with all three of these playing a part in the defensive line of Villa this season; fans may be rightly worried about the leadership qualities of the youngsters. Nobody doubts that these players may one day turn into top Premier League professionals but in order to fulfil their full potential some may argue that they need an experienced figure to play alongside in order to understand the game better. However, Lambert has done away with this idea and decided to throw them in at the deep end, something which has not aided defensive displays in recent times.

It is not just the players who have come up through the ranks that make the youngsters in the side with pretty much all summer signings having little or no top division experience. Full backs Joe Bennett and Matthew Lowton joined from Middlesbrough and Sheffield United respectively, as well as Crewe captain Ashley Westwood and Chesterfield striker Jordan Bowery. Arguably, Lambert’s best summer edition Christian Benteke is also just 22 years of age.

With this being the case, the Aston Villa boss may look to more experienced players in the hope of turning around results. The problem being that these players usually cost a lot of money, something which Villa sadly lack. But this shortage of money has not stopped rumours floating around regarding several supposed targets; one of these being striker Louis Saha. Saha has an abundance of top flight experience with the likes of Manchester United and Fulham, but the Frenchman has struggled to hold down a first team place at his latest club, Sunderland. Despite not scoring a goal this season in 11 outings, Saha has scored an impressive 112 goals in English football since joining Newcastle United on loan from Metz back in 1999. The former Tottenham Hotspur and Everton forward could be exactly what Villa are after with relation to experience, something which could also help to improve the games of the promising Andreas Weimann and Jordan Bowery. This deal is not impossible with Black Cats manager Martin O’Neill telling Louis Saha he can leave the club this transfer window for free.

Norwich striker Steve Morison has also been linked with a move to Villa Park, a rumour which could have more than a degree of truth about it. It would see Morison reunited with Lambert who splashed the cash to bring him to former club Norwich from Milwall. The Welsh attacker has fallen out of favour with new Canaries manager Chris Hughton, therefore limiting him to just 13 appearances this season; many of which being as a substitute.

Another striker who The Villains have been linked with is Stoke City’s Kenwyne Jones. Jones is a proven striker at this level but with City having other strikers such as Peter Crouch, Cameron Jerome, Jonathon Walters and even Michael Owen, they can afford to let the Trinidadian forward leave the club. The ex-Southampton player has caught the eye of many Premier League managers over this window and is believed to be available for around just £3 million. Something which has been mentioned in the tabloids is a possible deal between Aston Villa and Stoke involving Kenwyne Jones and Darren Bent. Bent has not played a lot this season, with rumours circulating that he has had a falling out with the Scottish manager. This being said, it is not out of the question that they will listen to offers for the England international.

In terms of strengthening a somewhat weak defence at the club, an experienced defender who could be available relatively cheaply is Paulo Ferreira. The Chelsea full back has spent an incredible eight years with the London club but with money seemingly not being a worry at Stamford Bridge, it is believed that they will let the Portuguese full back leave for under a million. Ferreira, 33, could be an ideal player for struggling Villa with him having both Champions League and UEFA Cup experience in the past, as well as winning several trophies. However, Lambert may be reluctant to replace Joe Bennett and Matt Lowton whom he has shown faith in so far this campaign.

A more central defensive figure who many would believe to be a fantastic signing for Paul Lambert is Joleon Lescott. Lescott, who formed a solid partnership with Vincent Kompany at Manchester City, a partnership which helped City gain the Premier League title. However, the England centre-half has not been a regular this season, with Roberto Mancini preferring to call upon the services of Matija Nastasic who joined the club from Fiorentina in the summer. Young player Dedryck Boyata who can play in the middle of defence has been recalled from his loan spell at Dutch club FC Twente with rumours mounting about possible destinations for Lescott. The former Everton defender could potentially join The Villains in a loan deal until the end of the season, meaning a transfer fee as such would not have to be paid.

With midfielders such as Fabian Delph and Ashley Westwood, a more experienced player could be exactly what Villa need in order to turn results around. One possible option could once again lie at fellow Premiership club Stoke City, with Wilson Palacios being touted as a signing. Since joining The Potters, Palacios has struggled to reclaim the form he had at both Wigan Athletic and Tottenham.

Because of this, many believe that the Honduran would be allowed to move on for a relatively small transfer fee. His potential signing could also be aided by another experienced player, this time in the form of Andrey Arshavin. The Russian enjoyed such a brilliant start to his Arsenal career with an incredible four goals at Anfield in just one match, but since then the little winger has been in and out of the team regularly, sometimes even struggling to hold down a place on the bench. Rumours have circulated around the future of Arshavin for many transfer windows but most believe the time is now right for him to move on in order to pursue a new challenge.

Foreign stars Derek Boateng and Moussa Sissoko have a bundle of interested parties in terms of Premier League clubs but with both commanding somewhat expensive fees it is perhaps more unlikely that these players will be sought after by Villa. One realistic foreign player who could be making his way to Villa Park in the not too distant future is Tim Cahill. Cahill, who has just completed his first season in America’s Major League Soccer, is reportedly looking to keep himself fit during the off season by joining a club outside of the US on loan. Sunderland ended their interest in the former Everton and Milwall man after signing Alfred N’Diaye from Bursaspor for an undisclosed fee. This could leave the door open for Villa, who may offer the Australian a route back into English football.

One thing for certain is that Aston Villa will be praying that their more experienced players regain fitness quickly. Charles N’Zogbia and Gabby Agbonlahor have both recently returned to action, with Richard Dunne and Darren Bent still to shake off injuries which have plagued their seasons. If Villa do not strengthen in January it is a definite possibility that they may stay down the bottom of the table, something which will leave manager Paul Lambert looking nervously over his shoulder and at the same time, fearing for his job.