Honduras will take part in their second-ever World Cup this summer, making their first appearance since 1982.

With a fantastic goal scoring record at international level, the experienced Carlos Pavon will be looking to fire Honduras into the last 16.

Experienced is perhaps an understatement, the 36-year-old has taken in 19 different transfers over his career that has panned over 18 years, never spending more than two years at one single club.

During his colourful career Pavon has played for clubs including Udinese, Napoli, Real Valladolid and the LA Galaxy. It was at the Galaxy were Pavon linked up with David Beckham, the Honduran scored two goals on his debut, both direct from a Beckham supply line.

The much-travelled striker’s goal record for his country though (57 goals in 98 games) suggests he could have become a star if he had settled at one particular club.

Despite reaching the veteran stage of his career, Pavon picked up the Honduran player of the year in 2009 and netted seven goals in qualifying for the 2010 World Cup, demonstrating there is still much more to come from the centre-forward.

Although many across the world will be yet aware of his presence, Pavon was voted the most popular player in world football in a poll run by FIFA last January, beating Turkey’s Arda Turan to the award.

In a group containing Spain, Chile and Switzerland, there’s no reason why the Hondurans can’t compete for the second qualifying spot in Group H. Famed for his hopping on one leg celebration, Pavon’s goals will have to play a big part if the North American’s are to triumph in South Africa.

Famed for scoring the first-ever goal at the new Wembley stadium, and indeed subsequent hat-trick, Giampaolo Pazzini will be looking to make the step up to the Italian first team. 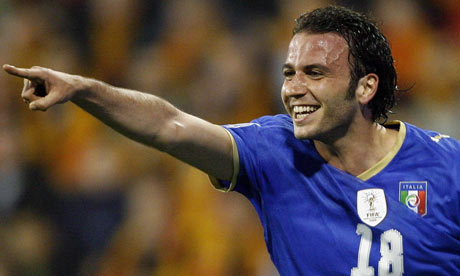 His record came in an under-21 match against England back in 2007. Coincidently, the forward also bares another distinguished record to his name, albeit not one he may be particularly proud of. He became the quickest player to be sent off in Italian international history when he received his marching orders against the Republic of Ireland in 2009 for elbowing John O’Shea.

After beginning his career at Atlanta, Pazzini moved to Fiorentina. While his performances in Florence promised much he was often overlooked in favour of Luca Toni, and then Alberto Gilardino and Adrian Mutu, resulting in a move to Sampdoria.

The 25-year-old, who comes alive in the opposition penalty area, a typical ‘fox-in-the-box’ striker, is predominately right-footed but it has been argued that he relies on good service for the Italian to prosper.

However, the forward has scored 19 goals for his parent club Sampdoria this season, helping to catapult them into the fourth Champions League place in Serie A. In fact the new Juventus manager, Luigi Del Neri (who left his post at Sampdoria), has earmarked Pazzini as one of his first signings as he looks to re-build the Old Lady.

Although a place in Italy’s forward line could be hard to come by with Marco Borriello, Antonio Di Natale, Alberto Gilardino, Vincento Iaquinta, Guiseppe Rossi and Fabio Quagliarella all to dislodge. It could be an achievement within itself for Pazzini to even make the final 23.

But with 30 goals in 56 games overall for Sampdora it’s difficult to ignore the 5ft 11in talisman.